Trans-thoracic echocardiography and resting EKG did not revealed any significant abnormality. Exercise test was posivitive in the chest leads. She was being treated with aspirin, beta-blockers, and a statin.
Angiography
1) No evidence of epicardial CAD; however, there was a fistulous communication between the diagonal branch arising from proximal left anterior descending artery and the pulmonary artery (Figure 1). 2) The right coronary artery was normal (Figure 2)
Procedure
Just before the procedure, 5000 IU heparin was given as a bolus. An extra-back up support 6 Fr 3.5 EBU guiding catheter was engaged into the left main coronary artery, and a 0.014" BMW 190cm guidewire was introduced through the diagonal branch and into the fistula. Then the doc extension was connected so that an over-the-wire excelsior micro-catheter could be advanced in such a way that the distal tip was very close to the fistula, as confirmed by dye injection. The BMW guidewire withdrawn keeping the micro-catheter in situ. (Figure 3) The diameter of diagonal branch just proximal to the fistula was estimated to be about 2mm. (The coil diameter must the bigger than the diameter of the diagonal branch in fully expanded condition.) With the help of a coil pusher, two BostonScientific fibered platinum 3x4mm microcoil were pushed through the micro-catheter and into the fistula site.(Figure 4, Figure 5) After a few minutes wait, the fistula was not completely closed. (Figure 6) Finally, a third coil was embolized into fistula site; and after 5 minutes, angiography revealed that the fistula was completely closed with no significant dye wash out from the diagonal to the pulmonary artery through the fistula. (Figure 7) The micro-catheter was the withdrawn .
Conclusion(s) / Result(s)
The course was uneventful, and the patient was discharged after 48 hours with aspirin and statin. At 2 years and 4 months, the patient remains asymptomatic with a negative treadmill test for provacable myocardial ischaemia.
Comments/Lessons
Coronary artery fistulas arise due to persistence of sinusoidal connections between the lumens of the primitive tubular heart that supply myocardial blood flow in the early embryologic period. Single fistulae are more common, ranging from 74 to 90%. Multiple fistulae are present in up to 16%, and fistulae originated from both coronaries in 5%. Most patients are asymptomatic, and fistulas are found incidentally, although some patients may present with symptoms e.g. dyspnoea, fatigue, palpitations, angina, or congestive cardiac failure in the sixth decade of life. Excellent results have been reported with surgery, but today catheter-based occlusions are also successful.
Gallery 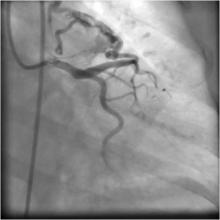 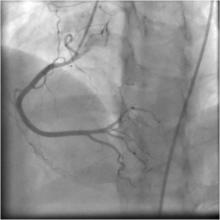 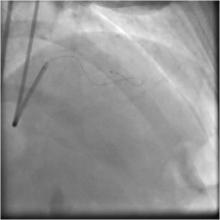 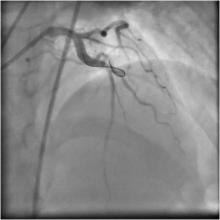 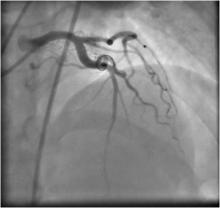 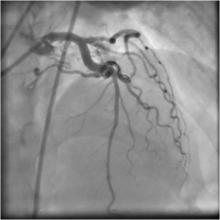 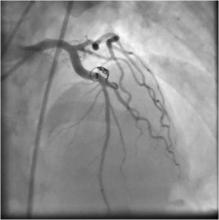