Repeat coronary angiography was performed; the choice and the orientation of the catheter were guided by the CT data. We used a 6Fr IMA Launcher (Medtronic) and a BMW guidewire (Abbot) to secure the catheter into the bypass graft. Coronary angiography confirmed severe in-stent restenosis of the LAD bypass proximal anastomosis (Figure 2).
Procedure
The BMW guidewire was positioned in the distal LAD saphenous vein graft. Two predilations were performed using a 2.5x15mm MAVERICK balloon (Boston Scientific) to 18atm. A 3.5x24mm TAXUS DES (Boston Scientific) was implanted at 15atm to treat the in-stent restenosis. The result was perfect with no angiographic residual stenosis and TIMI 3 flow (Figure 3, Figure 4).
Conclusion(s) / Result(s)
A new sixty-four slice CT was performed in 2011 and revealed an ideal stent position with aortic protrusion and no DES restenosis of the LAD bypass proximal anastomosis (Figure 5).

Comments/Lessons
In the case of restenosis and aortic stent protrusion, catheterization of the ostium of the saphenous vein graft may be challenging. CT may be a valuable tool to guide selective cannulation of the bypass graft. Moreover, the CT pulse acquisition and iterative reconstruction allow to obtain low dose and less artifacts due to stent.
Gallery 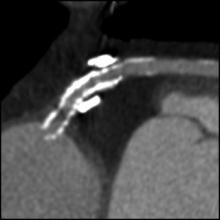 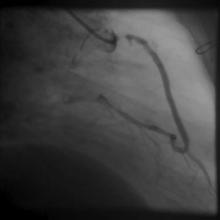 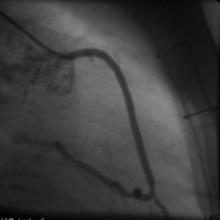 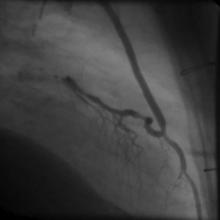 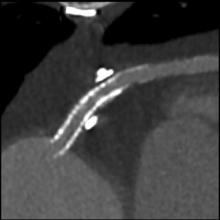