Grim to Glim: A LMCA Total Occlusion in NSTEMI

A.M. Thirugnanam
Operator(s)
A.M. Thirugnanam, MD., FSCAI, PhD. Sr. Interventional Cardiologist
Affiliation
Ipcard Cardiac Care Center, Hyderabad, India
Facility / Institute
Ipcard Cardiac care Center, Hyderabad, Andhra Pradesh, India
Clinical History
A 56 year old male with type II diabetes for 7 years and hypertension for 5 years presented with crescendo angina for more than 45 min. He had intermittent chest discomfort for the past 15 days, but did not see a physician. He was a non-smoker and did not use ethanol. He has epilepsy for 3 years, is a vegetarian, and is a school teacher by profession. At the time of admission his ECG (Figure 1), showed ST depression >2mm in V4-V6, ST elevation in aVR, and borderline changes in all other leads. LVEF measured 40-45%. TnI measured 56ng/dl, resting blood sugar measured 254mg/dl, and Creatinine measured 1.2mg/dl; HR was 136/min and BP was 80/100mmhg; and oxygen saturation was 93% in room air. Chest X-ray was clear. Angiography was performed via the radial route; during angiography the patient developed epilepsy and was given IV phenytoin.
Angiography
LMCA: proximal total occlusion (Figure 2), filling retrograde from RCA faintly (Figure 3).
RCA: dominant with mild disease in the mid and distal segments (Figure 4).
Procedure
A loading dose of clopidogrel 900mg, aspirin 325mg, and atorvastatin 80mg were given. Bolus and infusion of bivalirudin were given according to body weight. The LMCA was engaged with a JL 7Fr guiding using the right femoral approach. First a BMW guidewire was engaged with some difficulty into the LAD, and second BMW guidewire was positioned in the LCX. A 1.5x10mm Maverick balloon was used to predilate the entire LM to mid LAD (Figure 5) followed by a 2.0x10mm Maverick balloon. The patient developed mild hypotension (70/90mmHg); and dobutamine 10mcg and noradrenalin 5mcg were started. First a 2.5x33mm Xience Prime stent was deployed in the distal LAD (Figure 6), followed by a 2.75x33mm (Figure 7) and a 3.0x33mm (Figure 8) Xience Prime stent in the mid and proximal LAD and LMCA. The entire stented segments were overlapped and post-dilated accordingly (Figure 9). The final result was good and no residual thrombus or dissection was found (Figure 10).
Conclusion(s) / Result(s)
Bivalirudin infusion was continued for 12 hours, and ECG changes decreased significantly. The patient was discharged on the 5th day with appropriate medications.
Comments/Lessons
In high risk LMCA angioplasty, skill and meticulous planning are important. In this patient with crescendo angina and a highly elevated troponin and compromised LV function, the CT surgeon was reluctant to peform CABG.
Gallery 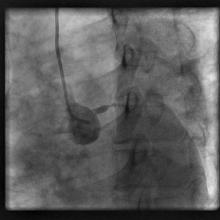 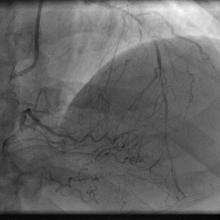 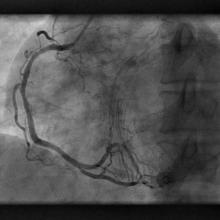 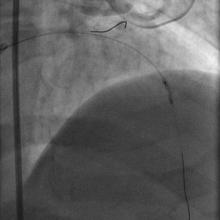 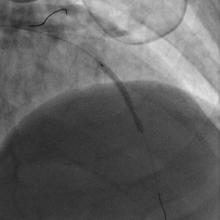 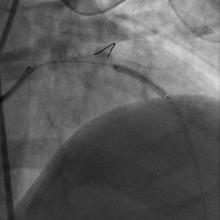 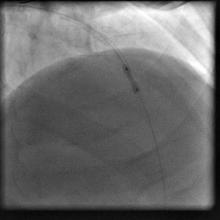 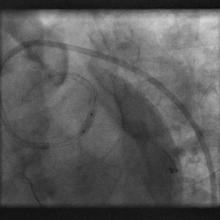 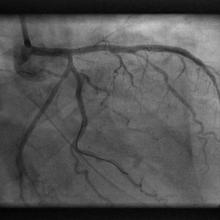