Multivessel Stenting in STEMI: Are Two Vessels to Blame?

Luis Cressa
Operator(s)
Luis Cressa
Affiliation
Centro Medico Docente la Trinidad, Caracas, Venezuela
Facility / Institute
Centro Medico Docente la Trinidad, Caracas, Venezuela
Clinical History
A 85 year old male with a history of hypertension and diabetes was admited with chest pain of 4 hours duration and dyspnea and orthopnea of 1 hour duration. He was Killip class III. The EKG showed ST elevation in II, III, and III; ST depression in V1-V5; and intermittent RBBB. Echocardiography revealed an akinetic inferior and posterior LV wall and a hypokinetic anteroseptal wall with an LVEF of 30%.
Angiography
1) LMCA: Short, non-calcified with no significant stenosis. (figure 1 and figure 2)
2) LAD: Large vessel with 95% stenosis followed by a long, irregular and eccentric 70 - 80% stenosis.
3) LCX: Proximal total occlusion
4) RCA: Non dominant vessel with mild disease (figure 3)
Procedure
The LMCA was engaged with an XB 3.5 6Fr guiding catheter through a right femoral approach (radial access was not possible). A Kinetix 0.014" guidewire was advanced through the proximal total occlusion in the LCX and placed in the distal OM. Thromboaspiration with a Diver catheter was performed (figure 4) after which a Tytan2 4.0x19mm stent was deployed at 16atm with an optimal angiographic result (figure 5). The patient continued to be class III-IV with a blood pressure of 80/50mmHg, a heart rate of 120bpm, and an oxugen saturation of 70% without any improvement with medical therapy. Another Kinetix 0.014" guidewire was placed into the distal LAD (figure 6), and a Promus Element 40x16mm stent was deployed in the proximal LAD without pre-dilation and with an optimal angiographic result. There was distal TIMI 3 flow in both arteries (figure 7) and significant clinical improvement of the patient. Procedure time was 35 minutes and 130 cc of Optiray were used.
Conclusion(s) / Result(s)
The patient was transfer to acute care unit for the next 24 hours and discharged 4 days after admission.
Comments/Lessons
Primary angioplasty is the therapy of choice for patients with ST-segment elevation myocardial infarction. However, STEMI patients with multivessel disease remain a major challenge. According to guidelines, only the culprit vessel should be treated. Multivessel intervention is related with worse outcomes. Despite that, each case has to be individualized. In this particular case the patient persisted with hemodynamic deterioration and instability after revascularization of the culprit vessel and multivessel angioplasty had to be considered as an option.
Gallery 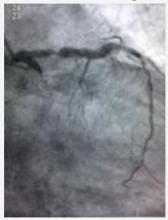 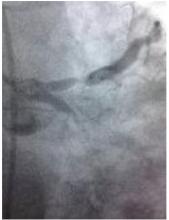 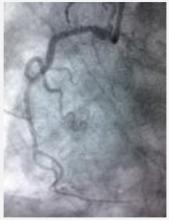 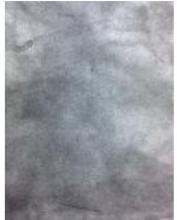 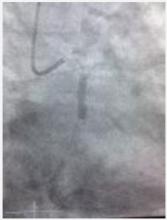 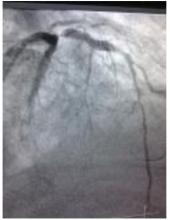 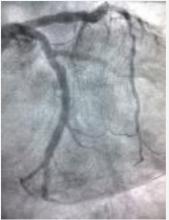