Occlusion of LAD and LCX Due to Thrombus in LMCA Aneurysm

Yoshihide Fujimoto
Operator(s)
Interventional Cardiology, Chiba University Graduate School of Medicine, Chiba, Japan
Affiliation
Interventional Cardiology, Chiba University Graduate School of Medicine, Chiba, Japan
Facility / Institute
Interventional Cardiology, Chiba University Graduate School of Medicine, Chiba, Japan
Clinical History
A 69 year old woman with no history of Kawasaki disease was admitted due to an acute MI.
Angiography
LM: L aneurysm (Figure 1)
LAD: Total occlusion at the origin
No significant stenosis in the LCX and RCA
Procedure
Guidewires such as BMW, Runthrough NS, SION, Athlete Eel Slender, and Whisper were tried to advance into the LAD, but without success. IVUS from the LCX to the LMCA was performed to find the ostium of the LAD; however, the aneurysm was too large to do it. The patient was transferred to the radiology unit to obtain precise coronary anatomy with 64-MSCT. It demonstrated that the LAD branched off from the opposite side of the residual lumen of the thrombosed aneurysm (Figure 2). Utilizing this information, it was possible to position the guidewire into the LAD (Figure 3). A 4.0×9mm Driver stent was deployed to cover the ostial LAD lesion. Coronary angiography showed a good result with TIMI 3 flow, although the aneurysm and a large amount of thrombus remained (Figure 4). 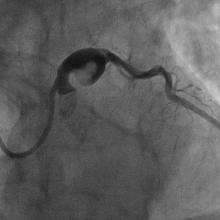 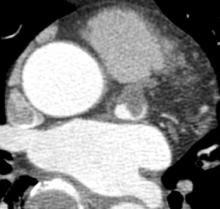 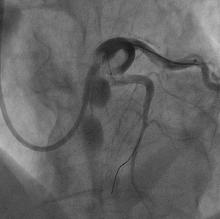 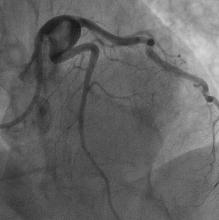 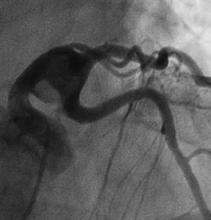 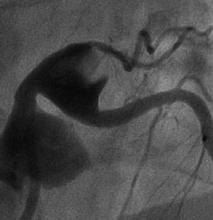 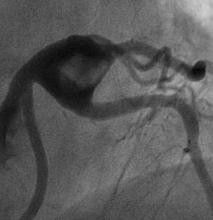 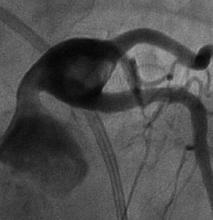