Khalid Amber
Affiliation
AL NAJAF CARDIAC CENTER
Facility / Institute
CARDILIOGY DEPARTMENT/AL NAJAF CARDIAC CENTER
Clinical History
A 25 year-old man was referred to our center as a case of uncontrolled hypertension due to coarctation of aorta. On clinical examination, the pulses in upper limbs were bounding, femoral pulses were absent, and blood pressure in the upper limbs was 180/100 with triple antihypertensive medications. ECG left ventricular hypertrophy, echocardiography findings in the suprasternal view showed coarctation of aorta just after the left subclavian artery.
Angiography
Angiography was performed via the right femoral access, but the guidewire could not cross the coarctation segment; therefore, right radial artery access was obtained and simultaneous antegrade and retrograde aortograms were done in the left anterior oblique view to analyze the relationship between proximal and distal segments of a possible interrupted aortic arch. The angiogram showed a 6mm interrupted segment (figure 1).
Procedure
The plan was to cross the interrupted segment retrograde. An Asahi Confianza Pro guidewire crossed into a false tract (figure 2, figure 3). Reshaping the guidewire by changing the angle of primary bend and length to find a true lumen and using multiple angiographic views, the guidewire finally crossed into the true lumen (figure 4). The true lumen was confirmed by passing a 1.8F microcatheter and injecting contrast through the total occlusion segment into aortic arch. A 4mm diameter coronary balloon was used to predilate the lesion(figure 5) ) followed by a guiding catheter contrast injection to assess if any dissection or perforation occurred (figure 6). A self-expandable (28mm diameter x 40mm length) non-covered stent (figure 7) was implanted in an attempt to avoid use or a covered stent since the occlusion waste near a large left subclavian artery. Afterwards balloon dilation was performed at 12mm and then 18mm diameters (figure 8, figure 9). Final angiography showed good angiographic results and zero pressure gradient with no dissection (figure 10).
Conclusion(s) / Result(s)
The patient was discharged the next day from hospital. On the 4th day his blood pressure was 130/85 on bisiprolol 5mg only. A CT angiogram done for possible missed dissection showed good result and no dissection (figure 11). After one month, the patient continued on the same medication with good controlled blood pressure.
Comments/Lessons
Percutaneous reconstruction of interrupted aortic arch can be done safely, especially if the team is expert in using chronic total occlusion coronary guidewires and the Cath Lab is equipped with covered stents for possible aortic dissection and rupture. The advantages of using coronary guidewires, which are relatively small, are that even if they pass into a false tract subintimal or even if they perforate it can be sealed spontaneously like in coronary chronic total occlusion cases. A 1.8F Microcatheter is also useful similar to treating chronic total occlusions.
Gallery 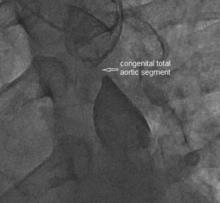 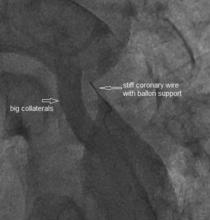 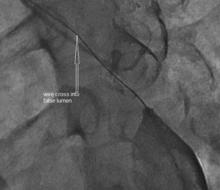 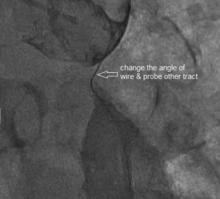 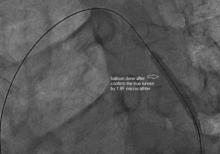 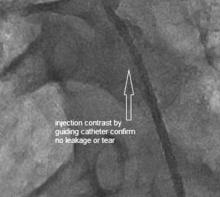 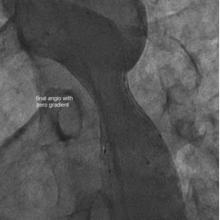