Sai Satish, MD
Operator(s)
Sai Satish, MD
Affiliation
Apollo Hospitals, Chennai, India
Facility / Institute
Apollo Hospitals, Chennai, India
Clinical History
A 72 year old male diabetic and hypertensive male, presented to our ER with an Acute Coronary Syndrome. In October 2016 this patient was rushed to the ER of another hospital with refractory VT. He was shocked repeatedly and got stents to both the proximal LAD and RCA as a bail out procedure. While this procedure stabilized him temporarily, his angina continued to worsen, and his LV function began to deteriorate. His LVEF was now 45% with significant hypokinesia of all the anterior segments with preserved muscle mass. The LV was not dilated and he had mild TR, mild PAH and MR.
Angiography
The subsequent angiogram showed a patent RCA stent and tight narrowing in the LAD stent (Figure 1). There was significant calcium in the proximal LAD around the stent which was significantly under-deployed focally with an ISR component contributing to the severe narrowing (Figure 2).
Procedure
The patient was counselled, and right femoral access was established with a 7F femoral sheath. The Left main was cannulated with a 7F XB 3.5 guide catheter and the lesion was crossed with a 0.014" workhorse PTCA guide wire. IVUS and OCT catheters did not cross the lesion (Figure 3). Pre-dilatation was attempted with a NC balloon (2.25x12mm) at 24 atms (Figure 4), with absolutely no effect. At this stage we decided to ablate the stent at the site of ISR to make way for further intervention. A Rota floppy wire was parked in the LAD and a 1.5mm burr was used at a speed of 180,000 RPM for short intervals, much shorter contact times than normal calcific lesion modification, keeping in mind the heat generated from this (Figure 5). After many short bursts for almost 4 mins, the burr punched through (Figure 6). This was followed by post dilatations with multiple NC balloons, two of which ruptured. Finally NC balloons (3.0x8mm & 3.0x9mm) at 24 atms for 15 seconds gave a fair result (Figure 7), (Figure 8). There was now a decent channel with TIMI 2 flow without any signs of dissection or any other complications (Figure 9). The lesion was then dilated with a scoring balloon (3.0x10mm) at 16 atms for 18 secs (Figure 10), ensuring good lesion bed preparation (Figure 11). A DES (3.0x18mm) was successfully deployed at 18 atms with prolonged inflation for 18 secs (Figure 12). The end result was excellent with no residual narrowing and TIMI 3 flow (Figure 13), (Figure 14), (Figure 15).
Conclusion(s) / Result(s)
At one year follow-up this patient is completely asymptomatic with normal LV function and a negative TMT.

Comments/Lessons
1. We have a series of 6 patients like this in whom we successfully ablated stents over the past 7 years. All of them tolerated the procedure well and improved significantly clinically.
2. Rotablation of stents, in experienced hands, is a safe alternative for getting optimal results in underexpanded stents in calcific lesions.
3. The possibility of thermal injury should be kept in mind while doing this, keeping the contact times as short as possible. 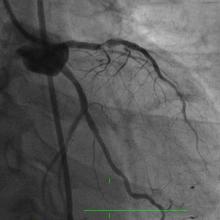 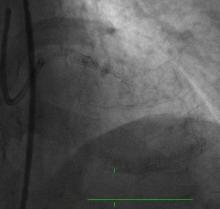 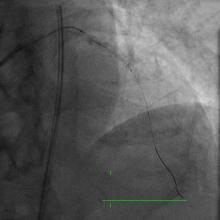 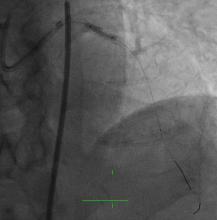 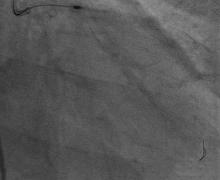 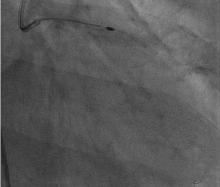 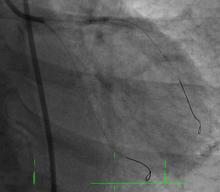 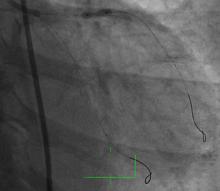 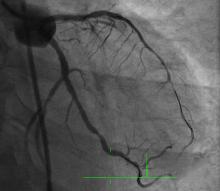 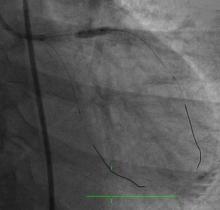 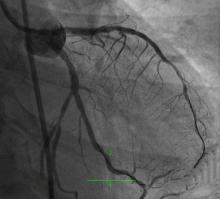 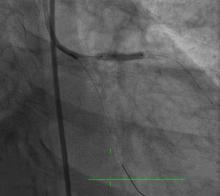 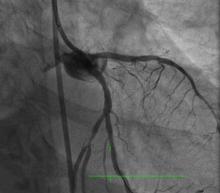 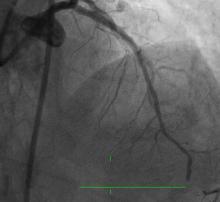 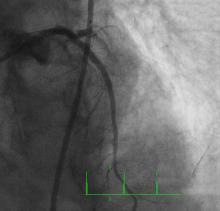 1 year ago
Stent ablation is one of the most riskiest procedures we do as interventionalists. I believe this is the case in even experienced hands. Provided you have the tools, LASER atherectomy together with IVL (shockwave) will help and reduce the need for stent ablation. We have several cases here in Bournemouth where we have performed stent ablation but currently we are getting favourable outcomes with LASER-SHOCK combo. Satnam Singh Interventional Fellow Bournemouth