Sandeep Banga
Operator(s)
Dr. Sandeep Banga
Dr. Mohan Nair
Affiliation
St. Stephens Hospital, New Delhi, India
Facility / Institute
St. Stephens Hospital, New Delhi, India
Clinical History
A 75 year old, non-diabetic and normotensive man presented with a history of chest pain with duration of 5 days. He had a history of breathlessness of NYHA Class IV with orthopnea. EKG showed QS in V1 to V3 and with 2mm ST elevation in V4 to V6, I, and aVl. He was diagnosed as acute extensive anterior wall myocardial infarction. It was decided to stabilize his acute left ventricular failure first and then take him for diagnostic coronary angiography, but he had reinfarction 36 hours later at which time EKG showed QS with J point elevation in V1 to V3 and with 4-5mm ST elevation in V4 to V6, I, and aVl. He was taken up for primary PCI. At this time, he was in acute left ventricular failure with spO2 of 80mmHg on 6 litres/min of O2 with BIPAP support. His HR=140/min and BP= 90mmHg on high inotropic support. Chest examination showed bilateral creptations. The cardiac surgeon refused to take him for surgery due to bad hemodynamics and reinfarction. Bedside echocardiogram revealed akinetic septum and apex with LVEF of 30%.
Angiography
1) Left main coronary artery: distal 90% stenosis (Figure 1, Figure 2, Figure 3) 2) LAD: thrombus containing mid 90% lesion after the large first diagonal (Figure 4) 3) LCX: small vessel with normal flow 4) RCA: total occlusion just beyond RV branch with retrograde filling (Figure 5)
Procedure
The LMCA was engaged with an EBU 3.5 6F guiding catheter. The LMCA and LAD were crossed using a 0.014” BMW guidewire. A second BMW gjuidewire was used to protect the large, first diagonal branchThe lesion in the mid LAD was predilated with a 2x10mm Sprinter balloon at 4atm. (Figure 6) The same balloon was used to predilate the LMCA at 4 atm. (Figure 7, Figure 8). It was decided to not to cover both the lesions with a single stent. A 3.5x18mm Endeavor stent was deployed at 12atm in the LMCA (Figure 9, Figure 10) at which time the patient had bradycardia followed by asystole that was treated with a temporary pacemaker and CPR. There was TIMI 2 flow in the LAD. The mid LAD was stented with a 3x18mm Endeavor stent at 12atm. (Figure11, Figure 12). The patient was on inotropic support throughout the procedure, but IABP support was not used. TIMI 3 flow was restored in the infarct related artery with immediate resolution of ST changes.
Conclusion(s) / Result(s)
Patient had clinical improvement of LV failure on BIPAP support associated with relief of chest pain and improvement of haemodynamics. He was discharged in stable condition after 5 days of hospitalization.

Comments/Lessons
The strategy of predilating the LAD first followed by stenting the LMCA in reverse sequence as well as the use of two stents instead of one helped us to minimize ischemia time and prevent no re-flow.
Gallery 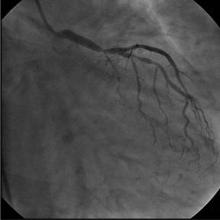 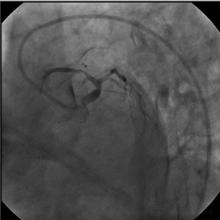 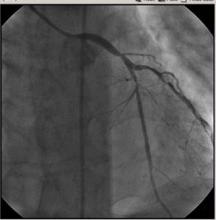 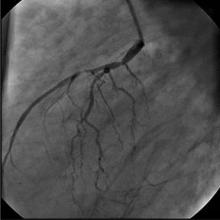 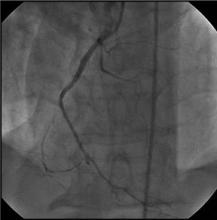 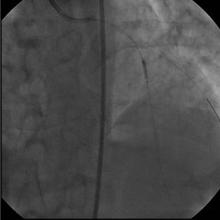 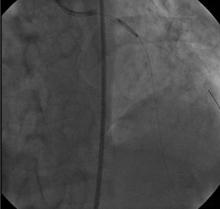 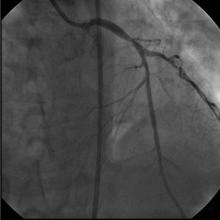 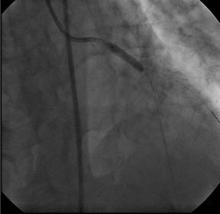 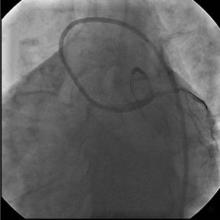 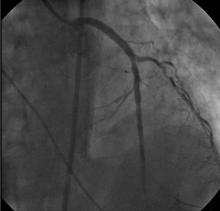