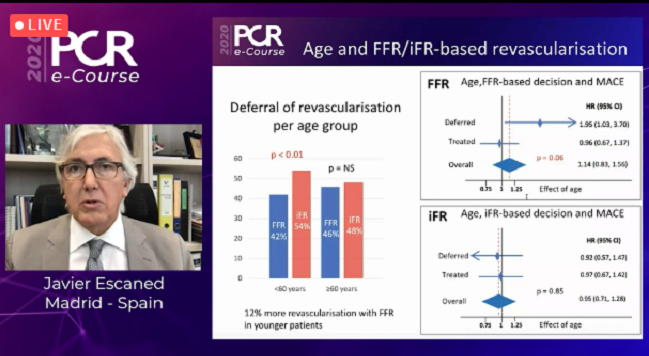 By 2 years, patients whose treatment of intermediate lesions was deferred based on functional testing have similar outcomes no matter whether this decision was informed by fractional flow reserve (FFR) or instantaneous wave-free ratio (iFR), researchers reported today during the PCR e-Course 2020. But a thought-provoking pattern emerged: iFR’s performance didn’t differ by patient age, whereas FFR’s did.

“Something is happening there. The data is very eloquent about this,” said Javier Escaned, MD, PhD (Hospital Clínico San Carlos Madrid, Spain), who presented the pooled findings from DEFINE-FLAIR and iFR-SWEDEHEART.

Back in 2017, another combined look at the two trials showed iFR was noninferior to FFR for 1-year MACE (death, nonfatal MI, and unplanned revascularization) when used to guide decision-making in intermediate lesions. Yet iFR also was linked to a greater proportion of patients deferring treatment as compared to FFR, which tilted towards more revascularization.

Their data set offers the chance to explore “different dimensions” of physiologic testing, in this instance age, he told TCTMD. “Why do you perform more interventions if you use FFR than iFR? This is something we already knew was happening. But why? And now we know that age is an [influential] factor.”

In younger patients, the difference between iFR and FFR is “huge” when it comes to how many are treated versus deferred, Escaned said. The reason for this is physiological: older versus younger patients respond differently to the hyperemia induced during FFR testing. iFR, by contrast, is measured at rest.

With age, the response to adenosine decreases steadily, so hyperemic flow is much higher in younger individuals than in the elderly people while baseline flow remains the same. Javier Escaned

Escaned and colleagues analyzed patient-level data on 2,130 DEFINE-FLAIR and SWEDEHEART patients whose physiologic testing had led to deferral of revascularization. Among all patients who underwent FFR in the two trials, 45% were deferred; for iFR, half were deferred.

Then the researchers divided the deferral group based on patient age at a cutoff of 60 years. For patients younger than 60, 42% were deferred with FFR and 54% with iFR (P < 0.01)—a 12% absolute difference in revascularization rate. For those 60 or older, the percentages were 46% and 48%, respectively (P = NS).

“With FFR,” said Escaned during the PCR virtual meeting, “age has a marked effect on 2-year outcomes only in those patients in whom revascularization was deferred,” where it was associated with a nearly doubling of MACE risk in younger versus older individuals (HR 1.95; 95% CI-1.03-3.70). “This did not apply to patients who were treated” based on FFR, he noted. With iFR, on the other hand, age had no effect on 2-year outcomes in either the deferred or treated groups.

Physiology, ISCHEMIA, and Beyond

To TCTMD, Escaned explained that the 60-year threshold was chosen because prior research has shown that microvascular function begins to change around that time. “With age, the response to adenosine decreases steadily, so hyperemic flow is much higher in younger individuals than in the elderly people while baseline flow remains the same,” he said.

What this opens up is the possibility that FFR might lead to overtreatment of ischemia that’s not clinically relevant in young patients as well as to underestimation of risk in elderly patients, he said. “This new evidence regarding age adds an additional layer of interest in the role of nonhyperemic indexes,” of which there are many: Pd/Pa as well as the proprietary iFR (Volcano), diastolic hyperemia-free ratio (DFR; Boston Scientific), resting full-cycle ratio (RFR; Abbott), and diastolic pressure ratio (dPR; Opsens).

“Is it possible perhaps that by circumventing this age-dependent variation in pharmacologic response, [we] will provide a more even assessment of stenosis severity in patients irrespective of age? This is something we have to really understand a little more,” Escaned said.

Questions of who should be treated and when are especially relevant in the post-ISCHEMIA era, with physicians “under more scrutiny,” he added. “Before we implant a stent, we’d like to double check that you can anticipate the hemodynamic impact of treating that particular patient.”

Particularly in these younger patients it’s important that we leave the door open to future therapeutic options by avoiding unnecessary intervention. Farrel Hellig

Farrel Hellig, MD (Sunninghill Hospital, Johannesburg, South Africa), in discussion following Escaned’s online presentation, agreed that it “highlights for us the importance of optimizing decision-making in the contemporary cath lab.” But given that the literature already shows FFR-based deferral is safe, he said, “you may ask, why do we need iFR?”

For one thing, iFR is easier to perform and may lead to greater uptake of functional testing, he pointed out. Moreover, the finding here that iFR leads to more deferral, especially in younger patients, suggests “a cost benefit without a penalty,” Hellig continued. “I think particularly in these younger patients it’s important that we leave the door open to future therapeutic options by avoiding unnecessary intervention.”

Also invoking ISCHEMIA and the message to “avoid unneeded intervention that may cause harm,” Hellig said it’s unfortunate that the trial’s design didn’t require physiological assessment. “We know that there’s an early PCI penalty of periprocedural events that was seen in ISCHEMIA, and this may well have been less with more deferral. And it strikes me that iFR is the ideal technology for such investigation.”

Antithrombotics After PFO Closure: Much to Discuss, Little Data to Inform

iFR Cheaper Than FFR Over Trajectory of 1 Year: DEFINE-FLAIR Analysis