Friends and colleagues remember a pioneering interventionalist, committed researcher, and lover of jazz.

(UPDATED) Anthony Gershlick, MBBS, a renowned clinician, researcher, and mentor died today from COVID-19 in the hospital where he worked for 30 years, the University of Leicester and University Hospitals of Leicester NHS Trust announced.

At the time of his death, Gershlick was a consultant cardiologist and professor of interventional cardiology. In a press release, the Leicester institutions said that he had been working in non-COVID environments and conducting much of his work virtually since April, taking on caseloads from other consultants to help during the pandemic. He “had been working tirelessly to provide continued care to cardiology patients.”

Nick Curzen, BM, PhD (University Hospital Southampton NHS Foundation Trust, England), president of the British Cardiovascular Intervention Society (BCIS), was a friend and colleague of Gershlick’s for 30 years. To TCTMD, he remembered him as a talented and pioneering interventional cardiologist with excellent judgement and decision-making who pursued excellence in both patient care and education.

“He trained scores of interventionists and contributed, often as organizer, to countless training courses and conferences. His teaching style was clear, forthright, witty, and absorbing,” Curzen said. As a researcher, he said Gershlick’s “hungry inquisitiveness” drove him to develop a large series of trials that addressed key clinical questions, and raise the funding to get the work done. Among the many trials Gershlick was involved in were EXCEL, REACT, CvLPRIT, and DAPT.

He will be sorely missed, whether it be planning a trial, arguing about some results, or drinking a beer. Nick Curzen

“It has been my great pleasure to be involved in some of these projects and to watch his ability to organize large groups of people firsthand,” Curzen added. “I am lucky to have known Tony as colleague, collaborator and friend. He will be sorely missed, whether it be planning a trial, arguing about some results, or drinking a beer.”

In 2017, Gershlick was awarded the inaugural BCIS lifetime achievement career award for outstanding contributions to the field of coronary intervention. At the time, he told the European Heart Journal that the support of his family, especially the “insightful intellect” of his sons David and Ben, gave him the encouragement he needed to do his work.

A Lifetime of Dedication and Supporting Others

Gershlick was born in Southend, England in 1951. His father was a delivery driver for a bakery, while his mother worked multiple jobs to put Tony and his sisters through school. Struggling with undiagnosed dyslexia, he described himself as a poor student in his early years. Nevertheless, he flourished in medical school and was an eager, young clinician at the time interventional cardiology was gaining a foothold in the 1980s. He quickly began training with some of the early British pioneers of PCI, including Raphael Balcon, MD, and Martin Rothman, MD.

Mamas Mamas, BMBCh, DPhil (Keele University, Stoke-on-Trent, England), told TCTMD that his overarching memory of Gershlick was as a fantastic human being with a sharp mind, who always made time for and supported the next generation of junior interventional cardiologists.

“As a very junior research fellow, he came and sat next to me during a course dinner and spent the evening giving me sage advice about crafting a research career, and gave me his contact details if I ever needed his support/advice,” he said in an email. “We spoke at most meetings, and he was always approachable and someone that you could always ask for advice.”

Gregg Stone, MD (Icahn School of Medicine at Mount Sinai, New York, NY), a close friend of Gershlick’s for many years, told TCTMD he was devastated by the news of his death. “He was a caring physician, dedicated interventionalist, great scientist, loved jazz and all people, had a cheeky sense of humor, and brought a smile to those in every encounter. He will be greatly missed and never forgotten,” he said.

Like others, ﻿C. Michael Gibson, MD (Baim Institute for Clinical Research, Boston, MA), touched on how recently he'd been in touch, making today's news so hard. "We had a great conversation a couple of weeks ago," he said in an email to TCTMD. "We discovered that we both collect the work of the jazz photographer Herman Leonard and Tony talked about his love of playing saxophone. He led a rich life both inside and outside of medicine. I will miss him and his humor."

David Kandzari, MD (Piedmont Heart Institute, Atlanta, GA), called Gershlick “a champion not for interventional cardiology alone but for cardiovascular medicine as a whole, and he was a champion therefore for best patient care.”

Kandzari praised Gershlick’s eagerness to challenge and question results. “He might have been mistaken by some as confrontational, but instead he was always seeking to learn what is in the best interests of patient care or instead be a devil's advocate to learn a new perspective. There is never a time I would see Tony at meetings not surrounded by friends and colleagues,” Kandzari continued. “He reminds me now that we are always learning in medicine and will never have all the answers. I admired him greatly and will miss him.” 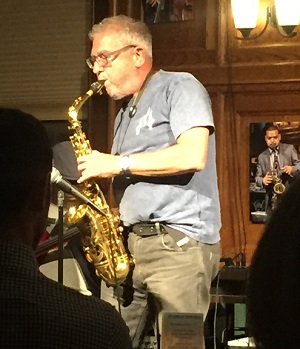 “After he left NHS and before starting his position at Leicester, Tony spent one month in DC practicing his saxophone,” recalled Gary Mintz, MD (Cardiovascular Research Foundation, New York, NY). “On October 4, 2017, we went to the venue pictured in the photo—the second floor of Mr Henry’s in Washington DC—where there is an open-mike jazz jam every Wednesday evening, organized by the Capitol Hill Jazz Foundation. I took this photo of Tony playing his sax, but I don’t remember the tune. It is my fondest memory of a good friend.”

As news spread of Gershlick’s death on Friday, many took to Twitter to share professional and personal remembrances.

So sad. Tony was a legend. I very much enjoyed talking with him whenever we saw each other. RIP. https://t.co/G7GsyGeRYo

A great man. Spent TCT night in a San Diego jazz bar with him & marvelled at how he ended up chatting to everyone in the bar by the end of the night. Great people get things done. His list of achievements is endless. A nice guy and a top clinician until the end. Devastating. RIP

I have no words. I loved Tony. He was brilliant, always right on, determined, and dedicated. His commentaries priceless. 😢😢😞😞He will be sorely missed. RIP dear Tony 🙏

Tragic news - a pioneer of PCI, acclaimed academic, brilliant teacher & most of all incredibly approachable & great fun socially. Condolences to his family - we will hang onto our fond memories of him & many of us will shed 😪 on this sad day

Deepest condolences to his family and friends. He worked incredibly hard to get @EUROSHOCKstudy up and running. Rest in peace Professor. pic.twitter.com/YLXMiDk59L

Just stunned. Dreadful, dark day for UK interventional cardiology & research to lose one of its father figures. My sincere condolences to his family. We will miss you, Tony. Rest in peace, dear friend.

The University of Leicester and University Hospitals of Leicester NHS Trust have planned a minute of silence in memory of Gershlick that will take place on Monday, November 23, 2020, at 11 AM GMT.