The ATTRACT trial failed to meet its primary endpoint, but there may remain a role for the approach in some patients. 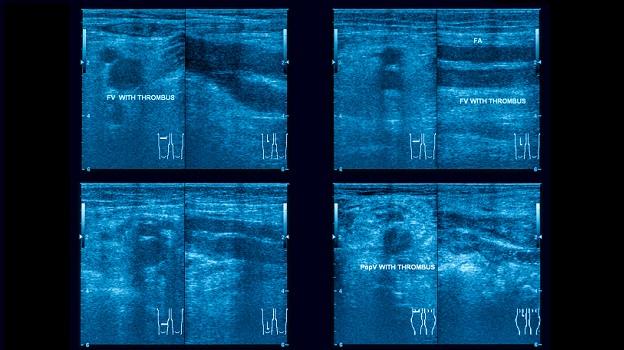 Performing pharmacomechanical catheter-directed thrombolysis on top of standard anticoagulation therapy does not reduce postthrombotic syndrome in patients with acute proximal deep vein thrombosis (DVT), the ATTRACT trial shows, although it remains to be seen whether the strategy could have a role in select subsets.

Postthrombotic syndrome occurred at 6 to 24 months of follow-up in 47% of the intervention group and 48% of those who received anticoagulation alone (risk ratio 0.96; 95% CI 0.82-1.11), with similar results in a per-protocol analysis, Suresh Vedantham, MD (Washington University in St. Louis, MO), and colleagues report in the December 7, 2017, issue of the New England Journal of Medicine. Results from the trial were previously reported in March at the Society of Interventional Radiology meeting.

The lack of benefit with pharmacomechanical thrombolysis was accompanied by a higher rate of major bleeding within the first 10 days, which narrowly met statistical significance (1.7% vs 0.3%; P = 0.049).

Vedantham told TCTMD the results shift the debate around how extensively invasive measures should be used in patients with DVT. “In terms of using these treatments routinely along with first-line treatment for DVT, I think that the study showed that it’s really not justified given what we know about the risks of these clot-busting drugs,” he said, noting that such strategies are costly as well.

The results will likely result in a pullback from using approaches like the one evaluated in ATTRACT, especially because patients with DVT typically are referred through noninterventionalists, who initially were more skeptical about the treatments to begin with, Vedantham noted.

Roughly half of patients with proximal DVT will develop postthrombotic syndrome—which is characterized by chronic limb pain and swelling and can lead to major disability, leg ulcers, and poor quality of life—in the 2 years following initiation of anticoagulation therapy, according to the authors.

Small trials, such as CaVenT, have shown that removing the acute thrombus with catheter-directed thrombolysis may help avert postthrombotic syndrome. Vedantham said that in recent years, invasive treatments have become more common, getting deployed in more than just the most severe cases.

The phase III ATTRACT trial, which was designed to address the controversy about how frequently these catheter-based therapies should be used, evaluated the more intense method of pharmacomechanical catheter-directed thrombolysis, involving both delivering a fibrinolytic drug into the thrombus and disrupting the clot using aspiration or maceration.

At 56 US centers, investigators randomized 692 patients with symptomatic, acute proximal DVT involving the femoral, common femoral, or iliac vein to anticoagulation alone or anticoagulation plus pharmacomechanical thrombolysis. Stenting was an option in the intervention group, and all patients were offered compression stockings.

Although the addition of pharmacomechanical thrombolysis did not reduce overall postthrombotic syndrome, there were some hints that the technique could be useful in certain patients.

Postthrombotic syndrome rated as moderate-to-severe was less likely to occur following the intervention (18% vs 24%), although that difference was not statistically significant after taking into account multiple testing.

Who Benefits, Who Doesn’t

Commenting for TCTMD, Ido Weinberg, MD (Massachusetts General Hospital, Boston, MA), acknowledged that the trial was negative based on the primary endpoint results, but added, “I think everybody who’s in the field understands and agrees that there’s more to this.”

Weinberg, who is medical director of VasCore, the vascular ultrasound core laboratory for the trial, said future analyses of the ATTRACT data should provide insight into which patients will benefit from the intervention.

“Maybe the primary endpoint was negative, but I believe that with appropriate patient selection, this procedure still has a future,” he said. “And we shouldn’t forget the acute symptom relief, which is not something this study was looking at. So it definitely has a place there, but I also feel it has a place for the long-term prevention of severe [postthrombotic syndrome].”

Vedantham agreed that there may still be a role for pharmacomechanical thrombolysis in certain groups.

“Most patients now don’t need to undergo an unnecessary procedure and be exposed to those risks and costs,” he said. “But I think there’s certainly an opportunity here to really pin down the population and then do additional studies to really define who should benefit from this type of treatment.”

The trial demonstrated that postthrombotic syndrome remains a frequent problem in patients treated for DVT, Weinberg noted, adding, “What it teaches me is that there’s more to preventing postthrombotic symptoms than intervening on the vein.”

The question then, he said, is what needs to be added to anticoagulation to make a dent. It’s possible that combining techniques for opening the vein with a treatment to address inflammation and potentially something else might help reduce this problem, Weinberg said.

But it also could be that selection is critical, he added, saying that patients who are most likely to have severe postthrombotic symptoms might be the best population in which to use pharmacomechanical thrombolysis. The problem is that clinicians don’t have a way to isolate those patients just yet.

Additional analyses from ATTRACT should start to help in that process, Weinberg said. For example, he said, it would be useful to compare the outcomes of patients with iliofemoral DVT with the rest of the cohort, to take a deeper look at outcomes in patients who did or did not continue taking anticoagulation during follow-up, and to examine proof of patency using ultrasound data.

“I still believe—and I definitely think that this publication supports this belief—that there is utility for catheter-based intervention for proximal DVT to prevent [postthrombotic syndrome],” Weinberg said. “But I think that once we get the further parsing of the data then we’ll probably need to avoid the procedure in some patients and stick to a more narrow group of patients. I just don’t think that we know exactly how to do that just reading this publication.”

What Does ATTRACT Mean for Catheter-Directed Thrombolysis for DVT?