The institutional learning curve was evident up until 50 cases, but improvements were observed up to 200 procedures. 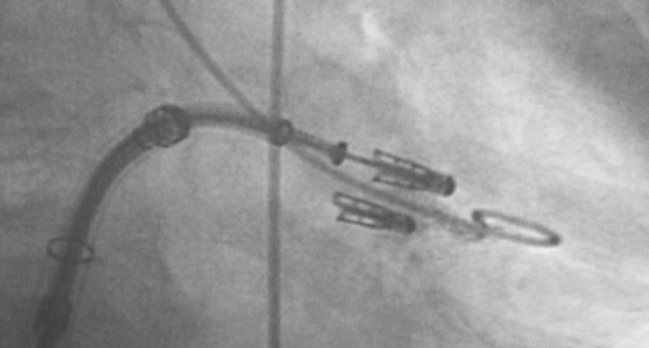 Hospitals that perform a larger number of transcatheter mitral valve repairs (TMVRs) with the MitraClip (Abbott) have significantly better procedural success, as well as shorter procedural times and fewer complications, when compared with less experienced clinical centers, according to a new analysis.

The observed relationship between institutional volume and clinical outcomes was evident up until 50 cases, at which time an “inflection point” was seen. However, procedural success, procedural duration, and complication rates continued to improve up to 200 cases, researchers say.

The link between volume and outcomes has been debated over the last 12 months for transcatheter aortic valve procedures, but was bound to become a talking point in the mitral space, particularly in the wake of a US Food and Drug Administration decision to expand the indication for MitraClip to include functional mitral regurgitation (MR). This announcement, based on the positive results of the COAPT trial, is expected to vastly expand the number of patients eligible for the procedure.

Adnan Chhatriwalla, MD (Saint Luke’s Mid America Heart Institute, Kansas City, MO), lead investigator is this new analysis, said that as a site builds clinical experience, it becomes significantly better at reducing residual MR. This may reflect the acquisition of technical skills necessary to achieve ideal clip placement and/or device positioning or operators becoming more aggressive in reducing residual MR with the addition of a second MitraClip. Speaking to the latter theory, however, Chhatriwalla noted that procedural times declined with experience, which wouldn’t be expected if operators were using more devices to achieve ≤ 1+ MR.

“In some early cases, just getting the clip on and reducing the MR from severe to moderate was a success,” he told TCTMD. “Now it may be, that’s good, but can we do a little better? What if we move it a little this way or that way, rotate it a little this way or that way, can we get the MR to look a little better? Is a second clip needed? Having done these myself, and having experienced the learning curve myself, it’s very different than TAVR.”

Paul Fiorilli, MD (Penn Medicine, Philadelphia, PA), an interventional cardiologist who was not involved in the study, said the MitraClip procedure is complex, requiring a detailed understanding of patient selection based on transesophageal imaging. The procedure itself requires a transseptal puncture followed by implantation of one or more clips guided by transesophageal echocardiography. “This is a complex, carefully-planned-out procedure with many steps,” Fiorilli told TCTMD. “As operators get more experience with [the steps], I would expect they would get more comfortable and the outcomes get better.”

Chad Kliger, MD (Northwell Health, New York, NY), who was also not involved in the study, said the analysis will spark debate about the appropriate volume of procedures necessary to maintain a TMVR program. For him, a dedicated heart team, one that includes a cardiologist, surgeon, echocardiographer, and structural interventionalist, working together to provide the service is critical to achieving the best results.

“There will be a debate about the right number,” he told TCTMD. “I think it’s based on outcomes. For those programs that exist now with that team, it will be maintaining good outcomes for patients. For new programs, it will involve the individuals with expertise working together to create that optimal result.”

The new study, which was published online ahead of the July 22, 2019, issue of JACC: Cardiovascular Interventions, is an analysis from the Society of Thoracic Surgeons/American College of Cardiology TVT Registry of 12,334 MitraClip procedures performed at 275 sites between November 2013 and September 2017. The vast majority of patients had 3+ or 4+ MR and 86.5% had degenerative mitral valve disease. The median STS Predicted Risk of Mortality score was 5.9% for valve repair and 8.3% for valve replacement. The median number of cases performed per site was 30.

Optimal procedural success, which was defined as ≤ 1+ MR without mortality or the need for cardiac surgery, was 62.0% in hospitals where one to 18 MitraClip procedures were performed, 65.5% at centers in which 19 to 51 cases were completed, and 72.5% in hospitals where 52 to 482 MitraClip procedures were performed (P < 0.001). Procedural complications were less frequent with increasing site volume (13.6%, 12.0%, and 11.5% among the tertiles, respectively; P = 0.013); a similar trend was seen for blood transfusions. Single-leaflet device attachments were also less frequent among sites that performed 52 to 482 MitraClip procedures. Stroke and mortality rates were not significantly different among the low-, mid-, and higher-volume centers.

Having done these myself, and having experienced the learning curve myself, it’s very different than TAVR. Adnan Chhatriwalla

The researchers defined optimal procedural success as ≤ 1+ residual MR as opposed to the commonly used definition of an “acceptable” result (≤ 2+ residual MR). The reason, said Chhatriwalla, is that data from the TVT Registry has shown that less residual MR following TMVR is associated with less mortality and fewer heart failure hospitalizations in patients with degenerative MR. Still, the researchers observed a significant volume-outcome relationship when using the acceptable definition, although the differences were smaller between the tertiles.

In the learning-curve analysis, there was an association between case experience and procedural success, duration, and complications until 50 cases, with a continued improvement observed up to 200 cases in the unadjusted analysis. In the multivariate analysis, only the association between case experience and procedural time remained statistically significant, a finding that speaks to the importance of case selection for improved outcomes with greater experience.

Despite evidence of the learning curve, Kliger pointed out that even among centers that handled the fewest cases—those where just one to 18 MitraClip procedures were performed—there was no increased risk of death or stroke. “The results are reasonable, and the complication rate is very low,” he said. The difference in the complication rate between those that performed the most versus those that performed the fewest MitraClip procedures was mainly driven by bleeding and single-leaflet attachment, he said. High-volume centers used more clips than lower-volume hospitals, which led to better leak reduction, but that aggressiveness is the result of increased experience.

“It goes to the heart team model that shows these cases being selected and discussed and appropriately treated at any number the center happens to do,” said Kliger. “Even at the lowest tertile, the results are good, and they get better at higher volumes.”

To TCTMD, Chhatriwalla stressed that investigators are not making the case for TMVR to be performed only at high-volume hospitals.

“Not everybody needs to be a high-volume center, but maybe there is a cadence needed to get to a spot on the learning curve within a reasonable amount of time,” said Chhatriwalla. “It’s a slippery slope. If you say that only high-volume centers should do procedures, then why should anybody start a new MitraClip program? They will be at the bottom of the learning curve. We’re going to need more centers, and they’ll need to do the MitraClip procedure, but I think if we have a goal, say, if you’re doing two cases per month, and you can get to 50 cases in 2 years, that’s a pretty good cadence.”

If a hospital is performing just a few cases a year, and it will take a decade before accruing 50 procedures, then it doesn’t make sense for them to start a MitraClip program, he noted.

Fiorilli agreed that performing two cases per month, enough to accrue at least 50 procedures in the first couple of years, is reasonable to “get a real good rhythm with the device and to understand patient anatomy.” Each case differs with respect to mitral valve pathology, and how each patient reacts to each move with the device is not likely to be seen in the first 25 or so cases. “It’s going to take longer to gain that experience.”

Even at the lowest tertile, the results are good and they get better at higher volumes. Chad Kliger

The new TVT Registry data, said Fiorilli, do suggest that TMVR with MitraClip should be performed at centers that “have a fair amount of experience.” Given the potential problems with patient access, Fiorilli suggested a focus on systems of care that can facilitate treatment at larger centers of excellence. He stressed that patient selection for the procedure will be particularly important particularly as MitraClip is used, more and more, in patients with secondary MR. The conflicting results from COAPT and the neutral MITRA-FR trial, both in functional MR, have been attributed, in part, to differences in patient selection and background medical therapy.

Chhatriwalla also stressed the importance of appropriate case selection and an honest appraisal of technical expertise. For example, one of his center’s referring hospitals recently started its own MitraClip program, but had a case that was not deemed appropriate based on its own early experience. That hospital referred the patient back to Saint Luke’s Mid America Heart Institute for an evaluation, with the possibility of having the procedure done there instead.

“That’s the type of discussion that you want,” said Chhatriwalla. “Not that you shouldn’t do MitraClip, but to understand where you are on the learning curve. As you start, you need to be careful in case selection, and in the more complex cases, it may be better for the more experienced site to handle the case initially. As you build experience, then you can do it.”

In an editorial, Gregg Stone, MD (Columbia University Irving Medical Center, New York, NY), said the present study confirms the obvious, “that the success, effectiveness, and safety of TMVR, like all procedures and cognitive exercises in medicine, will improve with increasing center and operator ‘practice.’” He suggests that 50 procedures per year is the “bare minimum” needed until MitraClip outcomes start improving, noting that progress continues to be made well beyond this threshold.

“‘More is better,’ and no doubt we all would want our patients and family members to be evaluated and (if appropriate) treated at a high-volume center by a knowledgeable, skilled, and highly experienced heart team consisting of cardiologists, echocardiographers, interventionalists, and surgeons specializing in heart failure and mitral valve disease,” writes Stone. He added that low-volume operators and heart teams are also less likely to attempt treatment of a high-risk or complex patient, which is appropriate, but these are the patients who stand to benefit the most from a successful TMVR.