Driven to inspire her young daughter, this interventional fellow enjoys balancing procedural skill and empathy in her day-to-day. 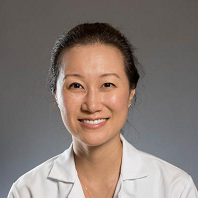 Christine Chung, MD, is an interventional cardiology fellow at NewYork-Presbyterian/Columbia University Irving Medical Center (New York, NY). She was educated at Drexel University College of Medicine (Philadelphia, PA), and completed her internal medicine residency at Brigham and Women’s Hospital (Boston, MA). From there, Chung moved to New York for her cardiology fellowship, and plans to stay at Columbia for an additional year to train in structural heart interventions. She has co-authored more than half a dozen articles in peer-reviewed journals and has presented research around the country. After training, Chung hopes to have a career in academic medicine that allows her to balance clinical and research work with teaching the next generation of cardiologists.

Tell us about yourself and how you’ve gotten to this point in your career.

I did not always intend to be a doctor; I don't come from a family with anyone in medicine. But when I was coming through middle and high school, I had a predilection for biology. Although I didn't like all the sciences, I really liked biology and learning about the different physiologic systems. I was always drawn to cardiology because I feel like of the different organ systems, the heart is the most intuitive. When I first entered college, I was a double major in political science and biology, but I resisted the idea of going into medicine. Perhaps this was my rebellion as a child of first-generation Asian immigrants who had always suggested that medicine might be a good career choice. As I went along, however, the rigors of trying to maintain a premed course load won over and I ended up just focusing on biology and dropping the political science. It wasn’t until later in college that I finally made the commitment to go into medicine, and after I graduated I spent a year doing basic science research at the National Institutes of Health in Bethesda, MD, and then entered medical school after that.

Once I made the decision to go into internal medicine, I wanted to maintain an open mind, but cardiology kept pulling at me. When I first started my general cardiology training, I actually thought I wanted to specialize in heart failure, but I had always liked procedures. What initially prompted my serious consideration of interventional as a career choice was a discussion I had with one of my faculty mentors. My concern was that being an interventionalist, I would be primarily a proceduralist and not necessarily a clinical doctor. My passion has always been to be a “traditional doctor”—having the time to sit with people, make diagnoses, and then carry them through in a longitudinal relationship—and he reminded me that while as a fellow you are in the lab all the time focusing on developing these procedural skills, once you are out it's very much more of a well-rounded practice where you are definitely seeing and following your own patients. That gave me a more realistic perspective of what a career as an interventionalist could be and that it could enable me to have a multifaceted career and is not just a technical and procedural subspecialty.

Looking back, what would you say has been your most meaningful clinical experience so far?

I think one of the most impactful experiences that I've had this year, specifically, was very early on in the year when I had a complication during a case. It was an LAD PCI and we were doing atherectomy, and during the procedure the patient developed a perforation. While she initially seemed to be doing okay, she became hypotensive and went into tamponade. It became a really critical situation and there was mass mobilization of resources in the cath lab, and we tried to drain the pericardium and were having trouble doing so because at that point the patient was undergoing chest compressions. We ended up having our CT surgery colleagues come into the lab, and they ultimately ended up doing an emergency sternotomy on the table. After stabilizing her, they took her to the OR and repaired everything. Amazingly after going through that type of experience, she survived and was able—after a very prolonged hospitalization—to leave the hospital and go to rehab. That just really embodied for me the importance of having a multidisciplinary team that works together, and I really appreciate the collaborative environment and relationships that we have here with our CT surgery colleagues. It really made the difference in that case.

This case was actually an elective PCI, which I think made it all the more devastating when it happened. You of course don't want to have complications ever, but when it's in a stable outpatient that comes in for an elective procedure, it's even more devastating. So I think one of the humbling aspects of our field is that even the most seemingly routine cases are never completely benign, and it's just a reminder to stay humble and stay focused and just always be alert to the possibility that things can go awry.

Who has had the biggest impact on your cardiology career and why?

I've been really fortunate in my time here at Columbia to have had support from a lot of different people. People often say that mentorship doesn't come down to just one individual; usually you require a team of people to support you at different stages throughout your development. That's definitely been true for me. When I was making certain critical decisions along the way, I found some of the most junior people to be very helpful I think because they had recently struggled with the same decisions and it was probably still very fresh for them. At other junctures, it's been very helpful to have more senior mentors who knew the lay of the land and who understood the bigger picture. There have been people at different stages that have been able to provide different types of insight and perspective.

What advice would you give to an up and coming interventional cardiologist?

It's important to remember that ultimately being a good interventional cardiologist centers on being a good doctor. What that means to me is it's not just about the procedure and doing an excellent job while you're in the room with the patient, but it's about meeting them beforehand, taking the time to answer any questions and not leaving any anxieties, talking them through key parts of the procedure, and then talking to them and answering any questions at the end. If there are complications, it’s about being there at the bedside to assist in their ongoing management. I think all of those things really make somebody an overall good physician and not just a proceduralist.

What has it been like for you to grow your career in still such a male-dominated field?

I intentionally chose, as a woman, to enter a very male-dominated field. I really want to encourage other women who are considering interventional cardiology as a career choice to pursue their passion. Training is a season of my life in which I am fully dedicated to mastering a large set of basic technical skills, so practically, that means I'm not home much and I see very little of my 2-year-old daughter during the week. It's tough but I have an extremely supportive spouse, so we make it work and I know there will be other seasons in life. I think it's important for my daughter to see that her mom is doing something she loves, and it's something that inspires me to keep pushing myself.

If you weren't a physician, what else could you see yourself doing?

One of the fields that I most could see myself going into outside from medicine would be education. I think one of the things that I sort of carried in the back of my mind when I first started this journey of entering medicine, and especially when I was a medical student, was that I really appreciated that so much of medicine is being a teacher and that at every stage of training there is somebody coming through the process behind you that can benefit from your teaching. So, in many ways I'm able to incorporate the things that I love about teaching into my career as a doctor.

Christine is a fantastic interventional fellow—someone who has successfully managed to do outstanding work in the cath lab while maintaining her academic productivity at the same time! She also has a very interesting family dynamic with a sister who is a surgeon and wants to go into CT surgery; I secretly think Christine is training to do everything her sister can (but percutaneously).