Clopidogrel Should Remain Antiplatelet of Choice in Elective PCI: ALPHEUS

There was no reduction in ischemic events with ticagrelor, but its use did come with an increased cost of more nuisance bleeding. 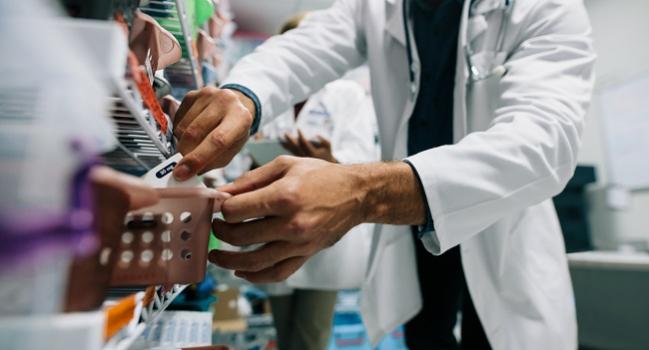 Patients with high-risk features undergoing elective PCI and treated with the more-potent antiplatelet agent ticagrelor (Brilinta; AstraZeneca) instead of clopidogrel fared no better with respect to protection from periprocedural myocardial infarction or major myocardial injury, according to the results of the ALPHEUS study.

And while use of ticagrelor in the elective setting wasn’t associated with an increase in major bleeding, there was more minor or nuisance bleeding when compared with those who received clopidogrel. For this reason, investigators say their results support the continued use of clopidogrel as the standard of care for elective PCI.

“We were surprised by the results of the trial,” Silvain said. “It does not confirm the thrombotic mechanism.” Silvain said researchers plan to study the angiograms collected by the core laboratory in the hopes of identifying the underlying mechanism for the resulting myocardial infarction and injury.

Stephen Wiviott, MD (Brigham and Women’s Hospital, Boston, MA), who commented on the study during the morning press conference, said that more-intensive antiplatelet therapy can generally be expected to reduce platelet-mediated thrombotic events, such as MI and stent thrombosis, as studied in ALPHEUS, and to increase the risk of bleeding. In the setting of PCI for stable CAD, however, clopidogrel is the preferred agent and should remain so after ALPHEUS, he argued.

“There was no evidence of ischemic benefit regardless of the specific endpoint that was chosen,” said Wiviott. “As we put this all together, I would conclude that this trial does not support the use of a more-potent P2Y12 antagonist for elective PCI given that there was no ischemic benefit and a tendency toward more risk with bleeding. Based on these results, and consistent with similar trials, aspirin and clopidogrel should remain the standard of care in this population.”

This trial does not support the use of a more-potent P2Y12 antagonist for elective PCI. Stephen Wiviott

For patients with NSTE ACS undergoing PCI, ticagrelor, prasugrel, and clopidogrel all have a class I recommendation for use in the US and European guidelines, with the American College of Cardiology/American Heart Association (ACC/AHA) also stating that it is reasonable to give preference to ticagrelor and prasugrel over clopidogrel. In elective PCI for stable CAD, however, clopidogrel has a class I indication from both the ACC/AHA and European Society of Cardiology. The US guidelines offer no recommendations on the use of ticagrelor or prasugrel in elective PCI, while the European guidelines state there is a divergence of opinion on its use in this setting.

The ALPHEUS trial, presented during the late-breaking clinical trials session and published simultaneously in the Lancet, was conducted at 49 hospitals, the vast majority in France. The trial included 1,910 patients randomly assigned to ticagrelor or clopidogrel. Patients were included if they had normal cardiac troponin levels (or decreasing levels if troponin was mildly elevated) and at least one high-risk characteristic, among them the presence of complex lesions, multivessel disease, or longer stent lengths. Diabetes, another high-risk patient characteristic, was present in more than one-third of patients.

“There was a consistency in all components of the primary outcome,” said Silvain. When investigators employed the 4th Universal Definition of MI, which emerged on the scene during the course of the study, periprocedural event rates were significantly higher but similar in the ticagrelor- and clopidogrel-treated patients.

With respect to safety, there was no difference in rates of bleeding classified as major (BARC type 3 or 5) or nuisance or minor (BARC 1 or 2), or of any bleeding (BARC 1 to 5), at 48 hours. At 30 days, there remained no difference in the risk of major bleeding, but the rate of nuisance or minor bleeding was 11% in the ticagrelor arm and 8% with clopidogrel (P = 0.007). Rates of dyspnea were also higher with ticagrelor.

ALPHEUS is really important data. I think the data does really make you pause. Dipti Itchhaporia

In pooling the ALPHEUS results with SASSICAIA, a study published earlier this year testing intensified antiplatelet therapy with prasugrel before elective PCI, researchers showed there was no difference in the risk of death, any MI, or stent thrombosis, among other endpoints, with ticagrelor or prasugrel compared with clopidogrel.

Dipti Itchhaporia, MD (Hoag Memorial Hospital Presbyterian, Newport Beach, CA), said the trial should make interventional cardiologists think, particularly since many have grown more comfortable over the years using ticagrelor and prasugrel for patients with ACS and even in stable CAD patients with high-risk, complex anatomy. In one review, almost one-third of patients without ACS undergoing PCI between 2009 to 2016 were treated with prasugrel or ticagrelor, she said.

For that reason, “ALPHEUS is a really important data,” she told TCTMD. “I think the data does really make you pause and ask if [more potent antiplatelet therapy] is really necessary because it is more expensive, although prasugrel is generic so that’s not as big an issue, but if you’re using ticagrelor, [cost] is an issue.”

For Itchhaporia, there is still a need for more research in this area. For example, while the patients in ALPHEUS were classified as high-risk cases, there is an opportunity to study the more-potent antiplatelet agent in stable CAD patients with even more complex anatomy. Nonetheless, from a clinical perspective, ALPHEUS shows that “if you have a pretty straightforward patient that you’re planning on discharging home the same day, you can just use Plavix in these stable patients,” she said. “There is no reason to use the more-potent agent. Even if it’s just more minor bleeding, why put them through it?”