The strict echo criteria used to identify patients eligible for COAPT enrollment should also guide decisions in the wake of FDA approval, one expert says. 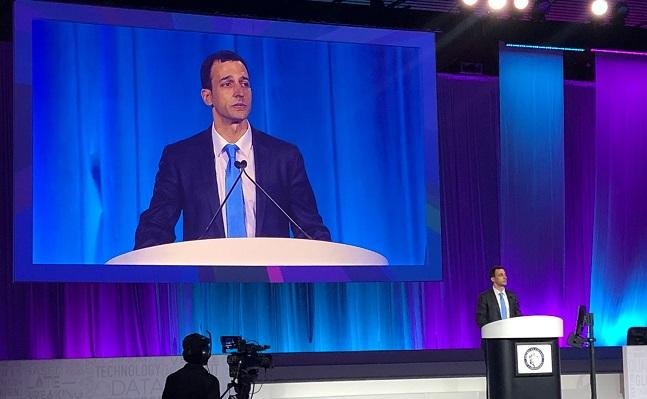 NEW ORLEANS, LA—A detailed look at the echocardiographic results from the COAPT trial has failed to pinpoint any baseline echocardiographic factors that could help valve teams decide which patients with heart failure (HF) and severe or moderate-to-severe mitral regurgitation (MR) would benefit from the MitraClip.

The findings, according to Federico M. Asch, MD (MedStar Health Research Institute, Washington, DC), should reinforce the idea that so long as patients now being selected for the procedure meet the criteria used in the clinical trial, the “real-world” population is likely to benefit to the same degree as patients in COAPT.

“That’s the real message,” said Asch, who presented the analysis as a late-breaking clinical trial at the American College of Cardiology 2019 Scientific Session. “We tried to find groups that would not respond well to the MitraClip; we failed to do that.”

But while the benefit of MitraClip (Abbott) over guideline-directed medical therapy (GDMT) alone was consistent across a wide swath of echo parameters, the fact remains that deaths and first HF hospitalizations were seen in both groups, including nearly half of the patients treated with the clip, leading one commenter to observe that the search for answers must continue.

As previously reported by TCTMD, COAPT produced an eruption of applause when it was presented at TCT 2018 meeting. In more than 600 patients with heart failure and severe functional MR, transcatheter mitral valve repair using the percutaneous clip procedure on top of GDMT significantly reduced not only the primary endpoint of HF rehospitalizations by 47%, but also mortality at 2 years, by 38%, as compared with people treated with GDMT only. The main results, the mortality finding, as well as results for the 10 other secondary endpoints—all statistically significant in favor of the MitraClip—produced whoops of excitement and spontaneous applause in the audience.

As Asch showed today, the rationale for the echo substudy was in part to describe the echocardiographic MR grading criteria used in COAPT to screen patients for enrollment, as well as postprocedure. Only by looking at the echocardiographic characteristics of the COAPT population, serial echocardiographic outcomes, and any baseline features on echo that might distinguish responders from nonresponders can valve teams better understand which patients will benefit most from MitraClip therapy.

“In view of the different results between COAPT and MITRA-FR, despite enrolling the same kinds of patients (all patients with secondary MR), clearly the fact that the results were so different, the outcomes were so different, makes it extremely important that we understand who exactly was enrolled in COAPT,” he said.

He detailed these criteria in depth during today’s late breaker, noting that in addition to having an LVEF between 20% and 50%, a left ventricular end-systolic volume < 70 mm, and secondary MR amenable to MitraClip treatment, patients also had to have moderate-to-severe or severe MR confirmed by specific echocardiographic findings.

It was those MR definitions that Asch drew attention to here today. To be enrolled, he said, patients had to have an effective regurgitant orifice area (EROA) of > 0.3 cm2 or pulmonary vein systolic flow reversal—the majority of patients (86%) met one or both of these criteria. If neither of those were met, however, patients were eligible if they had an EROA of 0.2 cm2 to < 0.3 cm2 with one of three additional criteria, or an EROA either not measured or less than 0.2 cm2, with at least two additional criteria, as itemized in his slides. 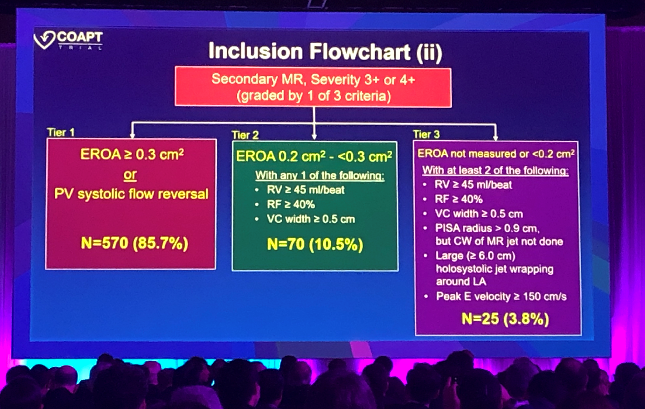 No Baseline Features to Blame

“I think it is very important that, as we try to replicate in clinical practice what this specific clinical trial found, the message is that we have to be consistent in enrolling the same kind of patients,” Asch said, stressing the need to “actually stick with what the COAPT trial used.” That means, “the multiparametric algorithm that we used has to go out in the clinical world for people to use it and understand properly who are the right patients to get this clip,” he added.

Using this algorithm is particularly important in light of the US Food and Drug Administration decision, announced last Thursday, that the agency was extending the device indications for use to include functional (secondary) MR. That decision, though widely anticipated in some quarters, has some people worried about indication creep.

Asch, for one, believes the COAPT enrollment criteria should be a part of the device labelling, but more importantly, that valve imagers will pay close attention and implement the same screening criteria in their programs so that the device is used for patients in whom it can best be expected to work.

In a separate part of the analysis, Asch and colleagues looked at a vast array of different echocardiographic criteria, using median values to allow for a binary analysis looking for significant predictors of benefit. Here, he said, none of the echo measurements proved meaningful in terms of finding useable baseline predictors of MitraClip benefit.

“Strikingly, on every single` subgroup that we looked at—ejection fraction above and below the median, left ventricular end-diastolic volume, left ventricular end-systolic volume, mitral regurgitation severity, tricuspid regurgitation severity, pulmonary vein flow—in any of these groups, when we broke the population in two, above and below the median, the benefit of the MitraClip was of significant benefit,” he said.

Not a Complete Solution

Howard C. Herrmann, MD (Hospital of the University of Pennsylvania, Philadelphia), speaking with TCTMD, offered a few caveats. He pointed out that the clinical endpoint used in the binary analysis presented by Asch today (24-month all-cause mortality or first HF hospitalization) was different from the COAPT primary efficacy endpoint (all heart failure hospitalizations over 24 months). Indeed, the endpoint addressed by Asch today was closer to that used as the primary endpoint in the MITRA-FR trial.

Using this new endpoint, Asch showed that overall, 45.4% of MitraClip-treated patients and 67.4% of control patients died or had a first HF hospitalization within 2 years.

“My bottom line,” said Herrmann, “is that although they could not identify clear echocardiographic subgroups where there was no benefit to the MitraClip, it’s still clear that we don’t have the full answer, because 46% of patients, even after MitraClip, died or had a first heart failure hospitalization by 2 years. So I think we still need more analyses to try to understand who gets the most benefit and for whom there may not be benefit. For now, we don’t have a good echocardiographic criteria to help us who are the best responders and who might not respond to treatment of their mitral regurgitation.”

Herrmann continued: “This suggests that there’s a lot more to be learned here. We’re improving, but we haven’t finished the job when half the patients still die or have heart failure within 2 years.”

We’re improving, but we haven’t finished the job when half the patients still die or have heart failure within 2 years. Howard C. Herrmann

Also speaking with TCTMD, Mary Norine Walsh, MD (St. Vincent Heart Center, Indianapolis, IN), a heart failure specialist and COAPT investigator, stressed that imagers and structural heart disease specialists now seeing patients with heart failure and severe MR must ask themselves whether their echo findings truly mirror those found by the echo core lab in COAPT. “And if not, that would be indication creep,” she said.

Asked whether she thinks a close analysis of echocardiographic differences between COAPT and MITRA-FR will help people tease out the reasons for the different trial conclusions, Walsh said she “wasn’t troubled” by the disparate results. “I think COAPT was a different cohort of patients, and I’m looking for COAPT patients now, in my practice,” she added. “The other thing that’s really, really important is, now that the FDA has approved this [indication], I’m hopeful that patients with heart failure will be referred to valve teams and there might be other therapies that they are eligible for that they haven’t received yet. And those could be medical therapies, they could be [cardiac resynchronization therapy], or they could be a [ventricular assist device], or mechanical support, or transplant.

“It’s not just all about the MitraClip,” she continued. “The increased referral of HF patients with mitral regurgitation to large centers, valve centers, should also increase the use of all heart failure therapies, or that’s my hope.”

Asch's presentation was one of two COAPT substudies presented at the ACC late-breaking clinical trial session this morning. The quality-of-life substudy can be found here.

My Takeaways From TCT 2018: Sunglasses, Shadows, and the COAPT Eclipse