Color-Coded Radiation Monitoring: Coming to a Cath Lab Near You

Use of a system that graphically conveys a patient’s skin dose distribution was associated with lower air kerma values during PCI. 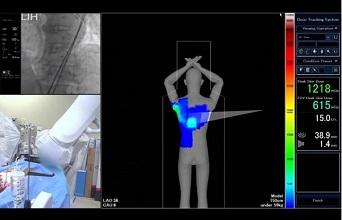 An innovative system, one that tracks radiation beam movement and provides feedback to operators in the form of a color-coded display on the peak skin doses of radiation their patients are receiving, has the potential to substantially reduce the amount of radiation used during PCI, a new study suggests.

Moreover, having the real-time 3-D color graphic, which is shaped like the human body, at hand and using it as a guide during procedures does not add to fluoroscopic or procedural time, report Eiji Ichimoto, MD (Englewood Hospital and Medical Center, Englewood, NJ), and colleagues.

“The skin dose distribution map on the realistic patient graphic and the displayed X-ray beam location can facilitate the management of peak skin dose and reduction of the risk of deterministic injury by avoiding areas approaching skin dose thresholds,” the author write in their paper published online May 30, 2017, in Catheterization and Cardiovascular Interventions.

Their study looked at 323 patients undergoing either diagnostic angiography or PCI at their institution between September 2014 and June 2015; patients were assigned to undergo the procedure with or without use of a skin dose-tracking system (Dose Tracking System, Toshiba America Medical Systems, Tustin, CA). The system is situated adjacent to the fluoroscopy image and displays both numerical and graphic indications of peak radiation skin dose. To track this, it follows beam movement for each projection to obtain a spatial dose distribution map of the patient. The display is blue at the beginning of procedure, turning yellow when peak skin dose reaches 2,000 mGy, and red when it is greater than 3,000 mGy.

Up Next: Color Standards

In an interview with TCTMD, Stephen Balter, PhD (Columbia University Medical Center, New York, NY), said the concept of the color-coded dose tracking for individual patients is not new, though it is not onboard most interventional systems in use today.

“This has been around in one form or another since the late 1990s, . . . and there are a couple of versions of this from various manufacturers,” he said. “But what’s happening now is it’s becoming part of the international standards for new equipment. In a couple of years all new interventional equipment will have this capability.” He predicted the time frame to be approximately 2019, by which time some version of the dose tracking system will be pre-installed, possibly with the option for an operator to turn it on or off.

But before that can happen, Balter, who is on the committee that writes the standards, said all commercially available versions must have a universal color system, something that is not the case today.

“All the manufacturers have their own ideas of what [the colors] should be, and it’s very confusing between systems,” he noted. “We’re starting with the professional societies to have them come up with a color code that they want. The equipment originally will come out with what the manufacturers want, but once the professional societies agree [to a color system] they can just load up the standard code.”

As for the finding that the dose tracking system is most useful for interventional procedures rather than diagnostic angiography, Balter said that makes sense because of the increased decision-making required in PCI, for example, compared with a standard diagnostic study.

On the flip side, Balter said operators can get the same radiation-reducing results without the color coding by paying careful attention to the air kerma and kerma area product measurements.

He added that operators in the current study obtained most of their dose saving by using less cine, which they probably did by storing more fluoro. “You can be aware of this even without having the color picture. This is about dose awareness in general. The color coding adds another dimension to show how the skin was painted with radiation,” he said, adding that knowing when radiation doses are creeping too high is important not just for the patient, but also for operators and other staff in the room.

AHA Statement Urges Radiation Education for All Clinicians and Patients