The approach reduces microembolic signals in the brain, but whether it cuts clinical stroke requires further study. 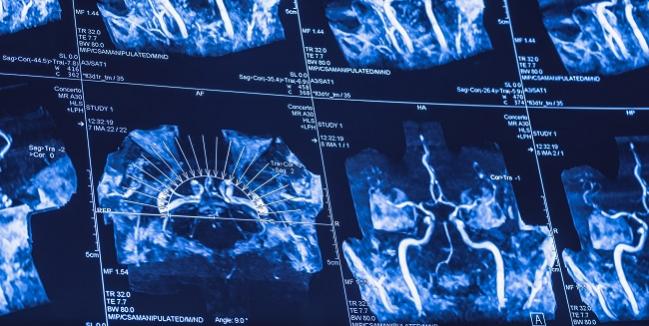 For patients who have soft, lipid-rich carotid plaques that are prone to prolapse during stent implantation, combining proximal embolic protection with newer double-layer stents reduces the risk of debris traveling to the brain during the procedure, a small randomized study shows.

In the 2 x 2 factorial trial of 104 patients, microembolic signals detected by transcranial Doppler were significantly reduced at various stages of the procedure by using proximal versus distal protection and by deploying a double- versus single-layer stent, with the lowest embolic burden seen in patients who received a double-layer stent with proximal protection.

Lead author Piero Montorsi, MD (University of Milan and Centro Cardiologico Monzino, Italy), told TCTMD there are three major procedural aspects that can be addressed to try to improve carotid stenting: vascular access, cerebral protection, and stent type. This study informs the latter two areas, Montorsi said. “Now, proximal protection seems to work better than the [distal] filter [and] the double-mesh [stent] looks to be more effective as compared to the single-layer stent.”

The bottom line, he said, is that “you can select a different type of protection and stent to optimize the procedure.”

Beau Hawkins, MD, who wrote an accompanying editorial with Omar Baber, MD (both from University of Oklahoma Health Sciences Center, Oklahoma City), called the study a proof of concept, noting that it was conducted at a single center by experienced operators.

“In the right hands—good operators that do a lot of carotid stenting—it appears that you can use these novel stents with proximal protection devices and that may reduce the chances of causing embolization to the brain and that, theoretically, should translate to lower stroke risk for the patients,” he told TCTMD. But larger studies powered for clinical events are needed to confirm or refute that, Hawkins added.

The findings were published online January 29, 2020, ahead of print in JACC: Cardiovascular Interventions.

Advancements have been made in carotid artery stenting over the years, although an elevated risk of stroke early after the procedure compared with carotid endarterectomy remains an issue. Cerebral protection devices and stent type could help mitigate that risk, but no definitive evidence as to the optimal strategy exists.

Dual-layer, or mesh-covered, stents have been developed in recent years as a way to trap as much plaque material as possible and reduce the amount of plaque prolapse through the stent struts during deployment compared with single-layer stents with larger openings.

In this new open-label study, conducted at a single high-volume center with experienced operators, Montorsi et al randomized 104 symptomatic or asymptomatic patients with high-risk, lipid-rich carotid plaques to two different types of embolic protection and to two different stents. Embolic protection was either distal with the Filterwire EZ (Boston Scientific) or proximal with the MO.MA Ultra system (Medtronic). Stenting was performed with either the single-layer Carotid Wallstent (Boston Scientific) or the double-layer Roadsaver stent (Terumo); the latter device is not approved in the United States.

Stenting was attempted via the radial approach in 46% of cases; crossover to femoral access was required in 8% of those because of complex vascular anatomy. Ultimately, the procedure was successfully performed in all patients.

The primary endpoint was the number of microembolic signals (MES) detected by transcranial Doppler at various stages of the procedure from vessel access to device retrieval/deflation.

And for the stents, Roadsaver reduced MES count during the last three phases of the procedure—stent deployment, stent dilation, and device retrieval/deflation—compared with the Carotid Wallstent (P = 0.032). Roadsaver maintained its advantage when considering spontaneous MES not tied to any specific maneuver, which occurred in 29% of patients and was less frequent with the double- versus single-layer stent.

Post hoc analysis showed that the combination of proximal protection with the MO.MA Ultra system and stenting with the Roadsaver resulted in the lowest MES load.

During the study, researchers identified four major vascular complications and three clinical MACCE events, with no differences across the four protection/stent groups. In-stent restenosis occurred in only one patient—treated with the Carotid Wallstent—within the 6-month follow-up period.

On multivariate analysis, use of the double-layer Roadsaver stent was associated with worsening patency of the external carotid artery compared with the Carotid Wallstent, but both Montorsi and Hawkins downplayed the relevance of the finding.

Montorsi pointed out that a similar phenomenon was seen with the double-layer CGuard stent (InspireMD), with no significant clinical impact. “It’s not really a problem that should contraindicate use of this device,” he said.

Hawkins explained that stroke is typically related to the internal and not the external carotid artery, with the latter mostly supplying side branches that don’t lead to the brain. So the reductions in blood flow in the external carotid seen with the double-layer stent are not relevant from a stroke standpoint, he said. “I don’t view that as a major limitation of this technology.”

In their editorial, Hawkins and Baber say the study should be interpreted in the context of its limitations, which include a question about the generalizability of the findings to centers with less-experienced operators, the lack of information on the long-term durability of double-layer stents, and uncertainty about the clinical importance of differences in transcranial Doppler-detected MES counts, a surrogate endpoint.

Speaking to that last point, Hawkins said, “If we reduce the risk of embolization, then theoretically we should be getting better outcomes for our patients and lower stroke risk.”

This small study, however, cannot establish that, he said, noting that hundreds or even thousands of patients would be needed for a study powered to look at effects on clinical stroke. Nevertheless, he said, “the preliminary data here is exciting. It looks like it might be effective.”

Montorsi pointed out that further research is needed into the impact of using double- versus single-layer stents over the longer term, which is likely his team’s next step.

He and his colleagues explain in their paper that most of the reduction in total MES seen during the procedure in this study with the combination of the MO-MA Ultra system and the Roadsaver stent—70% to 80%, in fact—was related to use of proximal protection, with the choice of stent playing “a minor, although significant, additional role.”

That confirms proximal protection as the optimal choice during the procedure, but it also “suggests a specific role of [the Roadsaver stent] as a tool to counteract plaque prolapse-related embolization,” they write. “If this holds true, this new stent category may become even more important late after carotid artery stenting.”

Carotid Stenting Makes a Strong Showing in the CREST-2 Registry