The index patient was successfully enrolled on 12th September in Singapore. 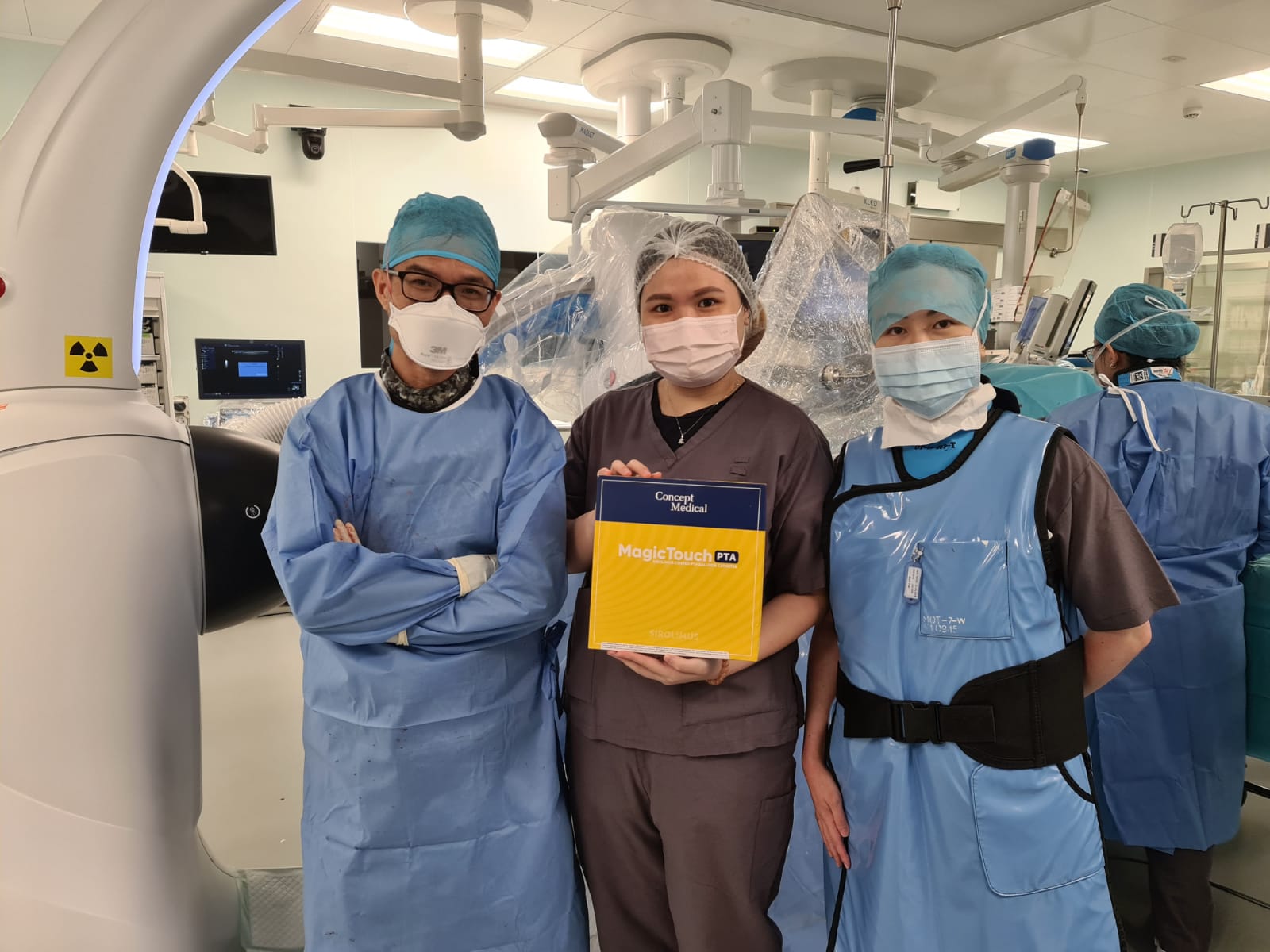 The burden of peripheral arterial disease (PAD) is high globally. Its burden is likely to grow in the coming years given the rising trends in key risk factors such as age and diabetes. In its most advanced stage, patients present as critical limb ischemia (CLI) and many end up with leg amputations.

Current standard of care for severe PAD is revascularization, the majority of which involves the use of balloon angioplasty to unblock the vessel and restore blood flow to the leg. However, these vessels frequently become blocked again, resulting in repeated procedures which is potentially dangerous and may result in loss of limb or even life.

Local drug delivery using drug coated balloons (DCBs) during angioplasty can successfully deliver anti-proliferative drugs to the lesions in the artery, with the aim of keeping the vessel open for longer. Sirolimus coated balloons are considered to be the next new generation of DCBs and the novel MagicTouch PTA sirolimus coated balloon (SCB), has emerged as one of the most promising transcatheter technologies in preventing restenosis for diseased arteries.

The principal investigator of FUTURE-SFA is Associate Professor Edward Choke from the Department of General Surgery (Vascular Surgery) at the Sengkang General Hospital, Singapore.

Associate Professor Edward Choke said “I am inspired by the bold, imaginative and futuristic concepts presented by the Nanolute technology of the MagicTouch PTA sirolimus coated balloon. In contrast to other contemporary technologies, MagicTouch PTA offers a solution which optimizes both the deliverability and the absorption of sirolimus into the vessel wall”.

He added “Initial experience with the XTOSI first in man study suggested that MagicTouch PTA can provide an effective way of revascularization for PAD patients, by keeping the vessels open longer and reducing the need of repeated angioplasty procedures. I look forward to the FUTURE-SFA randomized controlled trial, which will test whether the Magic Touch PTA sirolimus coated balloon can improve the patencies of femoral and popliteal arteries in PAD patients. We hope to establish whether SCB will emerge as the new standard of care which will impact the way we treat PAD”.

The trial will enrol 153 patients with Rutherford class 3 to 6 PAD. These subjects will be randomized in 2:1 fashion to receive either Magic Touch PTA or standard balloon angioplasty.

Primary outcome will be primary patency at 6 months, defined as duplex peak systolic velocity ratio (PSVR) of 2.4 or less.

The trial is designed to follow a rigorous blinding protocol in order to minimise bias. Patients, care providers, investigators and outcome assessors, including vascular technologists performing the duplex ultrasound, will be blinded to the treatment allocations. The patients will be followed up for two years.

For more information about the FUTURE-SFA trial, please visit www.clinicaltrials.gov

MagicTouch is a CE approved and commercially marketed Sirolimus coated balloon, developed using proprietary Nanolute Technology. MagicTouch has been deployed in >50,000 patients in major global markets. Nanolute - the unique drug delivery technology platform of MagicTouch balloon, is designed to deliver sub-micron particles of Sirolimus which are then encapsulated in a biocompatible drug carrier. The carrier-complex is designed to reach the deepest layers of the vessel walls.

CMI is headquartered in Tampa, Florida and has operational offices in The Netherlands, Singapore and Brazil and manufacturing units in India. CMI specializes in developing drug-delivery systems and has unique and patented technology platforms that can be deployed to deliver any drug / pharmaceutical agent across the luminal surfaces