Angina meds tailored to a diagnosis of microvascular disease or vasospasm on invasive tests led to patient-centered improvements at 6 months. 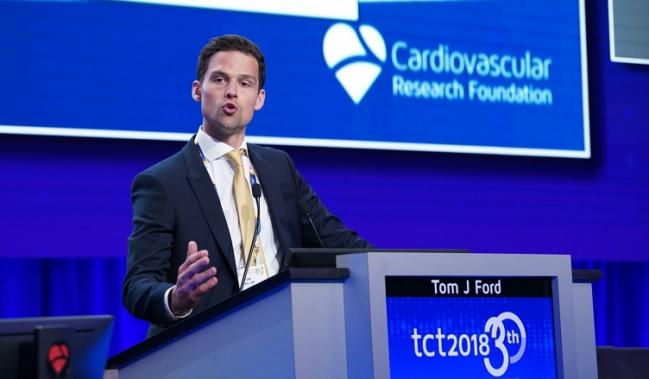 SAN DIEGO, CA—Patients presenting with chest pain and a positive stress test but no sign of obstructive coronary disease pose a quandary for physicians and frustration for the patients themselves. Now, a new randomized, sham-controlled trial of invasive tests to distinguish noncardiac chest pain from microvascular angina or vasospastic angina hints that patients can be accurately diagnosed and given tailored treatment that improves their symptoms and quality of life over 6 months of follow-up.

“CorMicA is the first randomized trial in this space,” Ford said. “The testing was routinely safe and feasible, and it changed the physician diagnosis in half of the patients. Stratified treatment guided by the results of this invasive diagnostic procedure improved health outcomes at 6 months: patients were feeling better, with less angina and a better quality of life.”

CorMicA was conducted at two hospitals in Scotland and enrolled patients referred for a diagnostic angiogram that subsequently found no obstructive coronary disease. Ultimately, 151 patients were randomized equally to invasive diagnostic testing followed by antianginal therapy stratified according to the test results or to a sham procedure followed by standard care.

Both patient groups underwent standard coronary angiography plus the interventional diagnostic procedure (IDP), but IDP results were only provided to the treating physician in the intervention arm. The IDP entailed the introduction of a pressure wire via a guiding catheter, typically into the LAD, for assessment of coronary flow reserve, index of microcirculatory resistance, and fractional flow reserve during intravenous infusion of adenosine (140 μg/kg/min). Incremental concentrations of acetylcholine were sequentially infused during 2-minute periods, followed by vasospasm provocation.

As Ford showed Tuesday, nearly three-quarters of patients randomized in the trial were female. Median age was 61, 10-year estimated risk of cardiovascular disease approached 20%, and the majority of patients had daily or weekly angina.

After IDP, half of the patients were found to have isolated microvacular angina, just under 20% had isolated vasospastic angina, and one-quarter of patients had a mixture of the two. “What was most striking with this cohort was that patients with entirely normal microvascular function was only 12%,” Ford said, a finding only partly explained by the population risk in this part of Scotland and the high threshold for performing invasive tests at the participating hospitals.

At 6 months, those medication changes seem to have made a difference. For the primary endpoint of change in Seattle Angina Questionnaire score, patients in the IDP group improved markedly from baseline, leading to a between-group difference of 11.7 units. The IDP group also saw significant improvements in mean quality of life, visual analogue score, and illness perception. Overall satisfaction also was higher among patients randomized to the intervention group.

Discussing the results in a morning press conference, Azeem Latib, MB, BCh (EMO-GVM Centro Cuore Columbus, Milan, Italy), spoke to the importance of patient satisfaction. “The number of times when you are in the cath lab and you have a patient with a positive stress test and their coronaries are normal, and then [when] you tell the patient their coronaries are normal, there is almost a disappointment,” he said. “To be able to give them a definitive diagnosis and say this is vasospastic microvascular angina, and then more appropriate medical therapy, I think that’s going to be impactful for our patients.”

Ajay Kirtane, MD (NewYork-Presbyterian/Columbia University Irving Medical Center, New York, NY), who moderated the press conference, pointed out that adenosine tests take time, aren’t cheap, and do have side effects. “That’s the reason why there has been move towards resting indices of testing,” he said, adding that for these specific types of functional tests, addressing microvascular disease, “you can’t do resting indices. . . . My interpretation [of CorMicA] is, for these types of these patients, we should be giving adenosine.”

Circling back to this point later, Kirtane added: “Back to the issue of patients not likely adenosine, if the adenosine is going to give them a diagnosis, I bet they’re going to like it a lot more.”

Much of the discussion around Ford’s presentation centered on just how common these patients may be in clinical practice, with several experts noting that the problem is more common in women, as reflected by the CorMicA numbers.

“We have lots and lots of patients who come to the cath lab with positive stress tests and normal coronaries, or normal enough coronaries that we can’t find any epicardial disease to explain [their symptoms],” said David Cohen, MD (Saint Luke’s Mid America Heart Institute, Kansas City, MO). “I think it’s 50-plus percent [of patients with chest pain], but most don’t have symptoms of this severity. The symptom severity has to be a part of the trigger for doing this more invasive work-up.”

For Kirtane, IDP testing might be appropriate for a patient with a normal angiogram who presents with recurrent symptoms. “I’m not sure I would advocate doing this in every person who had normal coronaries who comes in to the cath lab,” he said.

Ford replied: “I totally agree. If someone doesn’t have troublesome symptoms, then we can’t make them any better. But for patients with very disabling angina, I do think we should give that patient a definitive diagnosis and our study is the first to support further research in that area.”

Speaking with TCTMD, Ford reiterated that IDP “needs to be applied sensibly, because there’s a time cost, which is probably the biggest expense.” He estimated that IDP adds approximately 20 minutes to standard angiography, noting, “An extra 20 minutes, I would suggest, is what our patients deserve because if they are debilitated by symptoms and they are still going home with the same symptoms they came in with, as Azeem said, they often feel a bit disappointed.”

That said, while the ESC guidelines offer a starting point, the best medical strategy for different patient groups remains ill-defined. “We’re trying to get to an era of precision medicine,” Ford said. “We’re not quite there yet.” Still, many cardiologists are unaware that beta-blockers should be first-line therapy in microvascular angina. “They still think, give them a nitrate, give them a CCB, so that’s one thing. Nitrates can sometimes make people feel a bit worse, causing dizziness or breathlessness, so we’re hoping that tailoring the therapy may be the answer,” he said.

RADIOSOUND-HTN Suggests Ultrasound May Be Best for Renal Denervation

Even With PSP, Bioresorbable Scaffold Falls Short in ABSORB-COMPARE and ABSORB IV Trials

Coronary Abnormalities May Explain Angina in Patients Without Obstructive Disease