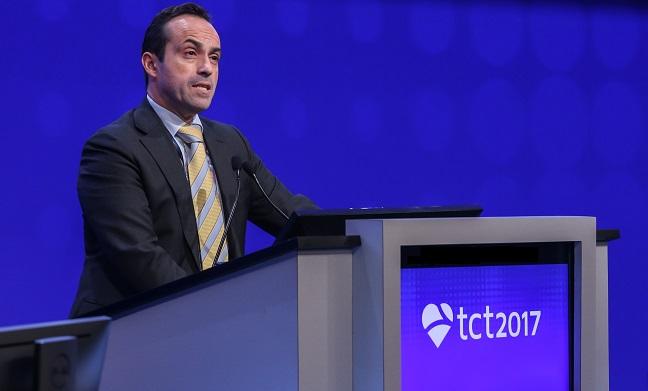 There were no differences in clinical outcomes, although the study was not powered for those endpoints.

“The drug-eluting balloon appears to be an alternative therapy for any in-stent restenosis, negating the need for additional stenting,” Henriques said during a press conference. He noted that the findings—published simultaneously online in the JACC: Cardiovascular Interventions—are concordant with current European guidelines, which provide class IA recommendations for both DES and DCBs for treatment of in-stent restenosis within BMS or DES.

DCBs are not currently available in the United States for use in the coronary vasculature, however, and Roxana Mehran, MD (Icahn School of Medicine at Mount Sinai, New York, NY), who served as moderator of the press conference, said she hopes that will change in the future. She pointed out that the technology has been available in Europe for over a decade.

Even though in-stent restenosis is a rare event with current-generation DES, when it does arise “what we don’t want to do is keep putting in layers of stents if we don’t need to,” she told TCTMD, adding that “having a drug-coated balloon available in the coronaries is going to make life so much easier for our patients.” That’s because patients with at least two layers of stents often end up requiring bypass surgery or brachytherapy, she noted.

“This type of device, obviously with it being similar in performance to drug-eluting stents, would be a very welcome addition to our armamentarium, because one of the things I don’t like to do as a coronary interventionalist is to line up multiple stents inside of each other,” he said. “That just becomes a self-perpetuating problem. So the ability to treat these patients reasonably well without putting in more stents is a tremendous advantage in the long run.”

Though in-stent restenosis has become less of an issue with continuing improvements in DES technology, it remains a challenge in clinical practice, Henriques said. It is usually treated with DES, although other options include DCB, conventional balloon angioplasty, cutting balloon angioplasty, intravascular brachytherapy, laser atherectomy, and BMS.

Predilatation was mandated by protocol for all patients, but the actual rates were 100% and 85.1% in the DCB and DES arms, respectively. Postdilatation was more frequent in the DES group (57% vs 16%).

Weighing the Pros and Cons

Henriques cited difficulties in comparing results across trials and said that taken together, accumulated data indicate that it would be useful to have DCBs as an available tool to treat in-stent restenosis. He noted that one of the trials showing superior angiographic results for Xience—SEDUCE—also showed a lower percentage of uncovered struts in the DCB arm at 9 months.

In their paper, he and his colleagues say that clinicians should weigh the advantages and disadvantages of each approach when choosing the appropriate treatment.

“Currently, (repeat) implantation of a DES arguably remains the most widely used treatment strategy,” they say. “Using a [drug-eluting balloon] instead of an additional stent offers the advantage of delivering antiproliferative medication to the [in-stent restenosis] lesion with no additional deployment of metal with acceptable angiographic and clinical outcomes.”

If the number of exposed stent struts could be reduced using DCBs, as suggested by SEDUCE, it is possible that the duration of dual antiplatelet therapy could be shortened, they add.

Though there are many potential treatments for in-stent restenosis, DCBs and DES remain the most commonly used, the authors say, and “the DARE trial confirms the feasibility of both treatment strategies.”

DARE: A Randomized Trial of a Drug-Eluting Balloon vs a Metallic DES in Patients With Coronary Artery In-Stent Restenosis