In the wake of STICH, some physicians may have extrapolated results to indicate PCI for these patients. Not so fast, a new study suggests. 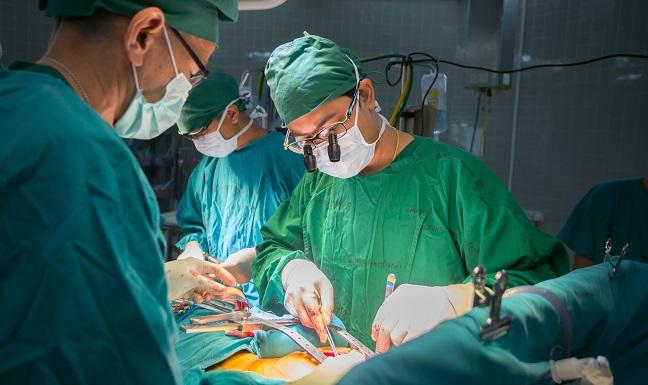 For individuals with an a left ventricular ejection fraction (LVEF) less than 35% and concomitant diabetes, PCI as compared with CABG was associated with an increased MACCE risk, including greater risks of death, MI, and repeat revascularization, over a mean follow-up period of more than 4 years. Similar risks were observed among patients with less severe dysfunction (LVEF 35% to 49%).

According to senior investigator Jayan Nagendran, MD (University of Alberta, Edmonton, Canada), the results help cast some light on a population often excluded from the major trials that compared revascularization strategies in patients with diabetes. In FREEDOM, for example, just 3% of patients in the trial had left ventricular dysfunction.

Following the long-term outcomes from the Surgical Treatment for Ischemic Heart Failure (STICH) trial, which supported CABG over medical therapy in patients with impaired left ventricular systolic function, some physicians conjectured that PCI might also yield the same benefits.

“I think there’s been a little bit of a slide away from what the evidence might suggest,” said Nagendran. “I think cardiologists and interventional cardiologists probably felt that patients with some degree of left ventricular dysfunction would have a worse outcome with surgery, which is why they were tending toward PCI without objective data.”

Published online ahead of the February 27, 2018, issue of the Journal of the American College of Cardiology, the study used propensity matching to compare patients treated with PCI or CABG included in the Alberta Provincial Project for Outcomes Assessment in Coronary Heart Disease (APPROACH) database. The registry collects detailed clinical information on all patients undergoing coronary angiography in Alberta.

I think cardiologists and interventional cardiologists probably felt that patients with some degree of left ventricular dysfunction would have a worse outcome with surgery, which is why they were tending toward PCI without objective data. Jayan Nagendran

In total, 869 patients with multivessel CAD, diabetes, and left ventricular dysfunction underwent PCI and were matched with 869 patients who underwent isolated CABG surgery. Previous studies comparing PCI versus CABG have been criticized for the lack of contemporary drug-eluting stents, but the present analysis, which looks at procedures performed between 2004 and 2016, includes modern-era DES, Nagendran noted.

In terms of secondary endpoints, mortality was significantly higher among PCI-treated patients, including those with moderate and severe left ventricular dysfunction. In those with moderate dysfunction, 26% of patients treated with PCI died at 5 years compared with 16% of those treated with surgery (P < 0.001). For patients with an LVEF less than 35%, the mortality rates for PCI and CABG were 35% and 19%, respectively (P = 0.002).

Repeat revascularization was higher in all PCI-treated patients, while the risk of MI was increased with PCI only among patients with an LVEF less than 35%.

To TCTMD, Nagendran said that based on previous studies, they would have expected CABG to be associated with a higher risk of stroke compared with PCI, but instead, similar stroke rates were seen in the two treatment arms. He said patients with lower LVEFs may have more diffuse disease, including vasculopathy in the carotid arteries, which might explain the lack of benefit in PCI-treated patients.

“This suggests that the placement of catheters into these major blood vessels in diabetic patients carries a significant burden of risk as you’re placing the catheters and entering an area where they can dislodge plaque to cause stroke,” he said.

In an accompanying editorial, Eric Velazquez, MD (Duke University Health System, Durham, NC), and Mark Petrie, MBChB (University of Glasgow, Scotland), state that the definitive advantage of CABG over PCI in this population “should put the cardiovascular community on high alert and spur important next steps.” Such steps include a randomized, controlled trial in order to avoid potential confounding that might have influenced these observational findings.

Like Nagendran and colleagues, the editorialists state that studies of PCI versus CABG in patients with left ventricular dysfunction or heart failure (HF) “rested in no man’s land among the trenches of cardiac surgeons, interventional cardiologists, and cardiologists who treat HF, the STICH trial being the notable exception.”

Until randomized trials are performed, the present findings, which support CABG over PCI, should be “carefully integrated into discussions with diabetic patients with [left ventricular systolic dysfunction] who are facing revascularization,” they write.

Speaking with TCTMD, Michael Farkouh, MD (Toronto General Hospital/University Health Network, Canada), the lead investigator of FREEDOM, pointed out that individuals are living longer with CAD, as well as with diabetes. Thus, those with impaired LVEF are frequently encountered in clinical practice, and there is a tendency for physicians to refer such patients for CABG.

“In the real world, some surgeons will turn these patients down,” he added, making it all the more important to know whether PCI would be of benefit and just how those benefits might stack up against surgical revascularization.

Given the dearth of data, the analysis by Nagendran et al “is the best data we have to understand the comparison of PCI with CABG in this patient population,” Farkouh said.

He said he and others are currently in discussion to conduct a randomized, controlled trial of PCI versus CABG in patients with impaired LVEF.

CABG vs PCI in Diabetic Patients with Left Ventricular Dysfunction