Diastolic Dysfunction Does Not Negate Health Status Benefits of TAVR

An improvement in symptoms is seen with transcatheter valves regardless of the severity of baseline diastolic dysfunction. 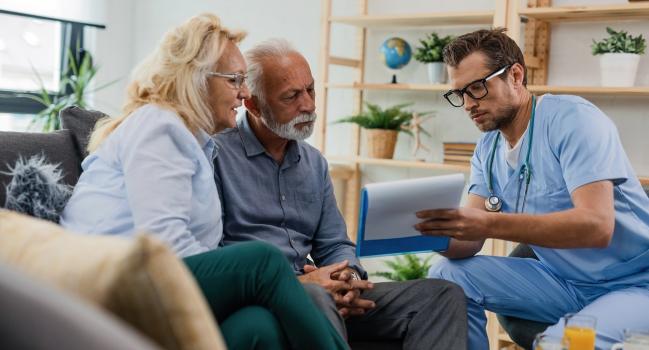 Left ventricular diastolic dysfunction is associated with worse health status among patients with severe aortic stenosis, but TAVR leads to clinically meaningful symptomatic improvements regardless of the severity of that dysfunction, a single-center study shows.

Before the procedure, Kansas City Cardiomyopathy Questionnaire (KCCQ) overall summary scores were lower in patients with the highest grades of diastolic dysfunction (P = 0.004). Within the first month after TAVR, however, there were substantial gains in health status across the board, with no significant differences between categories of diastolic dysfunction; those improvements were sustained out to 1 year.

This new study, he told TCTMD, helps identify factors that can be used to better select patients likely to benefit from TAVR. “Diastolic dysfunction by itself should not be a contraindication for this procedure in patients who really need it,” Malik said. “The symptomatic benefit of TAVR is consistent regardless of patients’ underlying diastolic dysfunction.”

Diastolic dysfunction is just one of many factors physicians take into consideration when evaluating a patient for suitability for TAVR, he pointed out. “Our analysis answers one piece of the puzzle, and there’s room for further studies to extend our understanding about what are the factors that determine which patients would benefit the most from this procedure.”

As seen in prior studies, patients with worse diastolic dysfunction at baseline had higher rates of mortality at 1 year. There were no deaths among patients without dysfunction, with mortality rates of 5.9%, 7.7%, and 13.9% across the other categories. The differences did not reach statistical significance (P = 0.289), likely because of the small size of the cohort and the short duration of follow-up, Malik said.

Baseline KCCQ overall summary scores declined across categories of diastolic dysfunction, from 61.3 in patients without dysfunction to 44.4 in those with a grade 3 deficit.

Overall, health status improved after TAVR, from an average KCCQ overall summary score of 47.1 at baseline to 68.5 at 1 month and 68.4 at 1 year. A change of more than 5 points is considered clinically meaningful. The large gain in health status was seen across categories of diastolic dysfunction, with no difference in KCCQ scores between groups at either 1 month (P = 0.367) or 1 year (P = 0.354).

Moreover, among patients with echo data available during follow-up, there was no association between the change in diastolic dysfunction grade and change in health status seen at either time point.

“Once the aortic valve stenosis was resolved . . . patients across the spectrum of diastolic dysfunction felt the same way in terms of their health status, their day-to-day life, their functional capabilities,” Malik said.

Commenting for TCTMD, Y.S. Chandrashekhar, MD (University of Minnesota and Minneapolis VA Medical Center), said it’s not particularly surprising that diastolic dysfunction wouldn’t correlate strongly with symptomatic improvement after TAVR. A person’s ability to participate in daily activities and have a good quality of life, he noted, is dependent on any number of factors besides diastolic function.

He added that TAVR results in quick relief of the aortic stenosis, with slower resolution seen for the cardiac changes—including hypertrophy and fibrosis—that had developed over the years as the heart fought against the stenosed valve. So regardless of the severity of diastolic dysfunction, patients “felt well because the biggest limitation at that stage, the obstruction, was relieved,” said Chandrashekhar, who wrote an accompanying editorial with Frank Flachskampf, MD, PhD (Uppsala University, Sweden).

He added that one message that can be taken away here is that “if you are putting a TAVR valve in a patient who has severe diastolic dysfunction, you may have waited too long.” If a physician is uncertain about whether to perform TAVR in a patient, but the diastolic dysfunction is increasing in severity over time, “that may make you think about pulling the trigger.” Rather than wait until the patient has grade 3 dysfunction, which means more fibrosis than grade 1 and grade 2, they could try to intervene earlier, said Chandrashekhar.

In their editorial, Flachskampf and Chandrashekhar highlight the important role imaging can play in helping to improve patient care.

Malik agreed, saying that there remains a need for further research into factors that are associated with how well patients do after TAVR. “Imaging, including echocardiography, is a key toward achieving that, and this has been pointed out very nicely in the editorial. . . . There are so many other things that we can do by utilizing all the novel imaging modalities to identify fibrosis, to identify other factors that put patients at a high risk after this procedure. All of these insights taken together will really help us minimize the proportion of patients who do not benefit from TAVR or who actually have a bad outcome after TAVR, and I think that’s the key as we expand the indications of TAVR to include low-risk patients.”