Safety goals were met in the trial, but better efficacy may require ensuring complete coverage of the three major cerebral vessels. 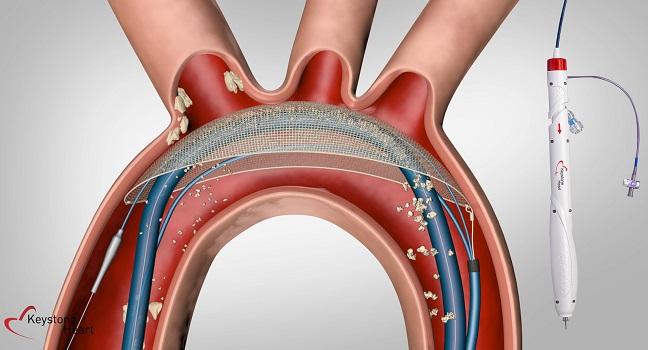 (UPDATED) The TriGUARD 3 cerebral embolic protection device (Keystone Heart), designed to cover all three cerebral vessels during transcatheter heart procedures, is safe for use during transfemoral TAVR, according to the findings of the REFLECT II trial. But it remains unclear whether it improves patient outcomes.

The primary safety endpoint was a VARC-2-defined composite of events at 30 days—all-cause mortality, all stroke, life-threatening or disabling bleeding, stage 2 or 3 acute kidney injury, coronary artery obstruction requiring intervention, major vascular complications, and valve-related dysfunction requiring a repeat procedure. The observed rate of 15.9% (with a standard deviation of 22.5%) came in under 34.4%, the performance goal based on prior trials (P = 0.0001 for noninferiority), according to Jeffrey Moses, MD (Columbia University Irving Medical Center, New York, NY, and St. Francis Hospital, Roslyn, NY).

Compared with controls undergoing unprotected TAVR, safety events were numerically higher in the TriGUARD 3 arm. Moses attributed that primarily to TAVR complications not related to the device, “which was delivered and extracted without issue,” he said during his virtual TCT Connect 2020 presentation.

The device failed to provide a significant benefit in terms of clinical efficacy when considering adverse event rates, worsening of stroke symptoms, and burden of cerebral lesions. Moses pointed out, however, that a post hoc diffusion-weighted MRI analysis suggested that the TriGUARD 3 might reduce larger ischemic lesions in the brain, “which may be more important clinically,” he said. “And with improved device stability to achieve reliable, complete coverage, we hope this will improve outcomes with this device.”

Although rates of TAVR-related stroke have come down over the years, it remains an issue, occurring in 2% to 6% of cases, Moses reported, calling stroke an “Achilles’ heel” of the procedure. There is one cerebral embolic protection device available in the United States—Sentinel (Boston Scientific)—“but thus far there’s been no actual adequately powered trial to really demonstrate the efficacy of cerebral embolic protection in preventing stroke,” Moses said. Debate over how extensively the devices should be used continues.

The TriGUARD 3 device, which has CE Mark approval in Europe but has not been cleared by the US Food and Drug Administration, consists of a mesh that sits below all three major vessels leading to the brain. It’s designed to deflect any debris created during TAVR and other structural heart interventions downstream. Delivery is via the femoral artery through a sheath similar to the one typically used during TAVR, “so it fits into the workflow very easily,” Moses said.

Preliminary studies of an earlier iteration of the device—the first-generation TriGUARD HDH—indicated that it reduced measures of cerebral ischemic lesion burden on MRI during TAVR.

Composite safety events were more common in protected patients through 30 days, although the difference did not reach statistical significance (15.9% vs 7.0%; P = 0.11). “When you break that down, it is predominantly due to bleeding complications and vascular complications engendered on the TAVR side, not at the place where the device was actually implanted,” Moses said.

The 30-day stroke rate also was numerically higher in the device group (8.3% vs 5.3%; P = 0.57). But, Moses said, there was no difference in stroke rates early after the procedure, with events accumulating over the first 30 days, “which is not related to the device.”

Turning to the efficacy analysis, which included 112 protected patients and 119 pooled controls, use of TriGUARD 3 held no advantage over unprotected TAVR for a primary efficacy score (P = 0.857). Patients in the device arm had numerically higher rates of all-cause mortality or any stroke at 30 days (9.8% vs 6.7%; P = 0.475) and worsening of the NIH Stroke Scale score before discharge (14.1% vs 7.6%; P = 0.176). The proportion of patients with cerebral ischemic lesions was about 85% in both groups, and the total cerebral lesion volume was not significantly different between the device and control groups (median 215.39 vs 188.09 mm3; P = 0.405).

Moses also presented an MRI analysis of patients who had full coverage of all three cerebral vessels with TriGUARD 3 throughout the TAVR procedure, 59.3% of the group. Control patients persistently had larger lesions, “but the larger lesions are not really present in the treatment arm when you have three-vessel coverage,” Moses said. “So that at least indicates that [if] we have three-vessel coverage, there is a filtration effect by this device even though we didn’t see a clinical effect.”

Dee Dee Wang, MD (Henry Ford Health System, Detroit, MI), a discussant at a press briefing, said, “The MRI images are definitely very compelling to understand because the larger lesions are the ones that we always associate with clinically impactful strokes that are related to our TAVR clinical outcomes and [Kansas City Cardiomyopathy Questionnaire] scores.” She asked Moses to comment on the “self-positioning” capability of the device and whether there is an operator learning curve that might affect outcomes.

“I think there is a learning curve, and you need a little ‘care and feeding’ of this device to get it in position,” Moses responded, noting that newer versions of the device have a loader that maximizes an operator’s ability to keep it in the proper place. “I think some people thought it was self-positioning in the sense that you didn’t have to do much of anything, but you had to place it carefully using the wire in a proper way to keep it abutted into the north wall of the aorta.”

In dozens of cases performed in Europe using the latest iteration of the device, “it seems to be performing more according to what we would hope, with much higher levels of complete coverage,” Moses said.

To TCTMD, Wang said it would be nice to have a subanalysis looking at outcomes with the TriGUARD 3 device after operators have gotten through the learning curve. Another study of the device with a higher proportion of patients with complete protection also would be helpful, she indicated. “I look at this trial, and if they had 100% successful implantation, what would the results have been then and would that have shown more efficacy?”

But based on what Moses reported here, particularly regarding the potential reduction in larger lesions, Wang said the device “holds promise.”

Who Should Be Protected?

The panel discussion following Moses’ presentation turned to the fact that it has been difficult to correlate use of embolic protection devices with improvements in patient outcomes.

“I remain intrigued by the disconnect between imaging biomarkers, surrogate endpoints, and clinical events,” Bernard Prendergast, MD (St Thomas’ Hospital, London, England), said. Information from this and other trials “leaves us with the difficult question as clinicians as to who should have cerebral protection. Because we’ve all plucked large bits of valve, calcium, or thrombus out of protection devices at the end of procedures and we feel we’ve done the patients some good,” he said. “But on the other hand, on the basis of the trials, it doesn’t seem to be translating into clinical benefits. . . . I think we’re still guessing as to who should have one, and that’s difficult.”

Demonstrating a clinical benefit in smaller studies is a challenge, Martin Leon, MD (NewYork-Presbyterian/Columbia University Irving Medical Center, New York, NY), said, noting that there is a 3,000-patient trial ongoing in the United States (PROTECTED TAVR). Studies with small sample sizes, like those performed for cerebral embolic protection during TAVR, tend to rely on surrogate endpoints, and the field has not been good at selecting which ones to use, Leon said. Complicating matters further, he added, is that these studies often involve early-stage devices and relatively inexperienced operators.

Leon’s takeaway regarding use of embolic protection devices during TAVR? “As long as you feel comfortable about safety—I mean, to me that’s terribly important that we’re not doing any harm with these devices—then I would allow some flexibility in being able to accumulate a lot more data to be able to demonstrate that there is clinical benefit that would justify either selective or systematic use,” he advised.

Regarding TriGUARD 3, Leon said more data are needed to ensure that the device is safe and can achieve full coverage of the great vessels. “And then I think larger studies that demonstrate clinical benefit will need to be done to create confidence amongst operators that this genre of device is really meaningful.”

Note: Moses is a faculty member of the Cardiovascular Research Foundation, the publisher of TCTMD.