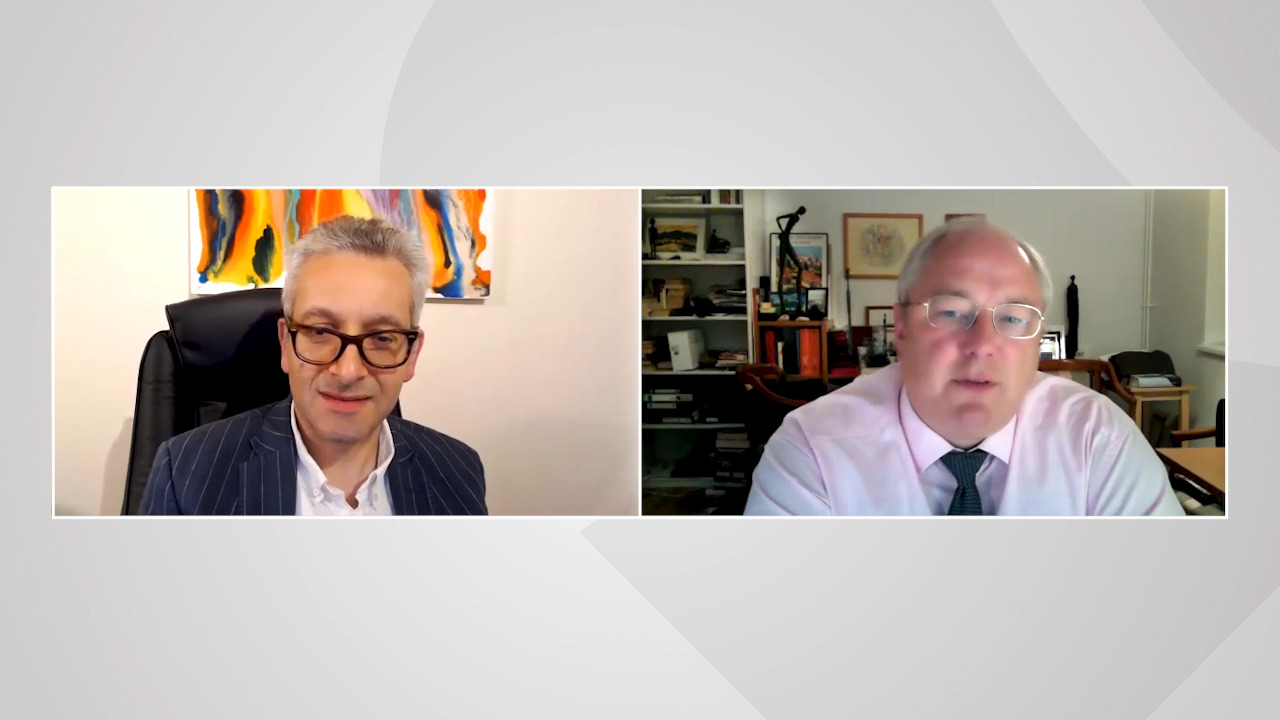 Stefan Anker, MD, PhD (Charité Universitätsmedizin Berlin, Germany), who reported the results during the virtual European Society of Cardiology Congress 2021, called this a “clinically meaningful difference” that was driven by a reduction in hospitalizations (CV deaths were not significantly different between groups).

The benefits, first revealed as top-line results back in July, were consistently seen in patients with and without diabetes, as well as in subgroups defined by LVEF and sex.

Published simultaneously online in the New England Journal of Medicine, “these results represent the first trial to show unequivocal benefit of any drug on major heart failure outcomes in patients with heart failure and a preserved ejection fraction,” Anker said at a media briefing.

Shelley Zieroth, MD (University of Manitoba, Winnipeg, Canada), past president of the Canadian Heart Failure Society, said the presentation marks “a historical day in heart failure management. I’ve waited 15 years for a positive trial in HFpEF, and we finally have it. The EMPEROR-Preserved trial is the first trial ever in patients with symptomatic HFpEF to meet its primary endpoint, and I think that very fact needs to be celebrated.”

Discussing the results after Anker’s Hot Line presentation, Frank Ruschitzka, MD (University Hospital Zurich, Switzerland), was similarly effusive, saying, “This is undoubtedly a landmark study. It is a giant step forwards for patients for whom we didn’t have treatment before in the patient population with an ejection fraction above 40%.”

Moreover, “it’s a feast for science and it will help us clearly redefine heart failure,” he said, alluding to discussions sparked by the EMPEROR-Preserved findings showing an attenuation of treatment effect at higher EF levels. Experts debated what that means for how patients with heart failure should be categorized according to various EF cutoffs moving forward.

Though the trial was billed as including a HFpEF population, it included some patients with EFs of 41% to 49%, which was previously defined as midrange but is now classified as “mildly reduced” EF in the just-released update to the ESC heart failure guidelines; HFpEF is defined by EFs of 50% or higher.

“Maybe it’s time now with the results of EMPEROR-Preserved, where a drug works on both sides of an arbitrary threshold, that we see it more as a global cardiac dysfunction and rename anything north of 60% probably normal and anything below that a reduced ejection fraction,” Ruschitzka said.

As for why the EMPEROR-Preserved results were not taken into account when the new guidelines were being crafted, the answer is simple, according to Theresa McDonagh, MBChB, MD (King’s College London, England), one of the guideline chairs: the cutoff for evidence to consider was the end of March 2021.

She said the trial, having met its primary endpoint, will influence future iterations, particularly because it showed a large effect: “In terms of the magnitude of reduction and the fact that we’ve got nothing in HFpEF, [that] would sway people to seeing this as something we should be considering here.” Exactly how the recommendations will be crafted in the future will depend on other ongoing trials, like DELIVER.

But even if EMPEROR-Preserved isn’t in the current version of the guidelines, it doesn’t mean it can’t influence practice, McDonagh indicated. “Guidelines are updated rather slowly. That doesn’t stop people starting to think about using it now,” she said, pointing out that practice will be affected by regulatory decisions and changes to local protocols. “Guidelines don’t have to drive things from top down. They’re not commandments. They can be bottom-up implementation as well.”

Empagliflozin and another SGLT2 inhibitor—dapagliflozin (Farxiga; AstraZeneca)—have previously been shown to reduce adverse clinical outcomes in patients with heart failure and reduced ejection fraction (HFrEF), in the EMPEROR-Reduced and DAPA-HF trials, respectively.

No trials of any drug focused on HFpEF—until now—have met their primary endpoint. It remains to be seen in the DELIVER trial whether dapagliflozin can repeat the success empagliflozin has demonstrated in this population.

For EMPEROR-Preserved, investigators randomized 5,988 patients with NYHA class II to IV heart failure and an ejection fraction greater than 40% (mean age 72 years; 45% women; mean LVEF 54%) to empagliflozin 10 mg once daily or placebo, both on top of standard therapies, at 622 centers in 23 countries. Patients were required to have an estimated glomerular filtration rate (eGFR) of 20 mL/min/1.73 m2 or higher along with either structural heart disease or a heart failure hospitalization within the past year. Nearly half (49%) of patients had diabetes.

The reduction in the trial’s primary composite endpoint was mostly attributed to a lower number of heart failure hospitalizations, with fewer first and recurrent admissions (407 vs 541; HR 0.73; 95% CI 0.61-0.88). Ruschitzka agreed with Anker that “this is clinically meaningful, very meaningful.”

In terms of safety, uncomplicated genital and urinary tract infections and hypotension were more commonly observed with empagliflozin, although Anker said there were no new safety signals identified and the overall safety profile was good.

He compared the findings of EMPEROR-Preserved with other trials of HFpEF over last 18 years, showing it to be the first to demonstrate definitive benefits.

Benefits Across Range of EFs

Overall, the data show that empagliflozin’s effects on heart failure outcomes were relatively consistent across the two trials, with a roughly 30% reduction in hospitalizations across a range of EFs from less than 25% to less than 65%. The magnitude of the effect lessened at higher ejection fractions, an attenuation that has been observed in other HFpEF trials, Packer said. Of note, he reported that for patients with ejection fractions between roughly 42% to 62%, the effect of empagliflozin was greater than what was observed with sacubitril/valsartan (Entresto; Novartis) in the PARAGON-HF trial.

“These findings demonstrate the benefits of empagliflozin across a broad range of patients with heart failure, specifically those with ejection fraction of less than 60% to 65%,” Packer said. “These patients are not being effectively treated with currently available agents.”

Speaking to the EMPEROR-Preserved results specifically, Zieroth said this is “a big day for patients living with HFpEF, a big day for heart failure clinicians.”

The results are likely to change practice, she indicated, because they “finally provide us with evidence to propose changes to HFpEF guidelines, as it met its primary endpoint. To date, we’ve only had weak recommendations for HFpEF based on predominantly differences in secondary endpoints. And furthermore, we know that ejection fraction is dynamic, and to have an agent with evidence-based clinical trial data to support its use across a continuum of ejection fraction really further simplifies the implementation of empagliflozin as a therapy for patients living with heart failure.”

It’s clear that there was a blunting of the effect of empagliflozin at higher EFs, and that shouldn’t necessarily come as a surprise, Rudolf de Boer, MD, PhD (University Medical Center Groningen, the Netherlands), commented after Packer’s presentation, citing similar analyses from the trials of sacubitril/valsartan.

He underscored the relevance of determining where treatment benefits wear off, noting that across heart failure trials, 25% to 40% of patients have EFs above 60%. “The evidence from several trials now . . . shows that all of these drugs seem to have no effect when EF exceeds 60%, and this is a sizeable proportion of heart failure with preserved/midrange ejection fraction,” he said.

The discussions touched on how to define “normal” EF, with McDonagh pointing out the European Association of Cardiovascular Imaging defines it as 52% for men and 54% for women. She said more research is needed to address this issue, however.

John McMurray, MD (University of Glasgow, Scotland), who moderated the session at which the results were presented, raised the possibility that the 50% upper limit to define mildly reduced EF in the brand-new guidelines may have to be shifted. “I think I’m seeing a consistent story emerging where that 50% upper limit for mildly reduced is probably not viable anymore.”

Packer supported that idea, saying, “I think the 50% threshold is no longer viable. I think that our concept of 40% to 50% as mildly reduced now has to be revisited. It has to be shifted upwards.”

Rather than fixating on how to define a normal EF, Packer added, “we really have to figure out who these patients are who have ejection fractions of 65% or greater who have dyspnea. I’m not certain they have heart failure in many, many cases.”

Addressing that issue, Zieroth said it may be that patients with EFs that high have other comorbidities that are mimicking HFpEF, which could be lessening the benefit of the treatment. De Boer agreed, saying “there appears also to be a subset of patients that may have complaints but not so much because of cardiac disease but maybe other diseases that clearly are not as amenable to cardiac interventions as cardiac disease would be.”

Sorting out what’s going on in this group will be important in the future, Packer said.

Biykem Bozkurt, MD, PhD (Baylor College of Medicine and Michael E. DeBakey VA Medical Center, Houston, TX), immediate past president of the Heart Failure Society of America, commented to TCTMD that researchers will have to sort out whether SGLT2 inhibition is effective in patients with “normal contractile performance and normal EF, which requires a definition beyond LVEF.

“LVEF measurement is load-dependent and with high inter-reader variability,” she explained via email. “Load-independent indices of LV performance and additional structural characterization of the ventricle (eg, LV dilation) will be important to define HF in individuals with normal systolic performance. Maybe these agents are effective only in patients with systolic dysfunction (regardless of EF, as systolic dysfunction can be present in patients with seemingly normal EF). So, it may be time for us to change our categorization beyond LVEF and start focusing on biology and underlying mechanisms.”

Ruschitzka echoed that idea. “Maybe it’s time that we come up with some new names for how we dichotomize heart failure by an arbitrary threshold, and let’s from now on focus not on the ejection fraction, [but] focus on the etiology and focus on understanding the pathophysiology to further improve our treatment.”

For Zieroth, the implications for patient care are clear: “I think that certainly for those patients with less-than-normal ejection fractions, typically lower than 60%, we now have a treatment option. For those over 60%, I think the jury is still out, and it just really speaks to the need for ongoing research and understanding heart failure and HFpEF phenotypes.”