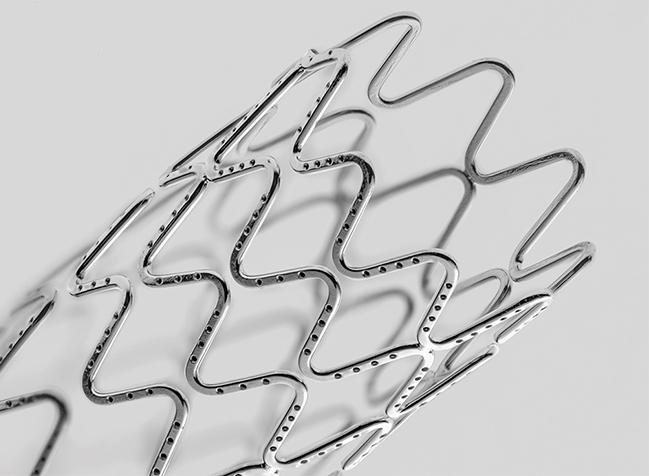 WASHINGTON, DC—An investigational stent that releases an antiproliferative agent without the need for polymer has performed well through the first 9 months of follow-up in a first-in-human study, with high rates of early strut coverage and a degree of late lumen loss comparable to that seen with a durable-polymer DES.

No cases of binary restenosis were observed with the drug-filled stent, and only one patient—who had stopped dual antiplatelet therapy (DAPT) for a surgical procedure—had a target lesion failure event, Stephen Worthley, MBBS, PhD (Royal Adelaide Hospital, Australia), reported here today at TCT 2016.

The study, published simultaneously online in JACC: Cardiovascular Interventions, “forms the premise of a potential role for this [stent] in limiting dual antiplatelet therapy, but obviously that would be dependent on further randomized controlled trials,” he said.

Commenting on the study for TCTMD, Shing-Chiu Wong, MD (NewYork-Presbyterian Hospital and Weill Cornell Medicine, New York, NY), agreed that any impact of such a device on DAPT duration would require larger trials powered for assessments of hard clinical outcomes.

But, he said, the early results are “quite comforting,” particularly in the context of the 2-year findings from the LEADERS FREE trial, in which a polymer-free, drug-coated stent had superior safety and efficacy compared with a BMS in patients with high bleeding risk who received just 1 month of DAPT.

“So if you put that in a broader perspective, the polymer-free type of stent platform is definitely very, very encouraging and tantalizing in terms of patient care,” Wong said, noting that the current study is just the first step for this particular device.

Currently available DES use either a durable or biodegradable polymer to control the release of antiproliferative agents to prevent restenosis, and there is evidence from animal studies that polymers spark an inflammatory response, delaying healing and endothelialization, Worthley said. That process explains the need for prolonged DAPT, he added.

Polymer-free stents have thus far not been able to sustain the release of antiproliferative agents over the 3 or 4 months required to inhibit restenosis, he said.

This new stent, based on Medtronic’s Integrity platform, has 81-µm struts and consists of a triple-layered wire with a continuous internal lumen coated with sirolimus, a middle tantalum layer for radiopacity, and an outer cobalt chromium layer for strength. Small holes on the abluminal surface allow the drug to elute via natural diffusion into the vascular wall. Worthley said 90% of the drug is released over 90 days and 95% over 120 days.

Early results achieved with the stent were examined in the RevElution study, which was conducted at 14 centers in Australia, Brazil, and Singapore. Investigators enrolled 100 patients with de novo coronary lesions measuring 2.25 to 3.50 mm in diameter and 27 mm or less in length. There are two separate 50-patient cohorts, one for 9-month follow-up and one for 24-month follow-up, with optical coherence tomography (OCT) performed in a subset of 30 patients in each group. Worthley reported results for the first 50 patients with 9-month follow-up.

Lesion, device, and procedural success were achieved in all patients.

The primary endpoint of the study was angiographic in-stent late lumen loss at 9 months compared with historical control data from the RESOLUTE US study of the zotarolimus-eluting Resolute stent (Medtronic). That figure was 0.26 mm with the drug-filled stent and 0.36 mm with Resolute, which met criteria for noninferiority (P < 0.001).

OCT showed that median stent strut coverage was 91.4% at 1 month, 95.6% at 3 months, and 99.1% at 9 months. IVUS revealed six cases of stent malapposition immediately after the procedure, with two persisting at 9 months. There were no cases of late acquired malapposition.

The one patient who had target lesion failure had a non-Q-wave MI that occurred a week before the 9-month follow-up, Worthley reported.

What Are Prospects for Innovative Stents?

Roxana Mehran, MD (Mount Sinai School of Medicine, New York, NY), who moderated a press conference at which Worthley presented the results, said, “I think the big message here is that we continue to see improvements in even metallic DES.”

But whether those incremental advancements will lead to large shift in which devices are used remains in doubt.

“To a large degree, stents have been commoditized, and price is a major deciding factor for what’s adopted in clinical practice right now,” commented Michael Mack, MD (Heart Hospital Baylor Plano, TX). “That very definitely is a major obstacle toward clinical adoption of new innovative stents, no matter how good they are technically.”

“The challenge these days is so few of the devices that are coming on the market have that level of differentiation to make them clearly favored over what we already have,” Cohen said. “So unless something comes along that is so much easier to use or has clearly demonstrated better long-term safety or efficacy, it’s going to be a very slow shift and may be driven by things more like price than anything else.”

Note: Multiple co-authors are faculty members of the Cardiovascular Research Foundation, the publisher of TCTMD.

The Drug-Filled Stent and the Start of RevElution