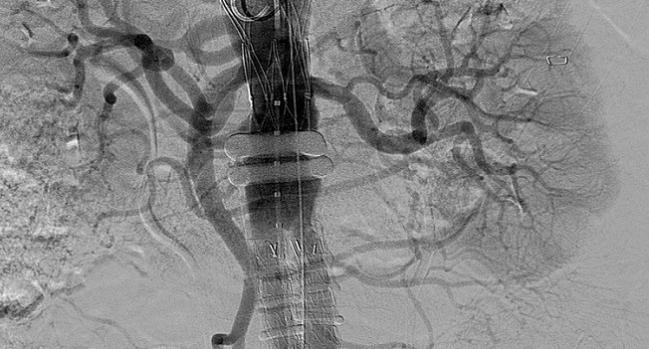 Compared with open surgery, endovascular repair of ruptured abdominal aortic aneurysms (AAAs) yields better clinical and survival advantages, better quality of life (QoL) for patients, and savings for the healthcare system, according to mid-term outcomes from the IMPROVE trial.

Although early data from the trial showed no differences between the two strategies in terms of mortality, the rate of death by 3 years was lower among those treated with EVAR compared with surgery (42% vs 54%; OR 0.62; 95% CI 0.43-0.88).

“From the clinician perspective, it was disappointing that the endovascular strategy did not improve early survival and it seems that shock is the killer, irrespective of type of aneurysm repair,” the study’s lead author, Janet T. Powell, MD, PhD (Imperial College, London, England), told TCTMD in an email. “However, it is likely that . . . the longer intensive care stays and greater renal support needed for the open repair patients take their toll in the mid-term.”

The EVAR group also spent fewer days in the hospital compared with the surgery group, and these patients had lower overall costs associated with their care, which resulted in a savings difference of about $3,000 US dollars (£2605).

The IMPROVE trial included 613 patients with ruptured AAA or aortoiliac aneurysm who were treated at one Canadian and 29 British centers between September 2009 and July 2013. Patients were randomized to open repair (n = 297) or immediate CT scanning followed by EVAR, if anatomically suitable (n = 316).

At a mean follow-up of 4.7 years, 179 patients from the EVAR group had died versus 183 in the open-repair group (HR 0.92; 95% CI 0.75-1.13). Additionally, adjusted Kaplan-Meier survival curves confirmed lower mortality in the EVAR group between 3 months and 3 years compared with surgery (HR 0.57; 95% CI 0.36-0.90). A closer look at causes of death determined that the excess mortality in the surgery group was not directly related the aneurysm and its repair.

Rate of reintervention related to aneurysm was similar in the EVAR and surgery cohorts. Of note, new reinterventions for life-threatening conditions were observed to occur at a slow but steady rate between 3 months and 3 years in both groups. “Patients and their families ranked amputation as the most adverse reintervention” among these, the researchers report.

The risk of late secondary rupture has been a persistent concern with EVAR in AAA, as has the need for continued surveillance. To TCTMD, Powell said there were two cases of late rupture after EVAR in the mid-term follow-up, both of which were associated with type I endoleak, but neither of these ruptures were fatal. By contrast, there was one secondary rupture after open repair.

“So, no conclusions can really be drawn about the risk of secondary rupture,” she noted. “However, it might make sense to keep a slightly closer eye on these patients than after elective aneurysm repair.”

In the first year after intervention, overall QoL was higher in the EVAR group. But by year 3, QoL was similar in both cohorts. Quality-adjusted life-years (QALYs) gained were higher for women than for men in the EVAR group, and for those with the highest baseline Hardman index, but were otherwise similar across subgroups.

Mean hospital stay was 14.4 days in the EVAR group and 20.5 days in the surgery group. Cost-effectiveness analyses showed that in addition to the savings, the probability that the EVAR strategy is more cost-effective was more than 90% across all willingness-to-pay thresholds for a QALY gain.

For Powell and colleagues, the results suggest that the EVAR strategy should be more widely adopted in patients with ruptured AAA.

“Patients with rupture are usually too ill to fully appreciate and weigh up the choices,” Powell observed. “EVAR is only the correct choice if the shape of the patient’s aorta is suitable for this type of repair. When EVAR is pushed into unsuitable aortic anatomy the mortality rate increases rapidly and a conversion to open repair is usually fatal. So, it is important to make the right choice first time. From a patient perspective, EVAR is associated with shorter stays in hospital and a very strong chance of being discharged directly to home, rather than having to recuperate in another hospital or nursing facility.”

In an accompanying editorial, Martin Björck, MD, PhD, (Uppsala University, Sweden), calls the 3-year results “convincing” in light of the emergence of a survival benefit for EVAR coupled with the QoL improvements and cost savings.

But Björck notes that the findings are at odds with long-term data on patients with intact AAA. In the 15-year follow-up of EVAR1, the early advantage of an endovascular strategy over surgery disappeared. EVAR patients had more cancers and greater risk of aneurysm rupture such that from 8 years on, while the surgical group had better survival.

Björck says the conflicting findings suggest that physicians must “tailor treatment depending on the patient and the presentation.” This includes taking into account individual patient characteristics, including life expectancy, when decided between the two strategies, he adds.