Female Cardiologists Underpaid and Outnumbered, with Ramifications for Patients and Profession

ORLANDO, FL—Women remain vastly underrepresented in cardiology, are more likely to work in general/noninvasive cardiology, and are less likely to be have an interventional cardiology subspecialty or to earn salaries similar to their male colleagues—even for performing the same tasks.

Those are some of the new findings drawn from a practice administrators’ database (MedAxiom) with 2013 data from 2,679 cardiologists from 161 practices. 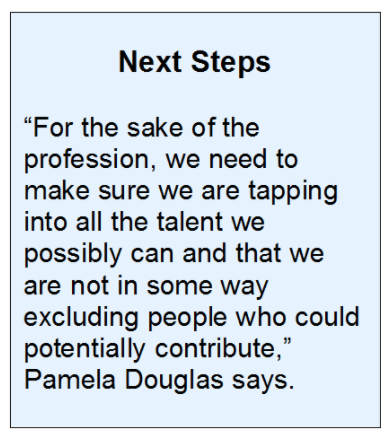 According to senior author Pamela Douglas, MD, of Duke Clinical Research Institute (Durham, NC), this is the first time a study has captured the extent of the discrepancies between male and female cardiologists in clinical practice.

“People have looked at gender disparities in academic medicine because it’s easier to get salary data from universities and across multiple specialties, but generally those don’t provide the amount of granularity in both job description and compensation that we were able to get from the MedAxiom data,” Douglas told TCTMD. “That’s really important, because the first thing that becomes clear is that the male and female cardiologists do very different things with their training. People sort of knew that—that there were less women in the cath lab and more in the office—but I don’t think the magnitude of the difference has really been clear.”

Douglas is presenting the study as a poster at the American Heart Association 2015 Scientific Sessions, with the results published simultaneously in the Journal of the American College of Cardiology, with first author Dr. Reshma Jagsi of University of Michigan, Ann Arbor.

For their analysis, the researchers constructed a regression model of salary that included a vast array of variables spanning personal, job, and practice characteristics. In a second analysis, they used the Peters-Belson technique—a standard labor economics tool for evaluating wage differentials—to assess the accuracy of the multivariate model. This method allowed researchers to construct a full model for compensation based on the male cardiologist data, then plug the actual data for the female cardiologist into the model to compare observed and expected wages.

They found that women were twice as likely as men to have specialized in general/noninvasive cardiology (53% vs 28%), whereas men were 4 times more likely than women to have interventional cardiology as their subspecialty (11% vs 39%). In terms of work day, 91% of male cardiologists worked full time compared with 80% of women, although only 6 days separated the number of days worked by men vs women (217 and 211, respectively).

Median annual salaries, however, were more than $100,000 higher for men than for women ($502,251 vs $394,586). Even after adjustment for multiple personal, job, practice, and productivity characteristics, gender was significantly and independently associated with salary, with women making more than $37,000 less than their male counterparts.

To TCTMD, Douglas noted that the type of clinical work predominantly performed by women in cardiology is deemed “cognitive” as opposed to “invasive,” and the US clinical reimbursement system rewards the latter at a higher rate than the former. The job descriptions, says Douglas, are “apples and oranges, so it’s no surprise that apples and oranges are compensated differently. But even when you control for that with every possible thing we can think of, the level of compensation is still different. So it’s the salaries that are falling short, it’s not the women that are falling short.”

Other studies addressing the gender gap in cardiology and medicine have suggested that women themselves choose their areas of specialization in order to accommodate other priorities, including family, and this accounts for many of the gender differences.

That may be, said Douglas, “but it’s a pretty facile statement to say [these discrepancies exist] because women don’t want to work very hard, because they want to be at home with their babies. Maybe that’s true, maybe not. But that’s not an assumption we should actually make without testing it. … Women obviously do choose, but do they do that because the other doors aren’t as open to them, because it’s not a welcoming environment? Or do they make that choice because truly, all other things being equal, that’s what they’d want to be doing?”

Some of the forces at play are cultural and others, including the higher value placed on invasive vs cognitive activities are “structural across the house of medicine, and changing them would be very difficult,” Douglas said.

She said it is important to examine the reasons behind the data for women working in or considering a career in cardiology, the patients they take care of, and the profession as a whole.

Douglas pointed out that women for the past 10 years have made up half of the US medical school student body and comprise 50% of internal medicine residencies—the “feeder group for cardiology fellows.” Yet cardiology fellowship programs tend to be just 15% to 20% women.

“For the sake of the profession, we need to make sure we are tapping into all the talent we possibly can and that we are not in some way excluding people who could potentially contribute greatly to who we are and how we care for patients, as well as the kinds of discoveries they could be making and the value that brings.”

Commenting on the study for TCTMD by email, Rita Redberg, MD, MSc, of University of California, San Francisco, observed that the study offers both good news and bad.

“First, that 21% of all recent first-year cardiology fellows and 12% of the current workforce are women is great. For many years—when I started the Women in Cardiology committee for the AHA in 1994—that percentage remained stubbornly at 5%. And overall with more people working less than full time, it suggests men and women are seeing more flexibility and hopefully are better able to balance their individual needs.”

That said, continued Redberg, “it is disappointing that even with adjustment for different practice activities, women are consistently earning less than men in cardiology. Clearly, there is no justification for lower salaries for women. So while clearly progress has been made, especially in terms of attracting more women to cardiology, to continue to achieve progress we need to address and correct these salary gaps.”

Female Interventionalists Remain a Rarity in the United States