Following Takotsubo, Men Have Worse Outcomes, Are More Likely to Die Than Women

The registry data should spur clinicians to be on the lookout for Takotsubo in men, even if women are more commonly affected.

Men are less likely than women to experience Takotsubo cardiomyopathy—also known as broken heart syndrome—but experience worse outcomes when they do, according to new European data.

Because it has been long known that males make up only about 10% of cases of Takotsubo—when, in response to an emotional or physical trigger, the heart balloons to a shape similar to that of the so-named Japanese octopus trap—physicians might not be as readily on the lookout for it or take it as seriously in this population, senior author Francesco Santoro, MD, PhD (University of Foggia, Italy), told TCTMD. 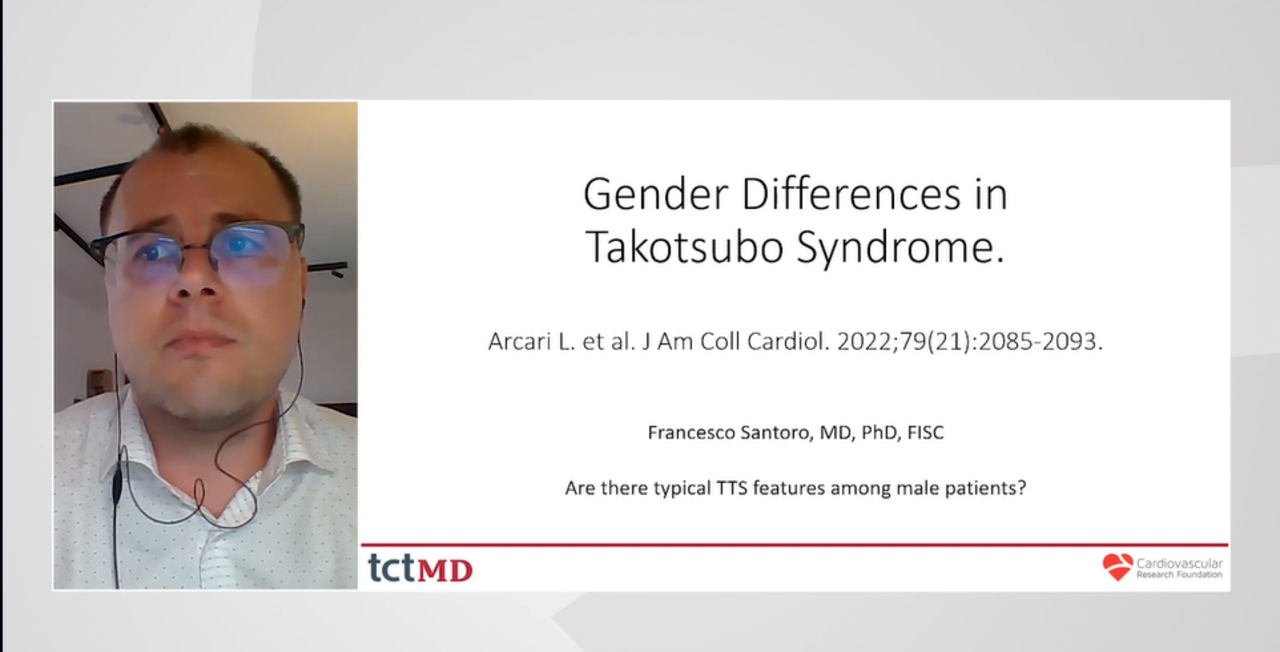 “Male patients can have Takotsubo, and if they have it, they have a very high risk of long-term MACE,” he said, adding that these patients should have aggressive follow-up in the first few months following the event and then every 6 months thereafter.

Santoro said he expected to see males have worse outcomes than women because it reflects what he’s seen in his practice, but it was surprising to see that they only have worse mortality outcomes in the acute phase. “What surprises you in Takotsubo is that when you think that never happens, it happens,” he said. “So you never think that you would get a male patient with Takotsubo, but then you find it and this patient can have a worse outcome, so you should pay more attention [and] you should provide him a strict follow-up at least 6 weeks to 2 months after the discharge and then every 6 months.”

As to the reasons behind the findings, Santoro said males are more likely to have physical triggers, “which can be a surgery [or] sepsis, [so] they have a higher surge of catecholamine and this may be the driver of outcomes.”

Because long-term mortality doesn’t seem to be affected by sex, this “suggests that once left ventricular systolic function recovers, which typically occurs within days to weeks of initial presentation, long-term mortality in Takotsubo syndrome is driven primarily by noncardiac comorbidities and events,” writes Ilan Wittstein, MD (Johns Hopkins University School of Medicine, Baltimore, MD), in an accompanying editorial.

The study’s “observations may seem paradoxical at first, [but] they may actually provide important clues about the pathophysiologic mechanisms of this disorder,” he continues. “There is increasing evidence that the transient myocardial dysfunction observed in Takotsubo syndrome is the result of sympathetically mediated microvascular ischemia.”

Commenting on the study for TCTMD, Scott Sharkey, MD (Minneapolis Heart Institute, MN), hypothesized that “there's something about the autonomic nervous system control mechanism that's different between the two sexes,” he said. “The whole gender thing is fascinating to me just as to why it would be that way. Why would a woman's heart be much more susceptible to this than a man's heart? Why is it that men can still get it, obviously, but it takes a much greater stress to provoke it?”

Needless to say, much work remains to investigate these questions as well as those about racial and ethnic differences in Takotsubo syndrome, especially in African American and Latino communities, Sharkey said.

Santoro would also like to see additional research focusing “more on pharmacological treatment, because we really don't know exactly what is the best strategy,” he said. “We will focus on all kinds of heart failure therapies and see which is the best for these patients. There are still no randomized trials.”

Sharkey said he would like more information in this space as well because “we don't have any pharmacological means that is effective at preventing a first occurrence or a recurrence of this.” He added that he is currently treating two women who have each had six occurrences of Takotsubo, “and I’ve tried everything, including combining ACE inhibitor, beta-blocker, calcium channel blocker, and even antidepressant/antianxiety drugs that might modulate the central nervous system. It hasn't stopped it.”

Also, more work should be done looking at how the magnitude of physical stressor—as the present study only included presence and type—and catecholamine use might affect outcomes.

Following the sudden death of Joe Garcia days after his wife Irma Garcia was killed in the school shooting in Uvalde, Texas, last month, broken heart syndrome has again entered the news cycle. While it hasn’t yet been confirmed that Takotsubo was the cause of death, it’s a possibility, according to Sharkey.

“My guess would have been that he had a coronary event, not a Takotsubo,” he said. “The coronary event may well have been attributed to this terrible, terrible stress, but the stress can do more than just trigger Takotsubo. . . . But [it's a] particularly poignant moment in that way.”

However, following a large-scale tragic event like a mass shooting or even an earthquake, it’s likely that “there would be a substantial number of women who come down with the broken heart syndrome,” Sharkey said.

But that doesn’t mean hospitals should be on alert for this in those circumstances. Following the murder of George Floyd in Minneapolis, MN, in June 2020, Sharkey said they expected to see a surge in Takotsubo cases, but their registry didn’t show that. “It's just such a low incidence that you can't make the case to say, ‘Okay, we're on high alert for Takotsubo,’” he said. “And the other thing is: plain old atherosclerotic heart attacks are often triggered by stress also.”

Approach to the Diagnosis and Treatment of Takotsubo Syndrome: The New ESC Consensus Document