Researchers say their study should be a wake-up call, particularly since fitness is one of best predictors of CVD events and mortality. 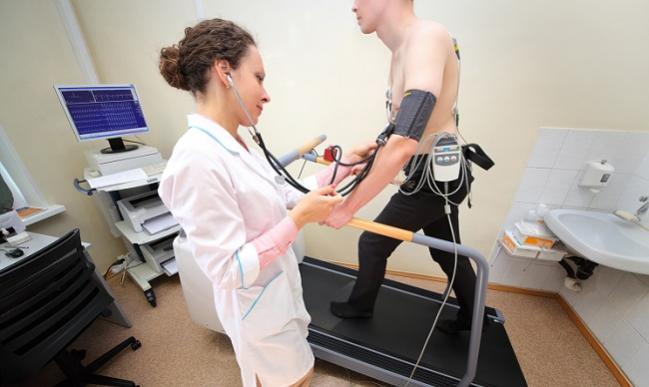 The study also showed that the decline in fitness over time was consistent across all age groups.

“It should be a little bit of a wake-up call,” Brian Andonian, MD (Duke University Medical Center, Durham, NC), one of the study authors, told TCTMD. “There are a lot of medications to prevent and treat cardiovascular disease, but at the same time, fitness is one of the best predictors of future cardiovascular events and mortality. This should really highlight that we should be increasing physical activity and increasing fitness in our patients.”

The study, which was published January 16, 2019, in the American Heart Journal, assessed all available exercise treadmill tests performed at Duke University Medical Center from 1970 to 2012. To TCTMD, Andonian said their group also wanted to identify trends in the use of exercise treadmill testing over time because their perception, prior to the analysis, was that use of other noninvasive stress imaging studies may have led to the decreased use of treadmill testing. The researchers note that for patients who can exercise, ambulatory exercise stress testing is a class I recommendation over pharmacologic stress testing (class IIa recommendation).

Across the years, 46,022 patients underwent exercise treadmill testing, with the Bruce protocol most frequently utilized (62.7%). When investigators compared two periods—1990-1999 versus 2000-2009—exercise testing of all types declined by approximately 10%.

Fitness is one of the best predictors of future cardiovascular events and mortality. Brian Andonian

“We can’t comment on the exact reasons, but we think it probably has to do with a lot of things, like the increased use of other modalities, such as those that are more imaging-based or nuclear stress testing,” said Andonian. “The other question we had was if less people are using the treadmill as a test, it might be due to some of the other clinical factors we found, like the increase in obesity and metabolic syndrome in general. If people are unable to exercise, or the perception was they were unable to do a maximal test on the treadmill, they might be referred to a different modality.”

Among the 28,875 patients referred for Bruce-protocol exercise treadmill testing, individuals tested between 2010-2012 had less ischemic heart disease and were less likely to smoke than those referred for testing in 1970-1979. However, as Andonian noted, patients referred for exercise testing had a gradually increasing prevalence of congestive heart failure, diabetes, hypertension, and hyperlipidemia over the four decades. Moreover, the mean body weight was 81.7 kg in 1970 but 89.7 kg in 2012. Mean body mass index also increased from 27.2 kg/m2 in 1970-1979 to 30.2 kg/m2 in 2010-2012.

Among those undergoing Bruce-protocol exercise testing, cardiorespiratory declined from 11.7 METs in 1970-1979 to 10.5 METs in 2010-2012, a decline that was observed across all age groups with the exception of those younger than 20 years and some of the older patients. For example, fitness levels were relatively constant in those aged 60-69 years and were higher over time in those aged 70-79 years.

To TCTMD, Andonian said one of the limitations of their analysis is that it’s a single-center study, but it appears to confirm the perception that “we’re getting less fit as a population.” Still, it is difficult to determine if individuals are less active today than in 1970 because studies are complicated by self-reporting and/or use of questionnaires. “We get at it a little bit here,” he said. “There seems to a decrease in fitness and that could mean there’s less physical activity in the population, which should be alarming to most physicians, especially cardiologists.”

Sex Disparities Seen in China for Patients With ACS

Higher Fitness Again Tied to a Lower Risk of Death, Including CVD Mortality