More is not always better in antithrombotic treatment, one expert says. 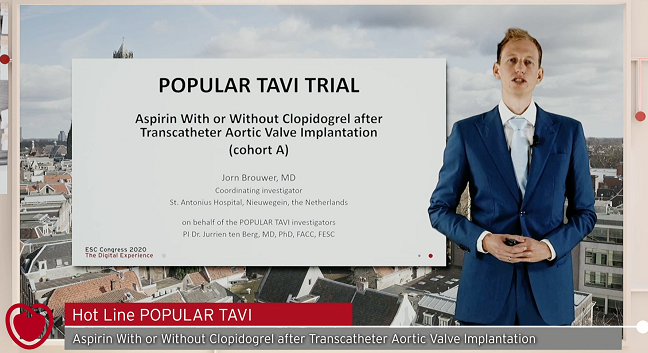 After TAVR, patients who do not have an indication for oral anticoagulation fare better with aspirin alone than with dual antiplatelet therapy, the POPular TAVI trial shows.

Patients treated with aspirin monotherapy rather than aspirin plus 3 months of clopidogrel had much lower rates of bleeding without an increase in thromboembolic events, Jorn Brouwer, MD (St. Antonius Hospital, Nieuwegein, the Netherlands), reported during the virtual European Society of Cardiology Congress 2020.

He explained that the optimal post-TAVR antithrombotic strategy has not been established. European guidelines recommend aspirin plus clopidogrel early after the procedure—and a single antiplatelet thereafter—for patients without an indication for oral anticoagulation based on the coronary stenting literature. Patients undergoing TAVR, however, have a greater risk of bleeding compared with stenting patients due to older age, a heavier comorbidity burden, and use of large-bore catheters, he noted.

These findings from POPular TAVI, published simultaneously online in the New England Journal of Medicine, indicate that “physicians can easily and safely reduce the rate of bleeding by omitting clopidogrel after TAVI,” Brouwer said during a press conference. “And the take-home message is: aspirin alone should be used in patients undergoing TAVI who are not on oral anticoagulation and have not recently undergone coronary stenting.”

Answering questions for the press, Jurriën ten Berg, MD, PhD (St. Antonius Hospital), principal investigator for the trial, noted that there were two cohorts in POPular TAVI. In the group of patients who had an indication for oral anticoagulation (cohort B), the investigators had previously shown that adding clopidogrel to anticoagulation increased bleeding without a clear benefit in terms of reducing ischemic events.

“It might come as a surprise that we didn’t have any randomized data on the optimal treatment, so the guidelines are just based on expert opinion,” ten Berg said. “These two cohorts definitely show that aspirin alone or oral anticoagulation alone should be used in these patients.”

As for what impact there might be on guidelines due to these data from patients without an indication for anticoagulation (cohort A), ten Berg said: “I think it’s going to change because it definitely shows that it is safer to use aspirin alone and it doesn’t come with an increase of thrombotic events, so it’s also effective to use aspirin alone.”

In cohort A of the trial, which was conducted at 17 European centers, 665 patients (mean age 80 years; 48.7% women) who did not require anticoagulation were randomized to aspirin alone or to aspirin plus 3 months of clopidogrel (followed by aspirin alone). The doses were 80 to 100 mg daily for aspirin and 75 mg daily for clopidogrel. Follow-up lasted 1 year.

There were two primary outcomes, both of which favored aspirin alone:

Procedure-related bleeding was defined as BARC type 4 severe bleeding only, so most of the bleeding that occurred at the TAVR access site fell into the non-procedure-related category. Among patients who bled, the access site was the location of bleeding in 58.0% of those treated with aspirin alone and 53.9% of those treated with aspirin plus clopidogrel. Only six patients, all in the aspirin plus clopidogrel group, had a BARC type 4 bleed.

“Although there were no signs of a numerically higher incidence of thromboembolic events with aspirin alone than with aspirin plus clopidogrel, no clinical inferences should be drawn from these data,” Brouwer et al write in their paper, noting that the trial was not powered to look at differences in these endpoints.

After Brouwer’s presentation, ten Berg was asked about an apparent catch-up in death, stroke, and MI in the aspirin monotherapy arm. He acknowledged that there might be some benefit of clopidogrel early after TAVR but said it was likely small. “I think that the catch-up is not as important as the bleedings we inflict with dual antiplatelet therapy. So in the end, the conclusion stays the same: do not use clopidogrel in these patients,” he said.

‘More Is Not Always Better’

Commenting for TCTMD, Mary Cushman, MD (University of Vermont, Burlington), said via email she was “really excited to see a cardiology trial that focused on bleeding as the primary endpoint. Abnormal bleeding often has more morbidity associated with it than ischemic outcomes might.” She contrasted a major GI bleed that requires hospitalization, transfusion, and endoscopy with an NSTEMI that requires a short hospital stay and a small adjustment in medications. “Even minor bleeding can be very bothersome to patients,” she added.

It’s not surprising, said Cushman, an American Heart Association spokesperson, that bleeding would be reduced by using aspirin alone rather than dual antiplatelet therapy. “This would be expected, especially in an older population, such as that which would be receiving TAVI (mean age in this study was 80),” she explained.

The US guidelines state that adding clopidogrel to aspirin after TAVR may be reasonable, “which means that the recommendation is weak and based on unclear evidence,” Cushman said. “In these cases the recommendation is often based on expert opinion and studies that have limitations of design. As such, given the findings of this new study, guideline makers will need to synthesize results in context of those studies to update them.”

Moreover, POPular TAVI might help guide treatment decisions by physicians and patients, she suggested. “Is an expected tiny difference in a thrombotic outcome worth that added risk of bleeding and expense?” she wrote. “The authors of the POPular TAVI trial reported they collected quality-of-life data, so future analysis of that would be helpful to physicians and patients to inform decision-making on this topic.”

What Cushman takes away from the trial’s results is that “more is not always better in antithrombotic treatment.”

In addition, there are implications for future research, she indicated. “In the current era where we have excellent treatments for patients with thrombotic conditions (everything from stroke to MI to venous thromboembolism or valvular heart disease), we need to increasingly consider the burden of bleeding on the well-being and quality of life of patients, and reconsider how we conduct future trials,” she said. “In this setting of excellent secondary prevention, an emphasis on studying the impact of treatments on death and disabling outcomes (like disabling stroke or intracerebral hemorrhage) will become much more important to consider in large trials.”