Hybrid Revascularization for Multivessel CAD Rarely Used in the US

Future uptake will depend on how technology progresses and whether studies show good mid- to long-term outcomes. 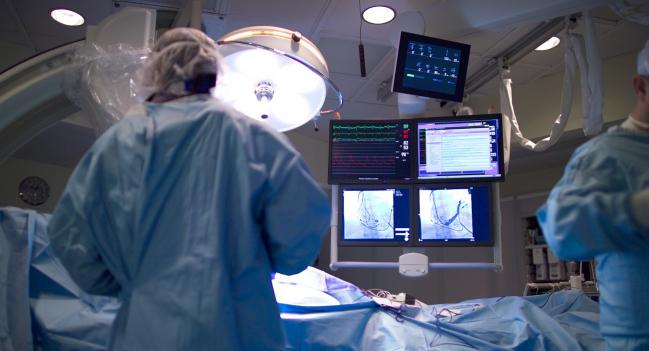 Hybrid revascularization is struggling to find a role for the treatment of multivessel CAD in the United States, according to a snapshot of registry data looking at the use of this approach and outcomes.

Though slightly more than half of hospitals performed at least one hybrid revascularization during the study period, the vast majority (97.3%) averaged less than one a year, with none performing more than six a year, according to a study published online June 28, 2019, ahead of print in the American Heart Journal.

The idea of using a combined approach pulling in both CABG and PCI for patients with multivessel disease was first described in 1996, Lowenstern and colleagues note. “Hybrid coronary revascularization was intended to incorporate the principal benefits of both procedures, specifically decreasing the risk of surgery by utilizing a limited left thoracotomy approach for durable anterior wall revascularization, with a left internal mammary artery graft, while treating disease in other coronary territories with PC,” they explain.

There are some small studies comparing the hybrid approach with CABG alone, with one recent meta-analysis showing similar risks of major adverse outcomes with either strategy, but there are limited data comparing hybrid revascularization with multivessel PCI.

To look at current use of the combined approach, the investigators turned to the National Cardiovascular Data Registry (NCDR) CathPCI registry, identifying nearly 1.6 million patients with multivessel CAD who were treated at 711 centers between July 2009 and March 2017. They zeroed in on the patients for whom hybrid revascularization might be an option by excluding those with STEMI, emergency/salvage revascularization, another major surgery during the same hospitalization, PCI without stent placement, or prior CABG. That left 775,000 patients, who were mostly treated with single-vessel PCI (66.6%), followed by multivessel PCI (33.1%) and hybrid revascularization (0.2%).

Of the patients who underwent a hybrid approach, most (68.7%) had CABG performed after PCI, with nearly all of the rest undergoing PCI after CABG; a median time of 3 days separated procedures in both groups. Patients who had PCI after CABG were more likely to receive P2Y12 inhibitors at discharge (96.8% vs 79.4%).

Compared with patients treated with multivessel PCI, those who underwent both CABG and PCI were younger on average, less likely to have a history of prior MI or PCI, and more likely to have significant left main or proximal LAD disease. They were also more likely to present with ACS, to have cardiogenic shock at the start of PCI, and to receive support from an intra-aortic balloon pump. Despite that, hybrid patients were less likely to receive P2Y12 inhibitors at discharge.

That last finding, which can be explained “either as an error of omission or as a consequence of avoidance of post-CABG bleeding,” Lowenstern and colleagues write, “is concerning because of the potential for subsequent stent thrombosis in the absence of dual antiplatelet therapy. Going forward, strategies to address this omission will be important to optimize the secondary prevention of cardiovascular events and potentially reduce admissions and improve outcomes in this patient population.”

Looking within the hybrid revascularization group, patients who underwent PCI before versus after CABG had higher risks of periprocedural MI (3.9% vs 1.2%), heart failure (3.9% vs 1.5%), and bleeding (6.6% vs 1.5%), as well as a longer hospital length of stay (median 10.0 vs 8.0 days). In-hospital mortality and the likelihood of being discharged to home did not differ.

Commenting for TCTMD, cardiac surgeon Faisal Bakaeen, MD (Cleveland Clinic, OH), agreed with Lowenstern that the lack of data—particularly on mid- and long-term outcomes in comparison with other approaches—has caused a reluctance among physicians to use the hybrid approach. Future uptake will depend on getting those data and on continuing advancements in both surgical and stenting techniques, he said, noting that the revascularization component of “overwhelming advantage” is delivery of the left internal thoracic artery (LITA) to the left anterior descending (LAD) artery.

“I see a role in the future as the technology of stenting gets better, as surgical techniques evolve, and as more surgeons become comfortable and skilled at delivering an excellent LITA to LAD through a minimally invasive approach without using the heart-lung machine,” Bakaeen said, calling the hybrid strategy “a revascularization modality that is in its infancy.”

“Additional work is needed to clarify the patients who would benefit most from hybrid revascularization (as compared with CABG or multivessel PCI) and to improve the postprocedural medication management of these complex patients,” Lowenstern said.

She and her colleagues note in their paper that there was an ongoing trial that set out to randomize nearly 2,400 patients to hybrid revascularization or multivessel PCI, with a planned 5-year follow-up.

However, one of the principal investigators of that trial, Gregg Stone, MD (NewYork-Presbyterian/Columbia University Irving Medical Center, New York, NY), confirmed to TCTMD that the trial was stopped early after only 200 patients were randomized, due to slow enrollment.

Lack of Standardized Definition of Hybrid

Speaking with TCTMD, interventional cardiologist Ashish Pershad, MD (Banner - University Medicine Heart Institute, Phoenix, AZ), said that not much should be made about this kind of comparison between hybrid revascularization and multivessel PCI, pointing to limitations inherent to all observational studies.

The more important takeaway is the snapshot provided by this paper as to where the hybrid strategy stands in the US, Pershad said. “It brings home the point that few people are getting this approach,” he said. That’s not particularly surprising for several reasons, he added, citing limited data; questions about the practicality and timing of treating additional vessels in the same hospitalization and about management of dual antiplatelet therapy; and the fact that many surgeons still perform CABG using full sternotomies, which makes cardiologists reluctant to refer patients.

Pershad also raised the issue of experience when considering that no hospital in the study did more than six hybrid revascularizations per year. “If you do one case every 2 months, there’s no way you’re going to get any kind of expertise in doing this kind of work because it’s still a skillful operation that requires technical expertise,” he said.

He said what struck him most, however, was that there is still no standardized definition of what hybrid revascularization actually entails, an issue also brought up by Bakaeen.

Bakaeen said the definition of hybrid is loose and can incorporate at least three separate groups:

“The importance of differentiating between the three groups above is particularly important,” Bakaeen said. “Group one includes the kind of cases that are discussed and agreed upon for a hybrid approach a priori by the heart team, while the other two groups are more of post hoc treatment pathway cases. Group one CABGs are likely to be single-vessel LITA to LAD that are more likely to be performed off-pump and perhaps via a mini thoracotomy or robotic approach. In contrast, CABGs in the other groups are likely to be multivessel bypasses performed on-pump via a full sternotomy.”

Thus, he said, “it would have been very informative to link the NCDR with a surgical database to differentiate between the groups and investigate associated outcomes. Other useful data would be the percentage of patients with multivessel CAD who undergo CABG (nonhybrid) and their outcomes.”