In the IMPERIAL trial, primary patency assessed by duplex ultrasound was 86.8% with Eluvia and 81.5% with Zilver PTX, a difference that met criteria for noninferiority (the primary endpoint) and for superiority, a prespecified, post hoc analysis, William Gray, MD (Lankenau Heart Institute, Wynnewood, PA), reported here at TCT 2018.

Both stents boosted symptomatic, functional, and hemodynamic outcomes through 1 year.

“Here’s the data we’ve all been asking for, a head-to-head trial,” Gray told TCTMD. “The trial showed superiority of one device over another. It now brings into play a significant and strong competitor in the marketplace for antiproliferative therapy in SFA [superficial femoral artery] intervention and lines up nicely with the current choices of DCB [drug-coated balloon] and Zilver DES. That is, I think it’s favorably compared to those other therapies.”

He added that he’d be “shocked” if the results—published simultaneously online in the Lancet—do not lead to US Food and Drug Administration (FDA) approval of Eluvia; the stent received CE mark approval in Europe in February 2016.

Choice of stent is complex, Gray said, taking into account numerous factors, including the required stent length, prior treatments, and cost. Assuming FDA approval, he said, “My preferred stent after this trial, based on patency alone, would absolutely be the Eluvia, but I acknowledge that there are other factors that people might use to choose something different.”

Commenting for TCTMD, Mehdi Shishehbor, DO, PhD (University Hospitals Cleveland Medical Center, OH), agreed that IMPERIAL will lead to US approval of Eluvia. “I think that this is a technology that needs to be approved and most likely will replace the Zilver PTX given these data,” he said.

Although physicians typically like to see multiple trials before making major changes to practice, the endovascular field has been less replete with good head-to-head comparisons of devices when compared with cardiology. “The fact that we have a well-powered trial that compares two devices in the same class and shows one is superior to the other to me, I think, is enough justification for us to use the better device,” Shishehbor said. “At least at this moment, I don’t know how to make a justification to use the inferior device given these data.”

But Gary Ansel, MD (OhioHealth/Riverside Methodist Hospital, Columbus, OH), wasn’t ready to write off Zilver PTX just yet, pointing out that there are long-term data available for the device. “We have 5-year results on Zilver PTX and they’re very good, so until somebody can replicate that 5-year result there’s still a little bit of discussion as to what the competition is,” he told TCTMD. He noted, too, that a prior trial of DES in superficial femoral artery disease, SIROCCO, had good 1-year results that didn’t hold up over longer-term follow-up.

That said, Ansel concurred that the results are good enough to support FDA approval.

Prior studies have shown that both DES and DCB improve patency and reduce reintervention rates when compared with older endovascular therapies in femoropopliteal disease, but comparative studies have typically pitted the treatments against plain balloon angioplasty. There have been no randomized head-to-head comparisons of therapies from the same class in SFA.

That makes IMPERIAL unique in that it compared two paclitaxel-eluting stents, one with a polymer coating (Eluvia) and one without (Zilver PTX). The trial, performed at 65 centers in the United States, Canada, New Zealand, Belgium, Germany, Austria, and Japan, randomized 465 patients with native SFA or proximal popliteal artery lesions with stenosis of at least 70% by visual angiographic assessment 2:1 to Eluvia or Zilver PTX.

Regarding patency, Gray noted that absolute patency at 1 year approached 90%, “and in none of the other trials that we’ve seen has patency approached 90% in antiproliferative therapies, in DCB or other DES trials.”

When asked why Eluvia would provide better results relative to Zilver PTX, Gray said that Eluvia was purpose-built for SFA interventions, whereas Zilver PTX was not as specifically directed toward the SFA. Also, the devices deliver paclitaxel in different ways: Zilver PTX releases the drug rapidly over the course of about 2 months and Eluvia, with its polymer coating, releases paclitaxel over the course of several months. It’s now known, Gray said, that SFA restenosis typically occurs in the latter part of the first year of follow-up, so Eluvia may be better positioned to deliver antiproliferative therapy at the critical time.

One finding from the trial that caused some discussion was positive remodeling, which was seen in six patients treated with Eluvia (2.1%). Gray reported that all six lesions were patent at 1 year and that none of the patients had TLR or stent thrombosis. 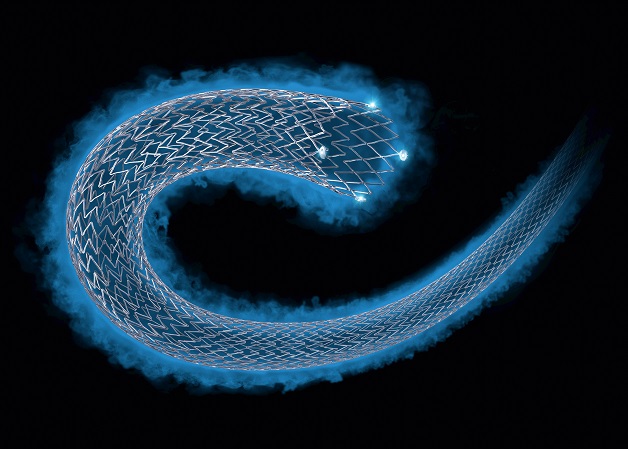 Shishehbor noted that this has been observed with DCB but not with Zilver PTX. And there is some question about whether the finding is a good thing or a bad thing, he said. It could be a positive sign if it means the drug is able to shrink the plaque and prevent scar tissue formation and restenosis. On the other hand, it could lead to aneurysm or clot formation.

That said, “the fact that they actually had less stent thrombosis [with Eluvia] tells me that it’s a positive thing, it’s a good thing,” Shishehbor stated.

Ansel was more circumspect: “Whether this is a potential sign of early aneurysm formation, we don’t know.” Longer follow-up is needed to see whether this is a concern, he said, adding, however, that the 1-year data did not raise any major safety concerns.

Gray pointed out that the rate of positive remodeling was low, and said these patients will be followed prospectively at 24 months and 36 months, which will provide more information about the significance of the finding. He added, however, that he takes comfort from the lack of safety issues observed in these patients.

With largely positive results, the IMPERIAL trial is likely to have an impact not only on the choice of DES in the periphery but on the decision about whether to use DES or DCB.

“If I think that a patient’s going to need a stent anyway, I may just move quickly to the stented strategy,” Gray said. “Many doctors will do it for ease of use and simplicity of application. That is, they don’t want to have to use two or three DCBs because it takes longer and they have to do some nuanced assessment of whether the patient needs a stent. They may just be happy with the patency rate of Eluvia and the quick application of the technology. I think it’s going to depend on the doctor and the patient to make those choices.”

Shishehbor said the trial is exciting because it introduces another drug-eluting technology into the armamentarium of US physicians treating peripheral disease (assuming FDA approval)—joining Zilver PTX and three drug-coated balloons.

Five to 7 years ago, he said, stenting was popular in the endovascular field, with the pendulum swinging toward DCB with or without atherectomy in more recent years. IMPERIAL might cause the pendulum to swing back toward stenting a bit, he said.

Because the femoropopliteal artery is so long and peripheral disease is so heterogeneous, he said, it’s unrealistic to expect to only need one device; operators may need to use three or four devices to treat a patient. The goal moving forward should be to define which patients are best suited to each specific technology, he said.

“There is no technology that can address all of our needs. I think this data is encouraging and I think Eluvia would be a good complement to DCB and the current drug-elution therapies that we have available,” Shishehbor said, adding that “in 2018, most likely no patient should be treated for femoropopliteal disease without some kind of drug-elution therapy, either DCB or DES.”

Ansel looked forward to continuing advancements in stent technology. “These are positive findings, and it allows us to continue to look at drug-coated stents like we look in the coronaries and say, ‘Can we improve on this? Can we use these in longer lesions? How do we build on these results?’ And technology will continue to improve,” he said.

IMPERIAL: A Randomized Trial of Drug-Eluting Stents for Treatment of Femoropopliteal Artery Lesions