One physician says it may be time to unionize. Another warns that while lost sleep may not affect hard outcomes, it raises the risk of errors and accidents. 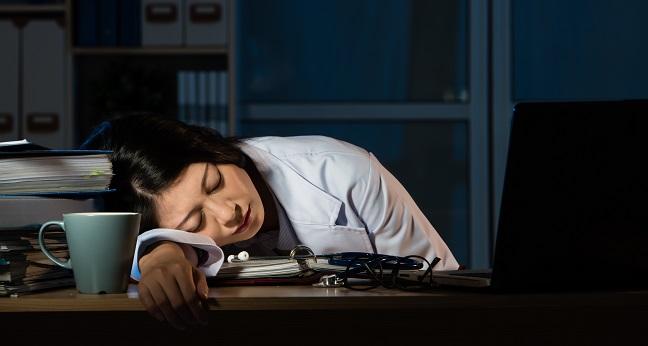 During a special session on cath-lab safety, Lloyd W. Klein, MD (Rush University Medical College, Chicago, IL), argued that major changes designed to improve operator health in the cath lab have been woefully lacking. Drastic change is unlikely, he said, due to management strategies that aim to “hire the best and the brightest, pay them the lowest competitive wage, work them hard, and then when they expect more, replace them with the next generation.” As such, investing money to protect interventionalists is not cost-effective, he maintained.

Klein said young cardiologists may not fully understand the repercussions of their job choice, and may either deny their personal risk or be afraid to complain.

“Seventy percent of cardiologists now are contracted,” he added. “The day of the independent cardiologist is coming to an end. And that means if we want to respond to management and make changes . . . we’re going to have to unionize,” Klein said. He added that while that statement may be perceived as merely provocative, workers in other industries have had occupational changes and safeguards instituted that would not have been corrected if it were not for pressure from unions.

In a separate presentation, Yader Sandoval, MD (Mayo Clinic, La Crosse, WI), said some changes need to come from within the culture of interventional cardiology itself.

He presented data from a recent multidisciplinary survey of 481 physicians, of whom 70% were interventional cardiologists. One-third admitted sleeping 6 hours or less during non-call days, and approximately 85% said they slept 6 hours or less during call days. Nearly half acknowledged that their work performance was affected by insufficient sleep, and 9% said they had experienced a patient-related adverse event related to sleep deprivation or had had a personal issue (ie, car accidents or sticking themselves with needles). Data from the survey, which was recently presented as an abstract, are currently under review for publication.

“We need more awareness and more education that this is a problem,” said Sandoval. “If one of our partners was awake all night doing some complex cases [we need to be able to say], ‘I’ll take care of the rest of the cases, go home,’ and so on.”

Although no mandate exists for physicians to let their patients know if they are sleep deprived, Sandoval said the Sleep Research Society has recommended, as part of proposed “safe work hours” legislation, that physicians who have been awake for 22 of the prior 24 hours inform patients of the potential safety impact of their sleep deprivation and obtain informed consent.

To TCTMD, Klein agreed that full disclosure “is the only way to go with patients, so absolutely we should be telling them.” Asked if he thought many physicians do tell their patients about their sleep deprivation, he added, “I hope so.”

Following the session, TCTMD ran a Twitter poll questioning physicians on this issue. An overwhelming majority (87%) said they never tell their patients if they are sleep deprived.

Interventional cardiologists: if you’ve been awake >22 of 24 hours, do you inform patients of your sleep deprivation? #SCAI2018 #CathLabBootCamp @lamckeown1

In an interview with TCTMD to discuss the poll, Sandoval said a similar question was asked in his group’s unpublished survey, which was whether clinicians who had not slept for more than 22 of the prior 24 hours thought that their sleep deprivation should be disclosed. Their results, he observed, were essentially split down the middle, with 47.8% feeling it was necessary to tell patients and 52.2% saying it was not.

One possible explanation for the TCTMD survey results could be that operators are handling these issues amongst themselves and taking over for each other when a colleague is tired, as Sandoval urged doing.

“For major hard endpoints and safety purposes, the studies that have been performed to-date have not shown that patient safety is jeopardized,” Sandoval noted.

In one study of over 5,000 operators, those who performed PCI the night before were no more likely than those who did not to have higher mortality or in-hospital bleeding in next-day cases. However, the same analysis showed that patients of operators who reported being chronically sleep deprived had higher rates of bleeding in their patients—a finding that Sandoval said needs verification in further studies.

He also showed data from a newly published study by investigators from the Minneapolis Heart Institute looking at sleep-deprived versus non-sleep-deprived operators who performed over 12,000 PCI cases between 2009 and 2016. Again, there were no differences between operators in technical or procedural success rates, bleeding, or mortality.

It’s like, ‘I was on call all night and did all these cases, and here I am the following day and I’m not saying anything.’ It’s ingrained in medicine, not only in cardiology, and we wear it as a badge of honor. Yader Sandoval

“However, I think it is fair to acknowledge that there are other softer endpoints that can potentially be affected that we are unable to capture in some of these larger, clinical studies,” Sandoval said. Some examples include longer procedure time, difficulty gaining access, delayed reaction time, and impaired interaction with cath lab team members. Lack of sleep also could potentially affect decision-making and lead to altered patient management plans, missed diagnoses, and problems with documentation, he noted.

“It has long been recognized that being sleep deprived is a badge of honor for physicians,” Sandoval told TCTMD. “It’s like, ‘I was on call all night and did all these cases, and here I am the following day and I’m not saying anything.’ It’s ingrained in medicine, not only in cardiology, and we wear it as a badge of honor.”

Moving forward, he said, more efforts should be made to create open dialogue about helping one another out if sleep deprivation is an issue that could affect how a case is performed. However, Sandoval also noted that in some situations, such as areas where there may be a very limited number of practicing interventional cardiologists, this could be challenging and a reason not to make disclosure of sleep deprivation mandatory.

More Back Problems Than General Population

Orthopedic issues are another area where not only is job performance being impacted, but careers are being cut short due to consistent patterns of daily injury in the cath lab, said Klein.

“I don’t know how many times I have strained to see around a fellow, over the nurse, around the IV tubing to see what is going on. You do that for the patient, but this is not a good thing for your back,” he said.

A survey of SCAI members in 2004 showed that spinal problems increased with increasing years postfellowship, with 42% of those who responded reporting spine problems; Klein noted this is substantially higher than would be expected in the general population. When the survey was repeated in 2014, “not only had it not gotten better, it probably was worse,” he observed. Half of all operators in 2014 reported sustaining at least one orthopedic injury, 7% had limited their case work, and 9% said their spine problems had caused them to miss work.

But panelist Neal S. Kleiman, MD (Methodist Hospital, Houston, TX), questioned where the evidence is to show that interventional cardiologists are more prone to back injuries than other people, noting that although he sustained such an injury himself, his physician told him it was most likely age-related.

“I think we have enough data to know that this is a problem, and I think we’ve known it for a long time,” Klein responded. He added that development of a best practices policy from collaborating groups such as SCAI and the American College of Cardiology would be a good first step in trying to get a definitive standard to protect interventional cardiologists from injury and illness.

Why Does My Back Hurt? Nonradiation Risks In The Lab