Proponents say transradial access PCI can be done in even the most challenging patients, arguing this group is most likely to benefit. 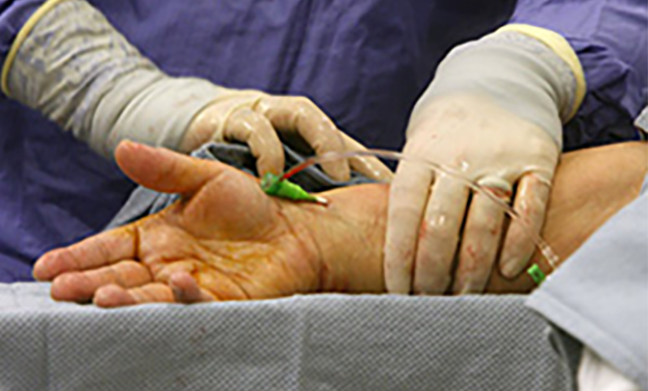 WASHINGTON, DC—In a wide-ranging session devoted to radial-access interventions, a panel of experts debated a number of hot topics, including the data supporting transradial access in patients with acute coronary syndrome as well as in complex cases, such as individuals with chronic total occlusions and calcified lesions.

For Davide Capodanno, MD (University of Catania, Italy), the body of evidence supporting radial access suggests considerable safety and efficacy in patients with ACS, but arguing about the relative merits of individual trials, such as MATRIX or RIVAL, “misses the forest for the trees,” he said. Still, he acknowledged the discussion has been heated over the years, with polarized opinions on both sides of the debate.

Capodanno spoke before a friendly audience at TCT 2016, however. In an informal poll before the start of the session, nearly all attendees stated they treat ACS patients via the radial artery. On a question about what to do when unable to complete the procedure from the radial route, the room was split on bailout approaches, with some switching to the opposite radial artery, others to the femoral artery, and a minority choosing the ulnar artery.

“With due respect to individual opinions, perhaps we all in this room agree, maybe, that radial access reduces access-site bleeding, makes you feel better when you stack antithrombotic drugs, particularly in the setting of acute coronary syndrome, and is by far preferred by the patient,” said Capodanno. “On the other side, perhaps we could also agree that radial access doesn’t fit 100% of the procedures, may be associated with longer procedural time and door-to-balloon time in STEMI, and is more demanding, requiring some degree of training.”

European and US Guidelines

In Europe, in centers experienced with radial access, the radial approach is a 1A recommendation for coronary angiography and PCI in NSTE ACS. In STEMI patients, radial access “should be preferred over femoral access,” if performed by an experienced operator. In the United States, the guidelines state that transradial access may decrease bleeding in STEMI patients and should be considered when feasible, but also that procedural success depends on operator experience.

To date, there have been 17 randomized trials of radial-vs-femoral access in ACS, including RIVAL and MATRIX, which together comprise 15,000 patients. In MATRIX, which included 8,404 patients randomized to radial- or femoral-access PCI, there was a trend toward reduced MACE at 30 days but the difference did not achieve statistical significance. Despite this, Capodanno, along with Giuseppe Andò (University of Messina, Italy), has published two recent meta-analyses: one showing transradial access was associated with a lower risk of access-site and major bleeding and another showing transradial PCI in ACS reduced the risk of all-cause mortality.

“When you perform multiple sensitivity analyses, the benefit in mortality remains,” said Capodanno. The reduction in all-cause death is evident when the results were stratified by multicenter trials, studies that include expert operators, only the most recent trials, and STEMI-only studies, for example.

Capodanno speculates that approximately 22,000 patients are needed to show a mortality benefit with radial-access PCI in ACS patients. Although a trial of this size will never be done, he noted that 18,958 patients have been included in various trials to date. After the completion of the SAFARI-STEMI study, which will randomize 4,884 patients with STEMI to radial-access or femoral-access PCI, there should be enough patients randomized and treated to answer the radial-vs-femoral PCI question as part of a larger meta-analysis, he said.

The Complex Case, Such as CTO

Despite making the case for transradial PCI in ACS, Capodanno said nonexpert radial operators should “remain in their comfort zone” when undertaking complex procedures, and that experts and nonexperts alike need to be ready to switch to the femoral artery if needed.

“You know, the evidence is clear,” he said. “You’ve already heard all the data showing that radial access is fantastic. It’s safer, it reduces mortality. . . . The question is whether we can do complex cases with radial access—I would say yes.”

Quesada cycled through numerous cases, including an 87-year-old patient with a heavily calcified ostial circumflex artery, one requiring rotablation, performed via the radial artery and aided by vascular ultrasound. Another case involved a 67-year-old patient with a prior coronary artery bypass graft and a chronic total occlusion of the circumflex artery. Both cases were completed successfully and without incident.

“In the CTO registry, all approaches were possible radially—antegrade wiring, antegrade dissection reentry, and retrograde techniques with the same success rate,” said Quesada. He admitted the volume of cases performed radially in CTO registry is smaller, with just 17% of CTO patients treated via radial access.

Not So Fast, Says One Expert

John Messenger, MD (University of Colorado, Aurora), took the “against” side of the debate, noting there are absolutely no randomized, clinical trial data to support transradial PCI in complex cases, such as CTOs, severe calcification and tortuous vessels, individuals with prior CABG, left-main interventions with bifurcated lesions, and coronary disease patients in cardiogenic shock requiring mechanical support.

“These are all the times when many of us in this room who are enthusiastic radial [operators] think about using the femoral artery,” he said. “Importantly, these are all the exclusion criteria from the randomized trials, making the observations from these trials difficult to translate into practice.”

Even in the randomized trials, crossover from transradial access to the femoral artery is not inconsequential—in RIVAL, it was 7.6%—and this suggests “we can’t do all the people we want to do currently in the trials with this technique,” said Messenger. In the RADIAL-CABG trial, a study of radial versus femoral PCI in patients with prior surgery, 17% of patients in the radial-access arm crossed over to femoral access, he noted.

Messenger said that complex PCI is even performed via the femoral artery in high-volume radial centers, and that registries fail to capture patient anatomy and other characteristics that influence the treatment approach, making them unreliable for comparisons.

Jennifer Tremmel, MD (Stanford University Medical Center, CA), however, said the reliance on the femoral artery for complex patients—a group that would paradoxically stand to benefit the most from transradial access—is largely a “mental” barrier for interventional cardiologists. “They just think, ‘This looks like it’s going to be difficult, I’m not going go radial.’ That’s some of it,” she said. “We might need to push ourselves a little when faced with this idea that we might do better with the groin.”

Like Tremmel, Mamas Mamas, BMBCh (University Hospital North Midlands, Stoke-on-Trent, England), noted that with the emergence of better technology, including sheathless guides, there is no reason why physicians can’t perform 7-Fr or 8-Fr sheathless transradial PCI. “Using the sheathless catheters, you can do all the complex cases you need to through the radial approach and these are exactly the cases we should be doing,” he commented.

Looking at the other side of the coin, Morton Kern, MD (University of California, Irvine), noted that operators tend to have higher complication rates when performing procedures in which they’re not comfortable, and for that reason he is reluctant to adopt an opinion pushing operators to go radial all the time.

Radial Artery Angiograms Save Time, May Reduce Complications in Radial PCI for STEMI