Statins appear to protect against adverse cardiovascular events in patients with elevated high-sensitivity C-reactive protein (CRP), even when their low-density lipoprotein (LDL) cholesterol levels are normal. These findings, from the JUPITER trial, were presented November 9, 2008, at the American Heart Association Scientific Sessions in New Orleans, and will appear in the November 20, 2008, issue of the New England Journal of Medicine.

In JUPITER (Justification for the Use of statins in Prevention: an Intervention Trial Evaluating Rosuvastatin), lead investigator Paul M. Ridker, MD, of Brigham and Women’s Hospital (Boston, MA), and colleagues randomized 17,802 men and women from 1,315 international sites to receive either 20 mg daily of rosuvastatin (Crestor, AstraZeneca, Wilmington, DE) or placebo. All enrollees had normal LDL levels, defined as <130 mg/dL, but elevated CRP levels, defined as ≥2.0 mg/L, and were otherwise healthy and free of inflammatory conditions.

At 12 months, the rosuvastatin group, compared with the placebo group, had a 50% lower median LDL cholesterol level and a 37% lower median CRP level, as well as a 17% lower median triglyceride level (P<0.001 for all 3 comparisons). These effects remained throughout the study. 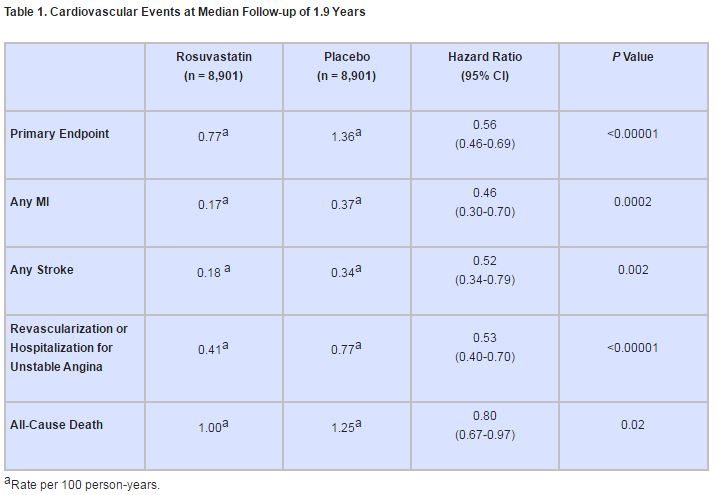 In subgroup analyses, results were similar, with no independent effects observed for subjects’ sex, race, traditional cardiovascular risk factors, or Framingham risk score. Adverse myopathic events were consistent across treatment arms, occurring in 10 subjects receiving rosuvastatin vs. 9 subjects receiving placebo (P = 0.82). Physician reports of diabetes were higher in the treatment arm (270 vs. 216, P = 0.01), which, the authors write, “could reflect the play of chance, [but] further study is needed before any causative effect can be established or refuted.”

Change in Practice? Not so Fast

Jeffrey W. Moses, MD, of Columbia University Medical Center (New York, NY) cited the importance of the concept behind the JUPITER findings. “If you’re at risk and certainly if you have [cardiovascular] disease,” Dr. Moses said, “whatever your cholesterol is, it’s too high. . . . If you have the prospect of disease with an inflammatory marker, you can get better by lowering your cholesterol. That’s an important principle.”

He stressed, however, that the results still need refinement before guidelines for statin therapy are expanded. “[Rosuvastatin] is mainly preventing a few strokes, a few heart attacks, so rather than spending hundreds of millions of dollars on Crestor for these people, why don’t we use this study to see if we could identify a more event-rich population?”

Though the trial was initially intended to follow patients for 4 years, the Independent Data and Safety Monitoring Board recommended early termination after a median follow-up time of just 2 years owing to the therapy’s demonstrated benefits and lack of adverse effects.

Dr. Moses questioned the early termination. “I think it was a mistake [to terminate it early],” he said, citing missed opportunities to refine risk profiles, as well as reveal or assuage issues of long-term safety.

In an editorial accompanying the JUPITER study, Mark A. Hlatky, MD, of Stanford University School of Medicine (Stanford, CA), concurs. “Long-term safety is clearly important in considering committing low-risk subjects without clinical disease to 20 years or more of drug treatment,” he writes.

Is Inflammation the Explanation?

The precise mechanism for the cardioprotective effect remains in question. In a prepared comment on the JUPITER results, AHA President Timothy Gardner, MD, observed, “Statins lower both LDL cholesterol and [CRP]. Thus, the findings . . . cannot determine whether lowering cholesterol, reducing inflammation, or a combination of both is responsible for the effects seen in this paper.”

But Dr. Moses was more certain. “It’s probably the lipid-lowering,” he said, “meaning that even at a [low] LDL level, the inflammation means you’re at some atherosclerotic risk, and you reduce [that risk] by lowering your LDL.”

Nonetheless, Dr. Ridker and colleagues see potential in further investigation of inflammatory pathways. “We hope the data presented here spur the further development of targeted anti-inflammatory drugs . . . and lead to innovative trials that can directly address whether the inhibition of inflammation by agents other than statins can reduce rates of vascular events,” they write.