A systolic blood pressure goal of less than 140 mm Hg is ideal for the majority of older patients with hypertension, one expert says. 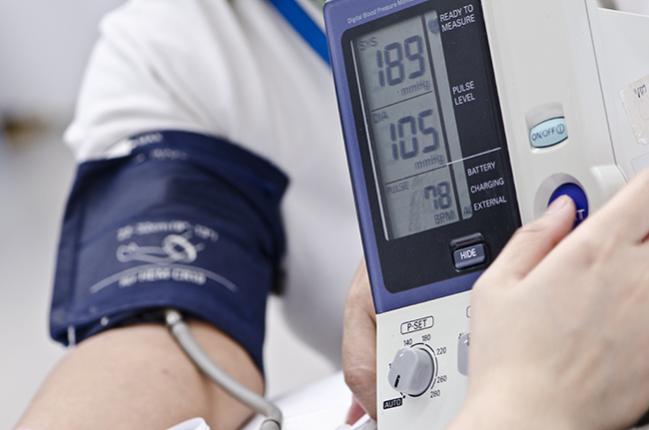 Intensive lowering of blood pressure (BP) improves most outcomes in older adults with hypertension, but that may come with a higher risk of renal failure, according to a new meta-analysis. More aggressive treatment in patients 65 years and older was associated with significant reductions in MACE, cardiovascular mortality, and heart failure compared with less-intensive approaches, report investigators.

Serious adverse events generally did not differ between strategies, although one analysis showed that the risk of kidney failure was twice as high with intensive therapy.

The study, led by Chirag Bavishi, MD (Mount Sinai St. Luke’s & Mount Sinai West Hospitals, New York, NY), and published in the February 7, 2017, issue of the Journal of the American College of Cardiology, adds fuel to the ongoing debate about ideal BP goals being had in the context of conflicting guidelines and new clinical trial results.

“Within the past 3 years, six sets of hypertension guidelines have surfaced, all composed by a different set of experts and providing different BP levels for initiating and targeting antihypertensive therapy, none having the seal of approval by the NHLBI [National Heart, Lung, and Blood Institute],” senior author Franz Messerli, MD (Mount Sinai Health Medical Center, New York, NY), told TCTMD in an email.  “Clearly this plethora must be . . . confusing for the practicing physician. Our study is not meant to add to the confusion but rather to emphasize that lowering BP to whatever limit comes at a cost.”

He added that the risks and benefits of lowering BP need to be considered for each patient and each target organ individually.

Asked about the ideal BP goal for older patients, Messerli said that a target systolic BP of less than 150 mm Hg in adults 60 years and older—as recommended recently by the American College of Physicians and the American Academy of Family Physicians and the 2013 panel appointed to the Eight Joint National Committee (JNC 8)—is unacceptable. A goal of less than 140 mm Hg “is a good ‘entry-level’ target in most patients,” he said, noting that BP can be gradually lowered even further with careful monitoring.

But there will not be a one-size-fits-all goal for older hypertensives, Messerli added. “Older adults represent an exceedingly heterogeneous population, ranging from healthy senior citizens who are running marathons to the very frail with Parkinson’s and orthostatic hypotension,” he said. “Regardless of how many more studies are done, there never will be, nor should there be, a uniform on-treatment BP goal for all older patients.”

The JNC 8 recommendations—which have not been endorsed by any major organizations—were controversial because they backed off the widely accepted systolic BP target of less than 140 mm Hg.

Brent Egan, MD (Medical University of South Carolina, Charleston), who was not involved in the current meta-analysis, pointed out to TCTMD that recommendations to treat to less than 140 mm Hg had not been backed by solid evidence and were derived primarily through expert consensus. That changed, however, with publication of results from the SPRINT trial, he said.

The trial showed that treating to a systolic goal of less than 120 mm Hg in nondiabetic patients at high risk for cardiovascular events reduced the rate of adverse clinical outcomes compared with treatment to a less-intensive goal of less than 140 mm Hg, at the cost of an increase in some adverse events. A subsequent prespecified subgroup analysis in patients 75 and older provided similar results.

SPRINT was “one study that was large enough and sufficiently rigorously conducted that I think it provided that evidence” for treatment to a goal of less than 140 mm Hg, Egan said. “I think the meta-analysis is basically consistent with the SPRINT study.”

In their meta-analysis, Bavishi and colleagues pooled results from four studies: JATOS, VALISH, the SPRINT study of older patients, and a Chinese trial of patients older than 70 years. There was a total of 10,857 patients followed for an average of 3.1 years. Not including SPRINT, intensive treatment targeted a systolic BP of less than 140 mm Hg and standard treatment aimed for a goal between 140 and either 149 or 159 mm Hg.

More aggressive treatment was associated with lower risks of the following outcomes:

There were no differences between groups for risks of MI or stroke, although both were numerically less frequent with intensive therapy.

The primary analysis did not reveal any differences in adverse events, but a fixed effects model showed an increase in renal failure with intensive treatment (RR 2.03; 95% CI 1.30-3.18).

As clinicians wait for comprehensive hypertension guidelines from the American College of Cardiology and the American Heart Association, they must decide how to decipher information coming from conflicting guidelines and recent trials.

“Almost every intervention has a potential downside.” Brent Egan.

Egan said that despite recommendations for pulling back from a target of less than 140 mm Hg in older patients, most physicians have maintained that approach. Even SPRINT, which seems to support lower targets, is consistent with a goal of less than 140 mm Hg because the way BP was measured during the trial probably led to readings substantially lower than those typically obtained in the clinic, he added.

Thus, less than 140 mm Hg is the ideal target for the majority of older patients with hypertension, Egan said. “That’s what the meta-analysis basically supports. That’s what SPRINT supported. So I think it’s a matter of clarifying a message that was created out of the controversy around that JNC 8 report.”

Egan stressed that adverse events are an important consideration when deciding how aggressively to treat hypertension, and said that is incumbent on the treating physician to make decisions for individual patients.

“It’s always a matter of weighing risk-benefit in that equation,” he said. “It’s a trade-off between more cardiovascular events and cardiovascular deaths if we don’t do it versus creating some other kinds of morbidities in the process. Almost every intervention has a potential downside.”

Regarding antihypertensive therapy, Messerli noted that many adverse events related to very low BP, “such as hypotension, dizziness, and a decrease in renal function, are reversible and can be recognized easily with proper monitoring. Of greater concern are hip fractures and syncope, which often occur without premonitory symptoms.”

Weighing in, George Bakris, MD (University of Chicago Medicine, IL), and Alexandros Briasoulis, MD (Mayo Clinic, Rochester, MN), say in an accompanying editorial that “we support lower pressures in older people who can tolerate them,” while emphasizing the need to carefully consider both risks and benefits.

Global Burden of Elevated Systolic Blood Pressure on the Rise