The small trial assessed iASDs at 1 month, leaving open a role for closure in longer-lasting shunts or other patient groups. 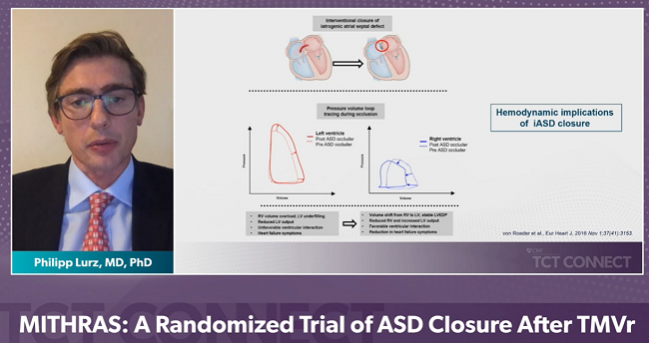 (UPDATED) For patients left with a persistent iatrogenic atrial septal defect (iASD) as a result of their transcatheter mitral valve procedure, taking the additional step of closing these defects does not seem to make a difference in patient recovery.

“Closure of an iASD 1-month post-transcatheter mitral valve repair was not superior to conservative treatment with regards to the primary endpoint [of] 6-minute walking distance, and the results are corroborated by no difference in secondary endpoints such as heart failure symptoms or hospitalization and survival,” Lurz said. “The presence of an iASD following transcatheter mitral valve interventions might be a prognostically relevant surrogate, but not necessarily causative for inferior outcomes.”

As Lurz explained during his presentation, transcatheter therapies for mitral regurgitation require transseptal access to the left atrium and in somewhere between 24% and 50% of patients, left atrial access leaves a persistent iASD. “These can be associated with left-to-right shunting associated with right heart volume overload with symptoms of right heart failure and, even in one report, an increased risk of mortality,” he said. On the other hand, he noted, there’s some evidence to suggest that the creation of such a defect is actually linked to improved hemodynamics and could potentially reduce left ventricular filling pressures—the strategy is actually being investigated as a heart failure therapy.

It was on the basis of this controversy and the “total lack of recommendations or guidelines” that MITHRAS was born, Lurz said.

Juan Granada, MD, CEO of the Cardiovascular Research Foundation (New York, NY)< and a TCT course director, stressed to the press that this has been an unanswered question amid an exploding field of mitral innovation. “I was very excited to see this presentation and I want to highlight the importance of this work, because . . . operators continue to cross the septum and do more and more procedures on the left side,” Granada noted. The question has persisted, he said: “Should we actually close all these defects if the operator believes they are hemodynamically significant? The problem is, that’s difficult to assess, difficult to determine, and sometimes it’s actually not really doable to bring the patient back once the patient is on a regular floor to close the ASD post-hoc. So this is a very important and relevant paper.”

MITHRAS was a single-center, unblinded, investigator-initiated trial that enrolled patients between January 2016 and October 2019 transcatheter mitral valve repair, which was the MitraClip (Abbott) in 95% of cases. Forty patients with a persistent iASD (defined as Qp:Qs ≥ 1.3 at 1 month after their mitral procedure) were randomized to closure using the Occlutech ASD occluder (Occlutech) and 40 to conservative medical management. For comparison, clinical outcomes were also tracked in a group of 235 patients who had undergone mitral valve interventions but had no significant iASD in the weeks following their procedures.

At 5 months, there was no between-group difference in change in 6-minute walk test, which improved nominally in both iASD groups. There were also no differences in the risk of mortality or rehospitalization between the two iASD groups at 1 year; however, rates for this combined endpoint were significantly higher in these two randomized cohorts as compared to the patients without relevant defects, mainly driven by a higher rate of heart failure hospitalization in patients with an iASD.

“Based on our results there is no support in the general recommendation to close these iASDs. I think you can use the data to make a strong argument to wait. Especially in patients who aren't symptomatic, then you can wait a bit longer and if they then develop severe right-sided volume overload then you can reassess them and probably decide on a patient-by-patient [basis],” Lurz said.

She pointed out that the study did not assess iASDs at the time of the MitraClip, but rather several weeks later, “so there’s some selection here—these patients had made it to 1 month already, so this doesn't apply as much to the patients with right-sided heart failure. Nor would it apply to patients with concomitant tricuspid regurgitation or to patients with a right-to-left shunt, Wang added. “That's where we need to make sure that the clinical cardiology community understands the implications of this and what population it applies to.”

Asked by Wang what type of heart failure drove the hospitalizations, Lurz said that it was a mix of left and right heart failure and this, he suggested, might be the most actionable finding from MITHRAS. “I think the presence and persistence of an iASD is a surrogate for higher left ventricular filling pressures, which, again, is more often seen in patients with reduced LV function,” he said, and that’s useful information. “I think if you see a persistent iASD that these patients might be high risk and might need closer follow-up and better surveillance after these transcatheter mitral valve therapies.”

Mayra Guerrero, MD (Mayo Clinic, Rochester, MN), who was the discussant following Lurz’s “Main Arena” presentation, said she “completely agreed” with his conclusion that an iASD likely is a marker of other worrisome pathology.

“LVEF was lower at baseline in patients who had persistent shunt at 1 month; similarly the left ventricular systolic volumes were greater and there was a greater proportion of patients with functional MR,” Guerrero said. “I suspect that patients who had persistent shunt at 1 month were just a sicker population with higher left atrial pressure, which is driving the patency of the iASD and also driving the size of the left to right shunt. So persistent iASD may be a marker of disease and not a cause.”

Having additional data on baseline left atrial pressures, she noted, might be a good way to identify patients who might also go on to develop an iASD.

Martin Leon, MD (NewYork-Presbyterian/Columbia University Irving Medical Center, New York, NY), one of the session chairs, called MITHRAS a “courageous” study that addresses a key clinical question: “I think this was meant to be a provocative, hypothesis-generating trial, to a certain extent, and I think it addresses an important issue, which is why I'm intrigued by your results and they will cause us all to think more carefully about when and if to close an iASD in the future.”

Clopidogrel Only Needed for 3 Months After ASD Closure: CANOA Analysis

Case #8: An Iatrogenic ASD During Transcatheter Mitral Valve Repair: When and Why to Close

Iatrogenic ASD After Transseptal Procedures: How to Assess, When to Close