Two-year results comparing a magnetically levitated LVAD to its predecessor should “open the door” to more patients getting a device, experts say. 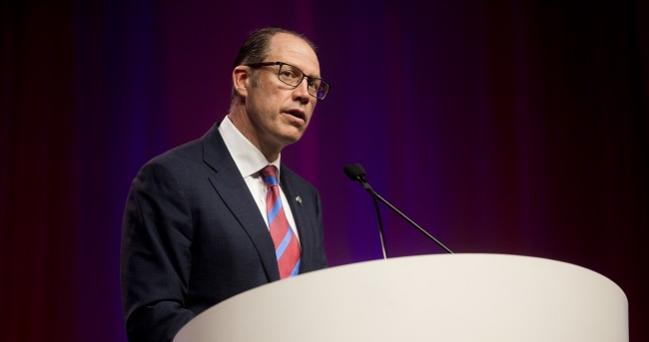 ORLANDO, FL—The latest-generation HeartMate left ventricular assist device has beat out its predecessor with results so promising that at least one observer is raising the question of whether it’s time for a trial comparing artificial pumps to heart transplantation.

At the very least, experts say, the new data prove that using a left ventricular assist device (LVAD) as destination therapy is a safe and durable option out to 2 years.

“The 2-year MOMENTUM 3 trial . . . demonstrates durability of the HeartMate 3 [left ventricular assist system] to optimally support patients who wait for extended periods for heart transplantation or are ineligible for heart transplantation,” said Joseph Cleveland, Jr, MD (University of Colorado School of Medicine, Denver), one of the study co-principal investigators, who presented the results during a late-breaking clinical trial session at the American College of Cardiology 2018 Scientific Sessions.

The study was published simultaneously in the New England Journal of Medicine.

MOMENTUM 3 compared the newer HeartMate 3, a frictionless, magnetically levitated, centrifugal flow pump, to the previous-generation HeartMate II, a mechanical-bearing axial continuous-flow pump (Abbott). A key feature of the newer design is its intrinsic artificial pulse, which is asynchronous with the native heartbeat thereby reducing stasis in the pump that can lead to clot formation.

Both the newer- and older-generation devices, including systems made by other manufacturers, are approved for use as a bridge to transplantation and as destination therapy for patients with end-stage heart failure. The Achilles’ heel for assist devices so far, however, has been their significant risk for pump thrombosis requiring pump exchange, limiting their long-term durability, Cleveland said. “Other major adverse events of concern with left ventricular assist systems include stroke, bleeding, and device-related infection,” he added.

MOMENTUM 3 randomized 294 patients 1:1 to the HeartMate 3 versus the HeartMate II. Previously reported 6-month results showed the newer device to be linked with similar rates of death or disabling strokes, but lower rates of thrombosis and reoperations for pump failure.

At 2 years, as Cleveland showed here, patients who received the HeartMate 3 were significantly more likely to survive free from disabling stroke or reoperation (the primary endpoint) than patients randomized to the HeartMate II. That difference appeared to be driven by rates of reoperation in patients with the older device, which were tenfold higher; two-thirds of these operations were due to pump thrombosis or severe hemolysis. Overall survival was numerically higher with the newer device, and while disabling stroke rates were roughly similar between groups, the overall stroke rate was significantly higher in the HeartMate II patients versus the HeartMate 3 patients (19.2% vs 10.1%; P = 0.02).

Speaking during a press conference following the main tent presentation, co-PI Mandeep Mehra, MD (Brigham and Women's Hospital, Boston, MA), highlighted the stroke findings. This “clear signal” of benefit “tends to debunk the hypothesis that these miniaturized devices may all have higher complications with stroke,” he said. The stroke rate with HeartMate 3, he concluded, “is the lowest rate of stoke ever observed of any LVAD trial, halving [rates] as compared with anything we’ve seen before at 2 years.” Importantly, bleeding events were not significantly different between groups.

“Perhaps the most dramatic finding of this study is the dramatic reduction in thrombosis events requiring reoperation. In essence, [reoperation] was entirely prevented by the use of this magnetically levitated LVAD,” Januzzi said. “With this new technology, we’ve addressed the very important unmet need by reducing the onset of pump thrombosis, which is the precursor to either pump dysfunction or embolic stroke. This, I would say, really now brings forward the question—particularly with an 83% survival to 2 years—whether we should start thinking of a comparison to transplant in patients with advanced heart failure, because now we really have a safe alternative to the earlier versions of the ventricular assist devices we’ve used previously.”

Pressed to elaborate on how such a trial might look, Januzzi said it would require careful thought and planning but insisted “it’s an idea. It’s worth at least considering this now, because there is such a shortage of organs available for transplantation that patients inevitably end up waiting, sometimes in hospital, sometimes unsuccessfully, for transplantation.”

Mehra, for his part, called MOMENTUM 3 “a practice-changing result in the field.”

Its immediate impact, he suggested, might be to reassure physicians who have been reluctant to refer patients for destination therapy. In MOMENTUM 3, almost two-thirds of patients received their LVADs as “destination” devices.

“There’s always been this issue that, my god, there are so many complications with these devices, let’s suffer with the disease rather than suffer with the pump,” Mehra said. “Now we are showing that you don’t suffer with the pump as much as was previously seen with the earlier-generation devices. I think this is going to open the gate to more referrals and more opportunities for patients who are ineligible for transplant. . . . It should open the door much more widely.”

Heart Mate III: Has the Problem of Thrombus Been Solved?