No ACS? Noninvasive Follow-up Not Helpful in Most Chest-Pain Patients

The high numbers needed to test to prevent one MACE event don’t make sense, and guidelines should reflect this, experts say. 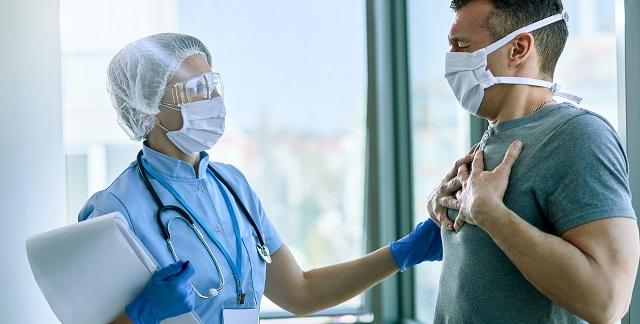 Noninvasive follow-up testing for patients who have acute MI ruled out after an emergency department (ED) visit for chest pain is associated with a small decrease in cardiac events over the next 30 days, but the large number of tests needed to prevent one event means this strategy “may not be optimal” in the vast majority of patients, authors of a new study conclude.

“These are beyond the number needed to treat that [are typically] considered to be acceptable,” co-author Adam Sharp, MD (Kaiser Permanente Southern California, Pasadena), told TCTMD. “This really raises questions that the general recommendation, which is what we've had up until now, that all patients with any suspicious symptoms concerning for potential ACS should get stress testing within 72 hours, just doesn't seem like the best approach for all the patients that show up to our emergency departments for acute evaluation.”

Current US guidelines recommend noninvasive testing either before discharge or within 72 hours of chest pain admission when acute MI has been ruled out on the basis of ECG and troponin levels. European guidelines, likewise, recommend early noninvasive tests for patients with inducible ischemia and suspected ACS. But as the investigators, led by Aniket A. Kawatkar, PhD (Kaiser Permanente Southern California), point out, other advisory bodies such as the UK-based National Institute for Health and Care have challenged the use of tests in this setting. A range of prior studies, using slightly different inclusion criteria and different risk factors, have also challenged the role of noninvasive testing in patients ruled out for ACS.

The numbers of patients makes this a pressing issue, Sharp said. Millions of patients present to EDs every year with chest pain symptoms. It’s the second most common reason for people to seek emergency help, he noted, yet the majority—somewhere between 1 and 13%--are found to not have an acute cardiac event.

The paper was published online yesterday in JAMA Internal Medicine.

Kawatkar and colleagues reviewed outcomes among the 79,040 patients who’d presented with chest pain to EDs within the Kaiser Permanente Southern California health system between January 2015 and December 2017 and who had MI ruled out on the basis of ECG or troponin. One-fifth of the cohort returned for follow-up noninvasive testing (or underwent testing before hospital discharge) within the recommended 72 hours—typically stress ECG (47.5%), stress echo (17.2%), or stress myocardial perfusion (35.2%), with a fraction undergoing CT angiography (0.1%).

Over the next 30 days, fewer than 1% of patients died or had a myocardial infarction. Among those who underwent early noninvasive follow-up, the risk of death or MI, the risk of MI alone, and the risk of death were all significantly reduced, but the numbers needed to treat to avoid one event were hefty. Testing 250 people would be needed to prevent one death/MI, 500 people to avoid one death, and 333 to avoid one MI. To avoid any major adverse cardiovascular events within 30 days, 200 discharged patients would need to get some form of noninvasive testing.

The investigators then turned to a range of risk factors that can be used to identify patients that might be especially likely to have a CV event, things like family history, age, sex, prior smoking, obesity, presence of CAD, etc. Here, too, substantial numbers of patients—numbering in the hundreds—would need to undergo noninvasive testing to prevent one event, with one conspicuous exception. Among patients with elevated troponins that were outside normal ranges but lower than the cutoff for an ACS diagnosis (so between 0.04 and 0.5 ng/mL) the number needed to treat fell to 14.

‘The findings of this study suggest a need for implementation of risk stratification models in the ED to better identify those more likely to benefit from noninvasive tests and avoid unhelpful tests,” the authors conclude.

Who Benefits From Tests?

Speaking with TCTMD, Sharp stressed that it’s no small thing for patients to take a day off work or disrupt their lives in other ways to travel back to a hospital for a test that in the vast majority of patients is of no use.

“Right now, obviously, we’re in the midst of COVID, and especially when all physicians and health systems are trying to figure out what things are really time sensitive to really improve outcomes and which things are not. . . . I think this is important information,” Sharp told TCTMD. “If I were talking to my parents or my family, as long as their workup in the ED doesn't show that they've actually had heart damage, which is a group that we excluded, getting a 72-hour stress test just hasn’t been shown to actually improve your outcomes in the short term and not in the long term either.”

Even outside of the COVID-19 situation, he continued, being more judicious about these tests makes sense. “As we figure out how to safely reopen and assess the risks of doing additional procedures that may lead to other procedures, that may have even higher risks, quite frankly I think what we've found is that people really should question if there's any real benefit to them,” Sharp said, “based on our number needed to treat [of] only one in 250 [who] might benefit.”

Commenting on the paper for TCTMD, Idan Roifman, MD (University of Toronto, Canada), who led a similar study published in 2019, believes the body of evidence to date supports a change to the guidelines.

“There are multiple studies now that have found very consistent results in different patent populations and different groups,” he said. This particular paper adds to previously published studies by using an instrumental-variable analysis to minimize confounding as well as by including information on troponin, which his paper did not. But all of the work to date “basically all come to the same conclusion,” Roifman observed, “which is that MI and death are actually very, very low in contemporary practice in those patients who go to the ‘emerg’ and have ACS ruled out and that the [ED] doctors feel are well enough to send home.”

When you “dig deeper,” he continued, it does appear that certain high-risk groups could benefit—here, those are identified using troponin.

Both Roifman and Sharp said that next steps should involve the creation of a risk score that can integrate all of the information that has emerged from the published studies, and includes up-to-date insights on troponin elevations.  “So we already know what a lot of these risk factors are, but it would be great if we could quantify them in a new standardized risk tool,” Roifman said.

Radiation Doses Have Decreased Over Time for CTO Procedures