Ten years in the making, randomized trial results on a half-century-old resuscitation mainstay should spur a sober look at societal beliefs and values. 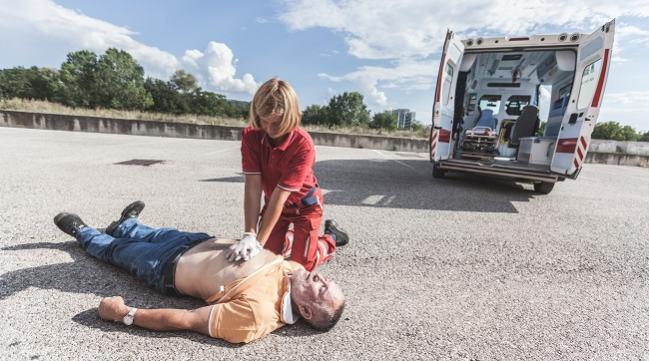 In the largest randomized, placebo-controlled trial of its kind, use of epinephrine (adrenaline) for out-of-hospital cardiac arrest was associated with a small increase in survival at 30 days, but at the expense of worse neurological impairment.

The findings call into question a drug that has been a mainstay for resuscitation outside of hospitals for more than 50 years and should prompt some soul-searching among policy makers around the globe in terms of which outcomes are most valued, investigators say.

“People have referred to adrenaline as being a double-edged sword and in fact that's what this trial has shown, that adrenaline can restart the heart but in doing so it's not good for the brain,” lead investigator Gavin Perkins, MD (Warwick Clinical Trials Unit, Coventry, England), told TCTMD. “If you give adrenaline to a patient in cardiac arrest, it successfully restarts the heart in about a third of patients, but then, tracking those patients through hospital, only a small number . . . survive to hospital discharge.”

Importantly, the difference in survival is less than 1% between patients treated with epinephrine versus placebo. “Among those who survive to hospital discharge, twice as many have severe brain damage if they've received epinephrine,” Perkins continued. “And by severe brain damage, I mean totally dependent on others for care.”

People have referred to adrenaline as being a double-edged sword and in fact that's what this trial has shown, that adrenaline can restart the heart but in doing so it's not good for the brain. Gavin Perkins

In the United Kingdom, Perkins estimated, approximately 30,000 people suffer a cardiac arrest every year and that number hovers at 300,000 in the United States. Fewer than one in 10 survive. CPR and defibrillation are the primary, evidence-based treatments for cardiac arrest, with epinephrine used when these fail. Usage of the drug varies across jurisdictions, but according to Perkins, 50-80% of patients with out-of-hospital cardiac arrest in the UK receive adrenaline, while a 2012 study looking at 11 geographical regions across the US and Canada showed that epinephrine use there ranged from 57 to 98%.

PARAMEDIC2 to the Rescue

The Prehospital Assessment of the Role of Adrenaline: Measuring the Effectiveness of Drug Administration in Cardiac Arrest (PARAMEDIC2) trial was launched at the behest of the International Liaison Committee on Resuscitation (ILCOR) after observational studies in over half a million subjects pointed to higher “return to spontaneous circulation” with epinephrine, but also to lower rates of neurological recovery.

For the trial, 8,014 patients with out-of-hospital cardiac arrest were randomized to receive epinephrine or saline placebo along with standard care. At 30 days, 3.2% of patients who received epinephrine and 2.4% of placebo-treated patients were alive (unadjusted OR 1.39; 95% CI 1.06-1.82), but there was no significant difference in the number of survivors who left hospital without debilitating brain damage, defined as a modified Rankin scale score of 3 or less (2.2% vs 1.9%; unadjusted OR 1.18; 95% CI 0.86-1.61).

Importantly, among survivors discharged from the hospital, the rate of severe neurologic impairment (modified Rankin scale score of 4 or 5) was actually higher among epinephrine-treated patients than in the placebo group (31.0% vs 17.8%).

According to Perkins, it will be up to the ILCOR, a consortium of seven worldwide resuscitation organizations, to decide how to interpret the PARAMEDIC2 results.

“It's provided a definitive answer to the question of: what are the effects of adrenaline? Now that we have that knowledge—which is a small chance of increased survival, but balanced against no improvement in favorable neurological outcome, and if you survive, you have double the chance of an unfavorable outcome—that prompts us to ask societal questions [related to] values and beliefs,” Perkins said. “Certainly, in the UK when we spoke to over 300 patients and members of the public before the trial started, 95% of them prioritized surviving without brain damage as more important than surviving alone.”

Societal values and beliefs may not be the same in different parts of the world, he added, noting that the ILCOR will now need to take these into account and “consider the findings of the PARAMEDIC2 trial alongside other evidence and discuss the implications of those findings with the wider community of patients and members of the public.”

Certain questions remain unanswered. In an accompanying editorial, Clifton Callaway, MD (University of Pittsburgh, PA), and Michael Donnino, MD (Beth Israel Deaconess Medical Center, Boston, MA), point out that PARAMEDIC2 did not address swift epinephrine use, since time-to-administration was a median of 21 minutes in the trial. As such, the study results cannot be extended to in-hospital cardiac arrest, where epinephrine is typically administered within minutes.

A bigger issue, they write, is that the trial did not control for, or measure, in-hospital treatments, potentially allowing for the sickest patients to receive more intensive care or introducing other types of bias.

In response, Perkins pointed out to TCTMD that while hospitals in the trial were not mandated to follow a specific care pathway, a prior study—for which Perkins was a co-author—indicated that postresuscitation care in the UK is “contemporary with best practice.” As such, any interventions that followed the use or lack of use of epinephrine in PARAMEDIC2 were, of necessity, a consequence of the initial intervention. Moreover, refuting the possibility that care might have been withdrawn prematurely in one of the groups, investigators saw no differences in median ICU time.

Contacted by TCTMD, Callaway declined to comment on whether he felt epinephrine use should be curbed on the basis of PARAMEDIC2, noting that he himself is a member of the ILCOR task force that will carefully weigh the new evidence. “By design, this is not done in a rush, because all opinions and critiques of new data need to be considered,” he said in an email, adding, “I stand by the deliberative process.”

The ILCOR’s progress can be followed via their website, he noted. When new guidelines are proposed they will be posted on the website so that public input can be gathered. “We are all looking forward to the discussion because we have been waiting for the results of this trial for over a decade!” Callaway said.

Perkins, for his part, pointed out that two other therapies for cardiac arrest remain. “CPR and defibrillation are 10 to 20 times more effective [than epinephrine], and those are interventions that every member of our community can deliver well before an ambulance arrives,” he said.

When to Say When? Timing of DNR After Cardiac Arrest Varies Widely Among US Hospitals