Eating breakfast may be a simple way to promote cardiovascular health, a researcher says. 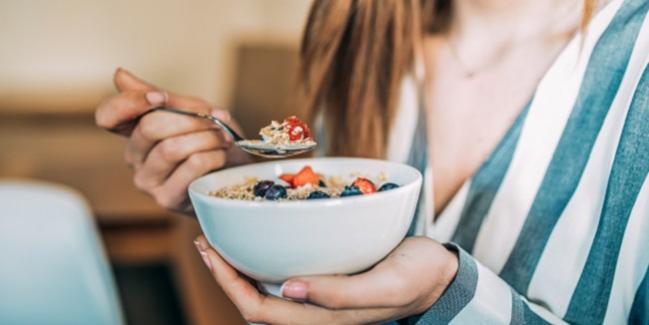 (UPDATED) Joining prior studies that support the importance of the first meal of the day, a new analysis suggests that adults in midlife or older who skip breakfast may be raising their risk of cardiovascular death.

Even after accounting for a host of potential confounders, US adults who said they never ate breakfast were nearly twice as likely to die from cardiovascular causes over the next few decades compared with those who had a morning meal every day (HR 1.87; 95% CI 1.14-3.04), according to lead author Shuang Rong, MD, PhD (Wuhan University of Science and Technology, China), and colleagues.

A weaker relationship, which fell shy of statistical significance, was seen for all-cause mortality (HR 1.19; 95% CI 0.99-1.42), they report in a study published online ahead of the April 30, 2019, issue of the Journal of the American College of Cardiology.

But, he added, “no matter whether this is a cause or an indication, I think it is good to encourage people to consider eating breakfast as one simple way to promote their cardiovascular health.”

Prakash Deedwania, MD (University of California, San Francisco), who said he reviewed the study before publication in JACC, agreed, noting that evidence on the potential cardiovascular harm of skipping a morning meal has been accumulating.

He added that this study, though subject to the inherent limitations of an observational analysis, is unique is demonstrating an association with cardiovascular mortality. And despite the uncertainty regarding the underlying mechanisms, he said, the findings underscore the importance of maintaining a healthy lifestyle that includes eating breakfast to get the body’s metabolism off on the right foot each day.

In general, Deedwania said, that first meal should make up 20% to 25% of the overall caloric intake for the day and include foods like cereal, oatmeal, and fruit. That should be followed by a reasonable lunch and a light dinner, he said.

Citing a popular maxim, Deedwania said: “[We] should eat breakfast like kings, lunch like princes, and dinner like paupers. We do exactly opposite of that in our daily lives.”

But José Peñalvo, PharmD, PhD (Tufts University, Boston, MA), who was not involved in the study, cautioned against translating results from population studies into individual advice.

“What a doctor should tell a patient [is that] skipping breakfast depends on the circumstances of the patient and the reasons behind that habit,” Peñalvo told TCTMD in an email. “At a population level, evidence finds skipping breakfast to be strongly linked to other unhealthful behaviors, so it is safe for the physician to explore with the patient other risk factors such as job strain, smoking, drinking, etc.”

US adults are increasingly skipping breakfast, and there is mounting evidence that doing so raises risks of a variety of adverse outcomes, including diabetes, hypertension, hyperlipidemia, and atherosclerosis. All of those factors are in turn associated with heightened risks of cardiovascular mortality, but whether morning eating habits are related to mortality risks has not been well studied.

Rong, Bao, and colleagues investigated that issue using data on 6,550 US adults ages 40 to 75 who participated in the National Health and Nutrition Examination Survey III conducted between 1988 and 1994, were free of CVD or cancer at baseline, and survived at least a year from an initial health exam.

According to household interviews, 5% of participants never ate breakfast, 11% rarely did, 25% ate breakfast some days, and 59% did every day.

After adjustment for body mass index, cardiovascular risk factors, and demographic, socioeconomic, diet, and lifestyle factors, those who never ate breakfast had a significantly greater risk of cardiovascular death over 17 to 23 years of follow-up (median 19 years). The relationship was particularly strong when focusing only on stroke-related mortality (HR 3.39; 95% CI 1.40-8.24).

“Our study supports the benefits of eating breakfast in promoting cardiovascular health,” the authors conclude.

It’s unknown whether skipping breakfast is having a direct biological effect that is causing an elevated mortality risk, but there are some plausible mechanisms, according to the investigators and Deedwania. Not eating in the morning could lead to overeating—typically of foods with poorer nutritional value—later in the day, which in turn could have adverse effects on health. Also, breakfast skippers might have higher blood pressure in the morning or worse lipid profiles.

Or, as also noted in an accompanying editorial by Borja Ibáñez, MD, PhD, and Juan Fernández-Alvira, PhD (both Centro Nacional de Investigaciones Cardiovasculares, Madrid, Spain), the behavior might be a marker of unhealthy behaviors related to diet and lifestyle.

The editorialists note that these findings, which are consistent with other studies exploring the link between breakfast habits and cardiovascular disease, “are relevant because they show for the first time the prospective association between skipping breakfast and risk of CV mortality.”

But there are limitations, they point out, including the possibility of residual confounding in observational data and the lack of information on the types of foods and drinks consumed at breakfast among participants.

Thus, the causality of the observed relationships remains murky, Ibáñez and Fernández-Alvira indicate.

“What is clear is that a pattern of skipping breakfast identifies a population at risk,” they say. “Surveying the breakfast pattern might be useful in improving risk prediction in the general population.”

For Deedwania, studies like this deliver an important message about the need to pursue a healthy lifestyle, which trumps interventions from the medical community. And in this case, he said, “the simple change in our of lifestyle to make sure that we start our day with a healthy breakfast could be a good start for a healthier heart.”

The message of the study, according to Peñalvo, is most relevant for public health measures and population-based strategies. “A regular nutritious breakfast seems to be a clear protective factor for developing (and dying from) CVD at the population level,” he said.

PCI on the Rise Among the Elderly, Who Are Reaping Survival Gains

No Need for Niacin? Meta-analysis Argues the End Is Nigh

Chew on This: Review Tackles Controversies in Nutrition for CV Health