The dosing in POISE was likely too high, the investigator acknowledges, but one expert argues that the practice should be definitively dropped. 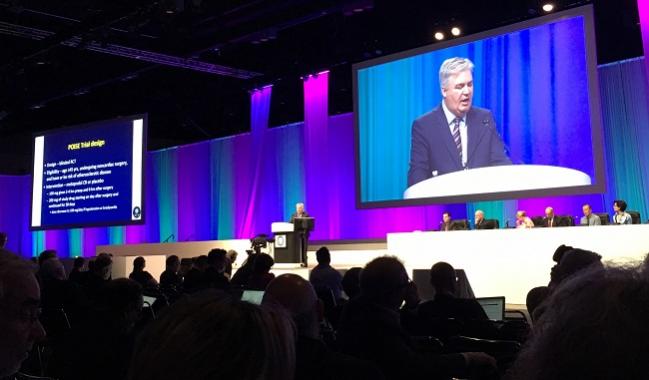 ORLANDO, FL—Beta-blockade during noncardiac surgery decreases the risks of nonfatal MI and cardiac revascularization within the first year post-op, but increases the risk of death and stroke, according to long-awaited data from the POISE trial.

Offering beta-blockers to patients undergoing noncardiac surgery, even those not previously taking the drugs, used to be common practice, despite no concrete randomized data proving benefit. In findings that paved the way for the 1-year data, the original 30-day results from POISE, released back in 2008, showed that perioperative beta-blockade with metoprolol reduced the primary endpoint but increased the risk of death and stroke among a population of 8,351 patients from 23 countries. More recently, the field has been muddled with research fraud, prompting some physicians—but not all—to abandon beta-blockade in this setting.

“The notion that reducing myocardial oxygen demand with beta-blockers would be a good thing during surgery kind of makes sense, except it just doesn't work,” Andrew Foy (Penn State Health, Hershey, PA), who was not involved with the study, told TCTMD.

#ACC18 1 year outcomes of POISE. Can we put an end to this practice already??? pic.twitter.com/I8wwRfVue6

“POISE results suggest that at 1 year, for every 1,000 patients having noncardiac surgery, metoprolol would prevent 12 patients from experiencing an MI and 6 from undergoing cardiac revascularization, but result in excess of 13 deaths and 6 strokes,” Devereaux concluded. “Research is needed to establish a way to derive benefit of perioperative beta-blockade while mitigating risk.”

Discussing the findings during the session, panelist Kim Eagle, MD (University of Michigan Frankel Cardiovascular Center, Ann Arbor), said while he admires the “fortitude” of the researchers in overcoming barriers to eventually collect and present the 1-year data, he “was always uncomfortable with the dosing in POISE.” The study protocol indicated that 100 mg of metoprolol would be given 2 to 4 hours pre-op and at 6 hours post-op, with 200 mg given daily for 3 months beginning the day after surgery (this dose decreased to 100 mg if the patient became hypotensive or bradycardic). “It seemed like a lot of beta-blockers in patients who were not on this class of drugs before,” Eagle added.

Devereaux agreed. “In retrospect looking at the trial, the dose is too large,” he said. “We see negative effects that there's a potential to decrease with a lower dose.”

The investigators arrived at their dosing scheme after seeing safety data in another acute MI trial being conducted in Asia at the time they were designing POISE, Devereaux explained. “We were able to see safety data overall with the same dosing of metoprolol, and we knew we were in a setting where there's high sympathetic activation. We knew that if we were going to have a hope of overcoming the sympathetic activation, which we believed was the pathway to which beta-blockers were likely to be effective, we were probably going to have to use a higher dose.”

While it “certainly is possible that a lower dose of beta-blocker may work” and be safer, he said, “the question we [must] confront is, will it actually have efficacy?”

Ultimately Devereaux said he believes that high-dose beta-blockers are in fact needed in this patient population, despite the POISE results, but they would need to be accompanied by changes in perioperative care, including having “continuous automated, noninvasive monitoring to know when patients are starting to go in the wrong direction, identify it early, and then correct it.” An issue the researchers encountered in POISE, he noted, “was the hypotension happened on surgical floors, it's late being recognized, . . . and that’s where I think we lose out on the potential benefits in these perioperative beta-blockers.”

Foy was not convinced. “I have not thought that [perioperative beta-blockade has] been a very useful practice for some time now, so I think that the results from POISE are just kind of the latest iteration to highlight that,” he said.

The study is “pretty remarkable in the sense that it's not just negative—beta-blockers increase mortality,” Foy continued. “Nonfatal MI doesn't really matter when it's increasing mortality by the same [degree] or more. This, in my mind, this should really kind of go the way of the dinosaur.”

This field has been further complicated by the controversy that emerged in 2013 over the DECREASE trials, in which the investigator was found to have fabricated results to show that perioperative beta-blockers actually improved outcomes among noncardiac surgery patients. After that, Foy said that he expected “the guidelines for preoperative beta-blockade would have been changed immediately, because there were other studies that were negative and showed that it was even harmful.”

Instead, in 2014, the American College of Cardiology and the American Heart Association came out with guidelines stating that patients undergoing noncardiac surgery who were already on beta-blockers could stay on them (class I), but that there were not enough data to support this practice in those who had not previously taken them (class IIb) and patients should never be started on beta-blockers on the day of surgery (class III).

“I'm not sure that the entire medical community necessarily knows the truth” about the history of the research in this field, Foy said, and that could be one reason usage continues.

If somebody needs surgery, they should just get surgery, and we may have to live with the idea that we can't really alter outcomes all that much. Andrew Foy

Also, since the practice of prescribing these drugs to surgical patients is so long held, perhaps this is “one of these medical recommendations that people get used to and then they just can't let go of,” he observed. “It tends to be harder to kind of de-adopt standard practices than it does to adopt them in the first place.”

It is “not unreasonable” to continue beta-blockers in patients who have CAD, who are already on the agents, if they are undergoing noncardiac surgery, Foy said, but otherwise he believes the practice should be dropped.

Moreover, pre-op testing in general might need to go, Foy suggested. “We used to think that we could change outcomes a lot by pre-operatively testing people. ‘Oh, do a stress test, and if they have CAD, we can start beta-blockers, we can revascularize, and we can improve outcomes.’ And clinical trials have told us more or less unequivocally that both of those ideas are false,” he said. “So, really, we should just stop preoperatively testing people. If somebody needs surgery, they should just get surgery, and we may have to live with the idea that we can't really alter outcomes all that much.”