In-lesion late lumen loss was similar for a gel-based balloon versus an EES, but a trend was seen for more thrombosis with the stents.

Presenting here at TCT 2019, Bernardo Cortese, MD (Clinica San Carlo, Milan, Italy), said that although the study is small and not powered for hard endpoints, it adds to existing data hinting that drug delivery via a balloon may optimize outcomes better in small vessels than a stent.

“The best-in-class drug-eluting stents show a rate of target lesion failure, which is around 10%,” Cortese said. In PICCOLETO II, “we analyzed the primary outcome measure, in-lesion [late lumen loss], and while hypothesizing the noninferiority to an EES, we were surprised to find out the superiority of DCB in terms of angiographic outcome,” he told TCTMD.

PICCOLETO II is the latest trial to show DCB as a potential alternative to DES in patients with small-diameter lesions. At EuroPCR 2019, investigators from the BASKET-SMALL 2 trial presented new angiographic data showing similar late lumen loss with both treatments out to 1 year. Surprisingly, the angiographic data also showed eight cases of stent thrombosis in the DES group versus no complete thrombotic vessel occlusions in the DCB group. The PICCOLETO II data line up with those results.

“Similarly, we found a 1.8% rate of stent thrombosis in the EES arm, and no thrombosis in the DCB arm,” Cortese told TCTMD. “We thus confirm the findings of BASKET-SMALL 2. The opportunity not to leave a stent in small vessels may protect from thrombotic events.”

PICCOLETO II is a follow up to the PICCOLETO study, in which patients with stable or unstable angina undergoing PCI of small coronary vessels (≤ 2.75 mm) were randomized to the Dior DCB (Eurocor) or Taxus DES (Boston Scientific). 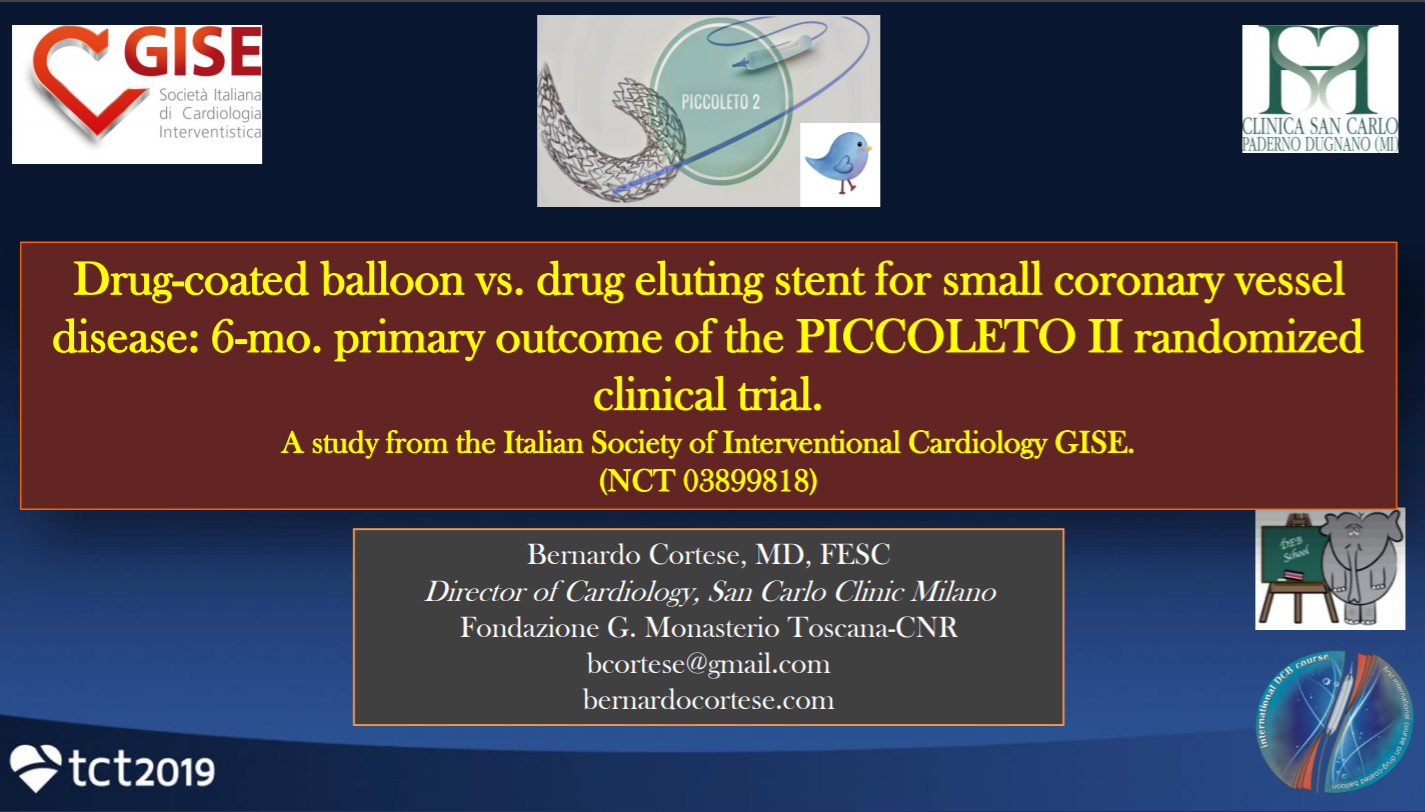 As Cortese explained to TCTMD, the first study used a balloon that had paclitaxel sprayed onto the surface. The drug was lost during transit and manipulation, which the researchers believed prevented it from having the desired effect. For PICCOLETO II, they instead used the Elutax SV (Aachen Resonance), “a new-generation DCB with a gel which protects and mostly helps [paclitaxel] to be delivered to the vessel wall, and persist there for 4 to 6 weeks in order to obtain its effect,” Cortese noted. The gel is hydrophilic, which is intended to help the drug stay on the balloon longer and prolong the absorption time. The paclitaxel dose on the balloon is 2.2 µg/mm2 .

For the multicenter, open-label trial, 118 patients similar to those in the earlier PICCOLETO trial were randomized to the DCB and 114 to the Xience EES (Abbott Vascular). Predilatation was strongly recommended for both strategies, with at least a 30- to 60-second dilatation of the balloon but no specific advice for the EES.

Minimum lumen diameter, a secondary endpoint, increased more in the DES group (from 0.83 mm before the procedure to 2.29 mm after the procedure) than in the DCB group (0.82 mm to 1.89 mm). Percent diameter stenosis changes, however, were similar in both arms. Other secondary endpoints of percent diameter stenosis and binary restenosis were similar between the treatment arms at 6 months (both in-stent and in-segment).

According to Cortese, the PICCOLETO II outcomes with regard to late lumen loss are among the best so far in small-vessel disease, a setting that includes studies such as PEPCAD SVD, BELLO, RESTORE SVD, and FASICO NATIVES.

In theory, as you go smaller and smaller, the benefits of non-scaffold-based therapy might be even greater," added discussant Robert M. Bersin, MD (Swedish Heart & Vascular, Kirkland, WA). “Have you broken this down to the very small [lesion] subsets, like 2.22 mm and smaller to see whether or not you get a signal of superiority with DCB? Overall you have equivalence here, but you may even be superior the smaller you go.”

Cortese responded that the study is a proof-of-concept, and while that possibility does exist, it remains to be shown in future trials.

Given that the drug on the balloon is paclitaxel and that a meta-analysis recently turned the endovascular community on its head with suggestion that this drug may increase mortality when used to treat PAD, Cortese told TCTMD that long-term follow up of patients will be conducted “even if all the studies performed in the coronary arena till now never gave such a signal.”

Drug-coated Balloons vs. Drug-eluting Stents for the Treatment of Small Coronary Artery Lesions: Angiographic Analysis from the Randomised BASKET-SMALL 2 Trial