“It’d be nice to have this as an option, because I do think there are some patients out there that probably could benefit from this,” one expert says. 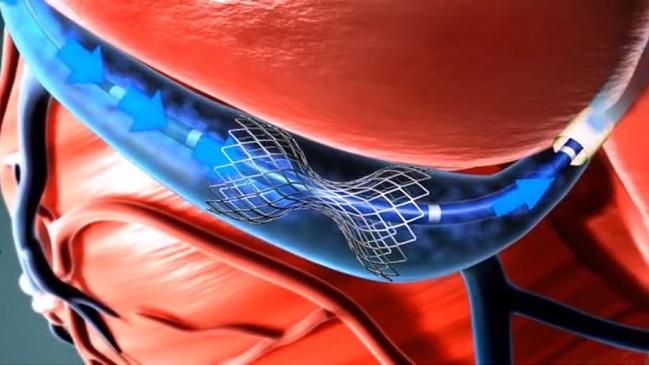 An implantable device that narrows the coronary sinus appears to be a good option for patients with refractory angina who are not candidates for further revascularization, real-world results from a single-center study suggest.

The Reducer (Neovasc) is a stainless-steel, balloon-expandable, hourglass-shaped device that is implanted percutaneously to narrow the coronary sinus. Its use “ultimately leads to an increase in coronary venous pressure, capillary and arteriolar dilatation, lower resistance to flow, and restoration of the normal endocardial/epicardial blood flow ratio, which is impaired in the ischemic myocardium,” researchers led by Francesco Giannini, MD (IRCCS San Raffaele Scientific Institute, Milan, Italy), explain.

Patients implanted with the device, which is available in Europe but has not been approved for use in the United States, had improvements in angina symptoms and quality of life that were sustained out to 1 year, with additional positive effects on exercise tolerance and dyspnea severity, the investigators report in a study published in the April 23, 2018, issue of JACC: Cardiovascular Interventions.

Despite use of conventional reperfusion techniques and optimal medical therapy, a subset of patients with angina will remain symptomatic, Giannini pointed out to TCTMD via email, adding that other nonpharmacological treatments are only partially effective at addressing the problem of refractory angina.

“The Reducer device provides an additional, effective option for these patients,” he said.

The current 50-patient study, though not randomized, “describes the largest available group of real-world patients, selected among both genders, a wide range of ages, and very different medical backgrounds,” and includes the longest available clinical follow-up, he said. In addition, the paper includes a detailed description of the technical aspects of the procedure that operators can use to ensure safe implantation, covering areas like coronary sinus sizing, implant site evaluation, guidewire selection, and alternative techniques to be used for challenging anatomy.

The lack of a control group is less of a concern in this study than in other observational analyses because it supports findings from the sham-controlled COSIRA trial, she said. “You want to know is it feasible in the real world and are you getting similar quality of life improvements and are they durable? And I think those were a couple of the things that this study really showed.”

“It’d be nice to have this as an option, because I do think there are some patients out there that probably could benefit from this,” Arnold said.

To address the limited amount of real-world data available regarding use of the Reducer, Giannini and colleagues evaluated use in 50 patients with chronic refractory angina who were receiving optimal medical therapy, were not suitable for further revascularization, and had objective evidence of myocardial ischemia.

Implantations occurred between March 2015 and August 2016, and the procedure was successful in all patients. There were no device-related adverse effects during the procedure or follow-up.

In the same timeframe, average NYHA functional class fell from 1.69 to 1.35, 6-minute walk distance increased from 287.0 to 388.6 meters, dyspnea severity score on the Borg scale after exercise improved from 1.0 to 4.5, and all Seattle Angina Questionnaire items (physical limitation, angina stability, angina frequency, treatment satisfaction, and quality of life) improved.

About one-third of patients were able to stop taking at least one antianginal drug.

The benefits achieved by 4 months were sustained out to 1 year.

Two patients developed ACS requiring PCI in the year after the procedure. “Although these coronary events were unrelated to the Reducer procedure, it is important to note that Reducer therapy does not have an effect on CAD progression, and further investigation is warranted in the presence of de novo symptoms,” the authors say.

There were no cardiac deaths during follow-up, and the two deaths that occurred were not considered related to the procedure (one due to ischemic stroke and one due to urogenital malignancy).

“In our single-center experience, no adverse event was recorded during and after device implantation during the entire follow-up,” Giannini said. He noted that long-term follow-up is needed to further evaluate safety and efficacy, to assess the risks of potential late and very late complications, and to clarify the effect of the device on myocardial ischemia.

Arnold said it’s hard to nail down the size of the population of patients who could potentially benefit from Reducer implantation, pointing out that some patients who are deemed refractory are likely not being appropriately revascularized. Nevertheless, “having some treatment that actually works for some of these patients is actually really important, because I think the other alternatives that we have like [enhanced external counterpulsation] don’t provide as durable or reliable of results,” she said.

She added that she wouldn’t have concerns with using the device in many patients.

“When you’re getting to that point where you’re really struggling to find something else that works and it’s going to help these patients’ quality of life, I’m not sure there would be a patient I wouldn’t really consider,” except perhaps a patient with heart failure who might eventually need cardiac resynchronization therapy, she explained.

In the study, 20% of patients did not respond to the therapy despite careful patient selection, Giannini noted. He pointed to another analysis for a potential explanation. “Despite the low number of cases and the lack of statistical significance, failure to achieve high wedge pressures during occlusive balloon inflation in the coronary sinus seems to be correlated with poorer or absent clinical response,” Giannini said. “This may be attributed to tributaries of the coronary sinus opening downstream of device implantation site. They are thought to work as an anatomical bypass against the increased venous pressure normally achieved with the Reducer device, minimizing its effect. Again, numbers are still too small to achieve any significance, and at the present day this remains a simple speculation.”

Thus, a larger, more in-depth analysis of the predictors of response is needed, Giannini added.

The Coronary Sinus Reducer: A Device Based Therapy for Refractory Angina