Although the causes and consequences of this bleeding are not fully known, experts say it’s worth keeping an eye on. 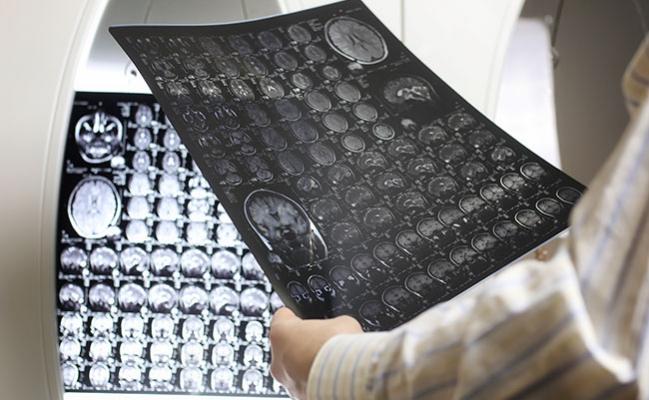 WASHINGTON, DC—Nearly a quarter of patients who undergo TAVR appear to develop new silent cerebral microbleeds after their procedure, according to a small observational study.

Microbleeds occur when blood components leak through “fragile cerebral microvascular walls,” explained Eric Van Belle, MD, PhD (Hôpital Cardiologique, Lille, France), in his presentation at the American College of Cardiology (ACC) 2017 Scientific Session. Often spontaneous in the general population or related to anticoagulation, he said, “they are known as markers of risk of stroke, dementia, and cognitive impairment.”

What’s unknown is whether endovascular procedures could trigger these events, he added.

For the study, Van Belle and colleagues performed MRI in 84 patients before and 3 days after transfemoral TAVR (Sapien; Edwards Lifesciences). Before TAVR 26.1% had signs of at least one cerebral microbleed on MRI, and 22.6% had signs of at least one new microbleed appearing after, bringing the total incidence to 40%. Those with microbleeding at baseline were more likely to have hypertension, diabetes, and a history of prior stroke or TIA. Additionally, a history of bleeding was more common for patients who had new microbleeds occur post-TAVR compared with those who had no new bleeds.

Patients who developed new microbleeding tended to have longer mean fluoroscopy time, more postdilation, and to have received protamine on top of unfractionated heparin. On multivariate analysis, both prolonged procedures (RR 1.21 per 5-minute increase in fluoroscopy time; 95% CI 1.01-1.17) and postprocedural acquired Von Willebrand Disease (RR 1.42 per 0.1 unit of high-molecular-weight multimer ratio; 95% CI 1.08-1.89) were associated with an elevated risk of new microbleeds.

There appears to be “no relationship between the occurrence of cerebral emboli and microbleedings,” Van Belle said in his presentation.

Microbleeds were linked to neurocognitive deficiencies no matter whether they were seen before or after TAVR. By 6 months, patients who had new microbleeds were more likely to have a modified Rankin scale score of greater than 1 than those who did not (35% vs 12%; P = 0.008).

More research is needed to understand the clinical impact of the phenomenon and how occurrence of microbleeds is affected by the anticoagulation regimen, Van Belle said.

MRI Before and After

Referring to the current study as “elegant,” Athena Poppas, MD (Rhode Island Hospital, Providence), praised the thoroughness of its evaluations. “[V]ery careful pre- and postprocedural assessment, both on MRI and neurological assessment, is crucial given the complexities of these patients,” she said.

Poppas asked Van Belle to elaborate more on why fluoro time might be playing a role in risk. “I suspect that it really is reflecting a number of other parameters, such as catheter manipulation, second balloon dilation, or vascular complexity,” she said.

Van Belle agreed, pointing out the need for care in deciphering predictors. “It’s very difficult to be sure what is what,” he cautioned. “Between the cerebroemboli and these microbleeds, you can see that a lot can occur in a few . . . hours,” Van Belle said, adding, “We have to be careful to understand what would be the best option for these patients.”

Stressing that he didn’t “want to get in the radiological weeds here,” Thaler asked how the researchers differentiated between signs of bleeding and calcium on MRI, “because intuitively, I’m not sure why these patients would be getting microbleeds.”

Van Belle acknowledged that difficulty, saying the analysis must be done carefully. Two neurologists looked at MRIs in the current study, blinded as to whether the images were pre- or post-TAVR, he said.

Commenting in a press conference, Alistair Phillips, MD (Cedars-Sinai Medical Center, Los Angeles, CA), said that the results show “procedural issues are related” to the occurrence of new microbleeds. The study underlines the importance of “really coming up with guidelines and working as a team to improve the outcomes of these new procedures that are going on and are going to have incredible impact on our society,” he stressed.

Asked by TCTMD at the press conference whether microbleeds would be expected to result in long-term harm, and how such events might be dealt with, Van Belle acknowledged the uncertainty.

“Even with microbleeding in the general population, we don’t know what we should do with it,” he said. “One of the questions behind it is: is it really the microbleeding which is a problem? Or do we only by seeing this microbleeding [identify] patients with tiny vessel problems?”

What’s more certain, Van Belle emphasized, is that patients who experience microbleeding are at risk of a worse outcome and thus should be watched more carefully. In terms of ongoing study, it would be helpful for trials like GALILEO and ATLANTIS to conduct MRI follow-up, he said, in order to improve the knowledge base in this area.

Blood Test May Be Useful for Detecting Aortic Regurgitation During TAVR