PRESERVE Puts the Kibosh on Approaches to Preventing Contrast-Associated AKI

No major surprise: IV sodium bicarbonate and oral N-acetylcysteine were no help in thwarting the complication following angiography. 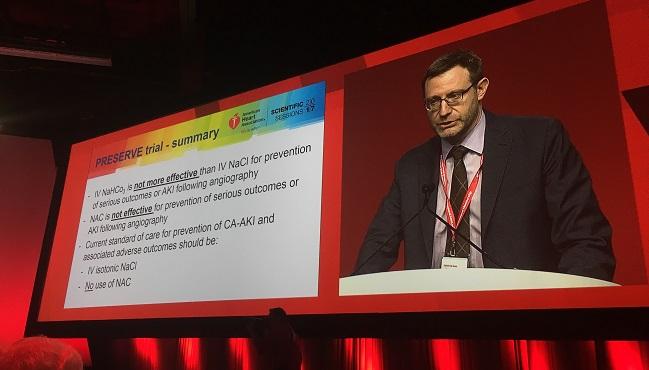 The rate of a primary composite outcome of death, dialysis, or a persistent increase in serum creatinine of at least 50% at 90 days was not reduced with either intervention in the 2 x 2 factorial trial, according to Steven Weisbord, MD (VA Pittsburgh Healthcare System, PA).

Secondary outcomes, including contrast-associated AKI, did not differ either, he reported at the American Heart Association Scientific Sessions 2017.

Based on these findings, which were published simultaneously online in the New England Journal of Medicine, “the prevention of contrast-associated AKI and adverse outcomes should include the administration of intravenous sodium chloride, or saline, in patients who are at high risk, and there is no role for the administration of N-acetylcysteine,” Weisbord said during a press conference, adding, “It’s our belief that this study really should now eliminate the use of sodium bicarbonate as a fluid.”

Commenting for TCTMD, Somjot Brar, MD, MPH (Kaiser Permanente, Los Angeles, CA), said the overall impact of the study will be limited because it simply confirms what most clinicians already know.

“I thought the evidence to date was already very convincing that these two therapies were ineffective, and most practitioners probably have already abandoned this as a practice,” he said. “For those people who were holdouts and still had some hope or expectation that these were going to be effective, I think this might be of more significance to them.”

Brar said other strategies geared toward optimizing fluid administration—such as hydration guided by hemodynamics—are more likely to be effective at avoiding contrast-associated AKI.

The PRESERVE trial, which was conducted at 53 sites in the United States, Australia, New Zealand, and Malaysia, randomized patients with chronic kidney disease undergoing coronary or noncoronary angiography to IV sodium bicarbonate or IV sodium chloride and to oral N-acetylcysteine (1,200 mg bid for 5 days starting about 1 hour after angiography) or placebo.

The researchers were aiming to enroll 7,680 patients, but the trial was stopped early after 5,177 were randomized when a planned interim analysis revealed there was little chance of showing significant differences between groups.

Secondary outcomes, including contrast-associated acute AKI at 3 to 5 days after the procedure, were unaffected by the interventions.

After accounting for multiple comparisons, the findings did not vary across patient subgroups.

Serving as a discussant following Weisbord’s presentation at the press conference, Núria Pastor-Soler, MD, PhD (University of Southern California, Los Angeles), a nephrologist, said PRESERVE addressed an important clinical question that had been studied in prior studies without consistent results and described the current findings as “pretty definitive.”

“This is an important study that helps resolve the uncertainty of how best to manage and preserve kidney function in patients that undergo angiography and receive contrast dye,” Pastor-Soler said. “This study shows that neither type of fluids given at the procedure nor the use of antioxidant therapy appears to affect outcomes, especially kidney outcomes, significantly in this population.”

She said potential next steps might include longer follow-up of the study population and evaluation of differences between treatments during emergency angiography, during radiographic and angiographic procedures requiring larger volumes of contrast material, in terms of biomarkers of kidney damage, and between men and women.