The FAVOR II studies open the door to an angiography-based strategy of assessing hemodynamically significant stenosis. 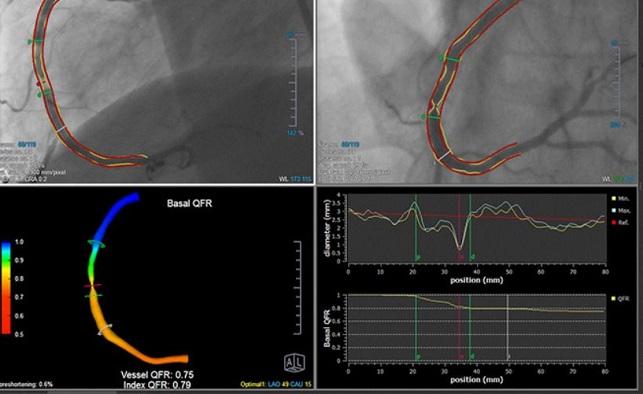 Accuracy of the method, known as quantitative flow ratio (QFR), was investigated in the FAVOR II China and FAVOR II Europe-Japan studies, which were presented in a First Report Investigations session. QFR is an estimate of FFR based on fluid dynamic equations and emulated hyperemic flow velocity. It is computed from lumen contours in two standard angiographic projections, and contrast flow velocity is estimated by frame count during baseline conditions. The image runs are then transferred by local network to the QFR system.

The prospective, multicenter trial enrolled 308 consecutive patients at five centers in China in June and July 2017. Eligible patients had at least one lesion with diameter stenosis of 30% to 90% and reference diameter 2 mm or greater by visual estimation. In this study, QFR (AngioPlus, Pulse Medical Imaging Technology, Shanghai, China), quantitative coronary angiography (QCA), and FFR (reference standard ≤ 0.80) were assessed online in a blinded fashion during coronary angiography, then reanalyzed offline in an independent core lab. In total, online QFR and FFR results were obtained in 328 of 332 vessels.

These data demonstrate “clinical utility of QFR for use in diagnostic catheterization laboratories,” Xu said.

QFR also showed superior sensitivity and specificity in comparison to 2-D QCA with FFR as the gold standard in FAVOR II Europe-Japan: 88% vs 46% and 88% vs 77% (P < 0.001 for both). The overall diagnostic accuracy of QFR was 88%. When the researchers analyzed feasibility per vessel, the rate of successful QFR computations in attempted cases was 97%.

The observational study enrolled 272 patients with the same angiographic inclusion criteria as FAVOR II China at 11 centers in Europe and Japan from March to October 2017.

Westra and colleagues also looked at results of the QFR-FFR hybrid approach. “Assuming that FFR is required in the diagnostic gray zone of QFR, pressure wire-free assessment is possible in potentially 68% of all lesions while ensuring more than 95% accuracy,” he said. The same was observed in FAVOR II China.

Both Xu and Westra concluded that the next step is adequately powered randomized trials comparing clinical outcomes with QFR versus standard diagnostic strategies.

During a discussion, panel members deliberated whether a study of clinical outcomes is required.

Alexandra J. Lansky, MD (Yale School of Medicine, New Haven, CT), referred to QFR as a “somewhat disruptive” technology. “It really can be used in all cath labs,” she said, noting that QFR “takes away all the complications associated with invasive FFR assessment. . . . We have very consistent results here with very high accuracy. Do we need to go to clinical outcomes?”

However, Gary S. Mintz, MD (Cardiovascular Research Foundation, New York, NY), pointed to questions about the potential for bias and overall generalizability, the need for a technician, and comparisons to previously seen limitations of online QCA. “It may be possible to improve the [QFR] algorithm so that it becomes automated,” he said, adding, “Reproducibility is important.”