(UPDATED )The phase II GEMINI-ACS-1 study showed no increase in clinically significant bleeding with the move, but efficacy remains unclear. 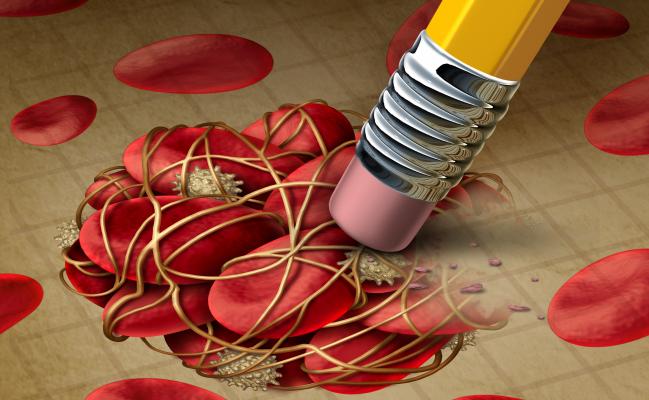 The rate of TIMI clinically significant bleeding not related to CABG was about 5% when either rivaroxaban (Xarelto; Janssen Pharmaceuticals) or aspirin was combined with a P2Y12 inhibitor (HR 1.09; 95% CI 0.80-1.50), E. Magnus Ohman, MD (Duke Clinical Research Institute, Durham, NC), reported here at the American College of Cardiology 2017 Scientific Session.

The findings, published simultaneously online in the Lancet, suggest that replacing aspirin with low-dose rivaroxaban does not increase bleeding and is therefore safe. Ohman noted that the trial was not powered to evaluate effects on ischemic outcomes, which nonetheless did not differ between trial arms.

Because GEMINI-ACS-1 is a phase II trial, Ohman said that it should not inform clinical practice. “This is just a stepping stone to try to better define how we can actually go forward with combination therapies in the future,” he commented during a panel discussion after his presentation.

He declined to reveal what plans, if any, exist for pursuing the combination of rivaroxaban and a P2Y12 inhibitor in the post-ACS setting in a larger phase III trial, but said at a press conference: “I think we’ve opened the door here to looking at replacing aspirin.”

Aspirin plus a P2Y12 inhibitor has long been the standard antithrombotic therapy after ACS, but there remains a risk of major cardiovascular events despite treatment. Some studies have evaluated triple therapy—anticoagulation plus dual antiplatelet therapy (DAPT)—to address that residual risk. One of those—ATLAS ACS 2-TIMI 51—showed that adding low-dose rivaroxaban reduced mortality and ischemic events following ACS, but that came at the cost of an increase in major bleeding.

Another approach was studied in WOEST, which randomized patients with an indication for oral anticoagulation who were undergoing PCI to warfarin plus clopidogrel or warfarin plus DAPT. Eliminating aspirin from the regimen was associated with less bleeding and better efficacy. There were also suggestions in the more recent PIONEER AF-PCI trial, which evaluated rivaroxaban-based treatment in patients requiring oral anticoagulation who underwent PCI, that removing aspirin reduces bleeding without harming outcomes.

“Collectively, these findings suggest that the excessive risk of bleeding seen with triple antithrombotic therapy in the post-acute coronary syndromes and post-PCI settings seems to be strongly affected by aspirin, as well as by the dose of the oral anticoagulant used,” Ohman et al write.

GEMINI-ACS-1, which was conducted at 371 centers in 21 countries, was designed to evaluate the safety of replacing aspirin with low-dose rivaroxaban in post-ACS antithrombotic regimens. The trial included 3,037 patients with ACS (49% STEMI, 40% NSTEMI, and 11% unstable angina) randomized to rivaroxaban 2.5 mg twice daily or aspirin 100 mg daily on top of P2Y12 inhibition with either clopidogrel or ticagrelor (Brilinta; AstraZeneca); choice between the latter two drugs was left to the discretion of study investigators before randomization. Treatment was started within 10 days of presentation and lasted for 6 to 12 months (median 9.6 months).

Most of the bleeding events that occurred during follow-up were classified as TIMI bleeding requiring medical attention, with few severe or major bleeds. There were no differences in bleeding between rivaroxaban- and aspirin-treated patients using TIMI, BARC, or GUSTO definitions, although rivaroxaban was associated with more ISTH major bleeding (2% vs 1%; P = 0.042). Ohman said that finding should be interpreted in the context of the multiple comparisons made.

Bleeding was generally more common in patients receiving ticagrelor instead of clopidogrel, but rivaroxaban and aspirin carried similar bleeding risks regardless of which P2Y12 inhibitor was used.

Exploratory analyses showed similar rates of ischemic outcomes, including a composite of cardiovascular death, MI, stroke, or definite stent thrombosis, in both study arms. The researchers point out, however, that “these are hypothesis-generating findings.”

They also performed an exploratory landmark analysis at 30 days. That suggested greater risks of both TIMI clinically significant bleeding and composite ischemic outcomes in the rivaroxaban arm in that initial period—though without statistically significant differences—followed by a lack of differences after 1 month.

“Although our trial is not large enough to explore this issue in a more meaningful way, it does suggest that a more intense antithrombotic therapy is required in the acute phase of myocardial infarction,” Ohman et al write.

In an accompanying editorial, Paul Gurbel, MD, and Udaya Tantry, PhD (Inova Heart and Vascular Institute, Falls Church, VA), make the case that aspirin should not be removed as a cornerstone of ACS therapy based on these results.

“The antithombotic effect of aspirin is largely explained by inhibition of COX 1, a central enzyme mediating platelet activation,” they write. “This and pleotropic cardioprotective properties should be considered before forsaking or replacing aspirin, particularly early in the highly prothrombotic state of a new acute coronary syndrome.”

They note that even though there were no statistically significant differences between the rivaroxaban and aspirin arms in GEMINI-ACS-1, multiple bleeding measures tended to favor aspirin and the study could not exclude an increase with rivaroxaban. In addition, composite ischemic events occurred at the lowest rate in patients treated with ticagrelor and aspirin.

“Thus, it might be premature to believe that a low-dose [factor] Xa inhibitor on top of a P2Y12 inhibitor can be effective and safe therapy for most stabilized patients with acute coronary syndromes. The totality of the evidence of GEMINI-ACS-1 favors aspirin,” Gurbel and Tantry write.

“We agree with the investigators that current adverse event rates in patients with acute coronary syndromes are unacceptable and mandate investigations of novel treatment strategies,” they say, adding, however, that a better understanding of antithrombotic mechanisms “seems necessary before undertaking larger attempts to replace the cornerstone. . . . Until we have more convincing evidence, aspirin remains the cornerstone on which P2Y12 blockade is added to treat the highly prothrombotic state of acute coronary syndromes.”

SPIRE 1 and 2: Support for PCSK9 Inhibition but Not Bococizumab