Off Script: Black Lives, COVID-19, Katrina, and Social Justice—Time for Healers to Step Up

The devaluation of black life during times of catastrophe has yet to be resolved. Now, more than ever, that should change. 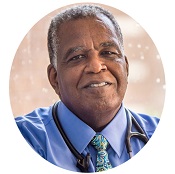 “Natural” disasters have always exposed the longstanding disparities in quality-of-life and longevity related to socioeconomic status and race/ethnicity. This time around a viral pandemic is driving up mortality in African Americans and other disadvantaged populations, highlighting the intersection between patient outcomes, social determinants, and the public health. Like most New Orleanians, especially in the black community, I have lost a childhood friend and a member of my extended family to COVID-19.

I was raised in the segregated South as a child of the Lower Ninth Ward in New Orleans, at one time a large African American neighborhood. I lost my private practice, Heartbeats Life Center, and my family’s home post-Katrina in 2005. Back in 1965, during the devasting floods of Hurricane Betsy, I experienced my paternal grandfather’s drowning despite the efforts of my brother and I to save him. My family and others from our block spent days on a roof, exposed to the elements and ignored by the authorities, surrounded by over 20 feet of putrid water and the dead or dying. Today COVID-19 is a sobering reminder, once again, of the clear and profound disparities in disaster survival among people with lower socioeconomic status and those with limited means to escape the ravages of terrible storms. The devaluation of black life during times of catastrophe has yet to be resolved.

We as physicians should recognize that while life expectancy and overall healthcare has improved dramatically for all Americans over the last century, the distribution of these benefits has not occurred equitably. Cardiologists have seen that African Americans have a higher risk of hypertension, diabetes, and obesity—especially in black females—premature myocardial infarction, stroke, chronic kidney disease, and end stage renal disease. As early as the Heckler report in 1985 and confirmed by the Institute of Medicine's Unequal Treatment report in 2002, public health officials and most practicing clinicians have been aware of these disparities. Yet very little has changed. Nothing describes the nature of these inequities as clearly as the persistent black-white disparity in life expectancy. Publicly available data from the Centers for Disease Control and Prevention shows that black men for decades have a life expectancy anywhere from 5 to 6 years less than that of  non-Hispanic whites; for black females, that gap is 3 to 4 years.

The present COVID-19 crisis for African Americans across diverse geographic areas will only worsen this divide. COVID-19 deaths among African Americans in states including Louisiana, Illinois, Michigan, North Carolina, Kansas, and others, are distressingly higher than predicted, based solely on percentage of the population. Higher rates of underlying conditions seen in African Americans may lead to increased COVID-19 mortality, including hypertension, obesity, diabetes, chronic kidney disease, and cardiovascular disease, but the prevalence of these comorbidities do not fully explain the phenomenon.

Instead, the disproportionate rate of COVID-19-related deaths is a toxic gumbo that mixes social determinants, comorbidities, health-seeking behavior, fewer identifiable sources of primary care, and less understanding of how to navigate a complex health system. As I’ve recently argued, COVID-19 mortality in blacks is a sentinel event, similar to adverse hospital occurrences, unmasking system failures and unacceptable care that need to be swiftly identified and mitigated.

Add to this a myriad of other realities. A higher proportion of African Americans work in service industries and “essential jobs,” exposing them to coronavirus infections. Prisons, with a disproportionate black and minority population, are breeding grounds for COVID-19. Limited early testing at the beginning of the pandemic led to delayed diagnoses, allowing the disease to spread and reach a more dangerous and potentially lethal stage. Disadvantaged persons have a higher use of public transportation without the ability to social distance or work from home. Finally, as previously reflected in the difficulties faced in obtaining true diversity in clinical trials, there remains a historical distrust of the healthcare system among African Americans and other minority groups.

All of these factors have a wide-reaching impact. Not only are black lives lost but healthcare dollars wasted by the disproportionate degree of African Americans with Medicare-mandated payment for dialysis for end-stage renal disease, higher heart failure hospitalizations, premature myocardial infarction, long-term disability from stroke, and the premature loss of people who could contribute in a positive manner to our nation’s financial health and economy because they became disabled at an early age. Having availability of insurance, an identifiable source of primary care, and appropriate referral to specialists, including cardiologists, may stem the tide of not only death and disability but also wasted, taxpayer-funded healthcare dollars

There's no reason to expect that with the mandated 15 to 20 minutes of a face-to-face office visit we'll change the disabling degree of death and disability in the black community without our society as a whole addressing these deep-rooted issues. A recent report in terms of the association of low socioeconomic status with premature heart disease published in JAMA Cardiology by Rita Hamad, MD, PhD (University of California, San Francisco), and others confirms that focusing on traditional risk factors may decrease coronary heart disease, presently and in the future, but if we do not address socioeconomic disparities, including the right to healthcare, it is unlikely that we will be able to change the unfortunate persistent death and disability seen in African Americans.

We as physicians cannot practice in a vacuum. Unrelated to those who perpetrate thoughtless violence, the calls for social justice so prominently broadcasted to the world via righteous protests are not divorced from the inequities in healthcare I’ve described. Despite the complexities of our own personal lives as physicians, including the need to provide for our families, along with our academic and/or clinical responsibilities, we can do more to ensure that the power of medicine goes well beyond our personal goals and desires. We are in an ideal position to advocate for social justice and to address primordial, primary, and secondary prevention of cardiovascular diseases contributing to the shortened life spans and the disproportionate COVID-19 death seen across racial/ethnic minorities and other disadvantaged populations.

Martin Luther King Jr is often cited for his work in public accommodations and voting rights. In 1966 he also stated: “Of all the forms of inequality, injustice in healthcare is the most inhumane.” That's why I am compelled to speak out and we all, as healers, must do so.

Ferdinand is a professor of medicine and the Gerald S. Berenson Endowed Chair in Preventive Cardiology at Tulane Heart and…