Sodium Wars: Where Some See Linear Link With All-Cause Death, Others See No Need to Change Western Ways 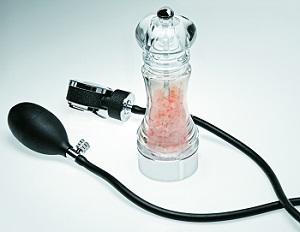 Long-term follow-up from two hypertension studies suggests there is a “direct linear relationship” between sodium intake and all-cause mortality, with higher intakes of sodium associated with an increased risk of death.

Over a follow-up period of more than 20 years, investigators observed no evidence of a U- or J-shaped curve, where the risk of death is increased at lower levels of sodium intake. For each 1,000-mg increase in sodium, assessed by multiple 24-hour sodium excretion measurements, the risk of mortality was increased 12% (HR 1.12; 95% CI 1.00-1.26).

“I think sodium levels should be less than 2,300 mg per day,” said lead investigator Nancy Cook, ScD (Brigham and Women’s Hospital, Boston, MA), referring to the currently recommended target from the 2015-2020 Dietary Guidelines for Americans. “I would be a little bit hesitant to suggest less than 1,500 mg per day as this is very difficult to achieve. There are few people and very few studies with sodium intakes that low—you’d really have to work at it. It does look like there might be benefit if you could do it, such as in patients with cardiovascular disease, but it’s a special population. It’s not a wide public health recommendation.”

"There are few people and very few studies with sodium intakes that low—you’d really have to work at it."

The American Heart Association (AHA) currently recommends that individuals aim to consume no more than 1,500 mg of sodium per day, although the group concedes it’s a challenge to reduce sodium to these low levels.

In an editorial accompanying the study, which was published early online ahead of the October 11, 2016, issue of the Journal of the American College of Cardiology, Andrew Mente, PhD, Martin O’Donnell, MD, and Salim Yusuf, MD (Population Health Research Institute/McMaster University, Hamilton, Canada), take issue with how the data are being interpreted. Speaking with TCTMD, Mente argued that the data support only modest reductions in sodium among individuals consuming a high-sodium diet and indicate that there is no clinical benefit in reducing sodium to very low levels.

“Sodium is an essential nutrient,” said Mente. “It’s not tobacco. Without sodium, you die. The body needs sodium. The optimal level of tobacco is zero, but with sodium, it’s not zero. The question is, how much sodium? Every essential nutrient in the body tends to have the so-called U-shaped relationship with mortality—calcium, magnesium, vitamin D, and so on and so forth. Why would sodium be any different?

“The researchers are making it seem like there’s a linear relationship when in fact it violates the laws of biology,” he stressed. “It doesn’t make any sense.”

The new findings come from an analysis of the Trials of Hypertension Prevention (TOHP) I and II, which were conducted in the late 1980s and 1990s. In TOHP I, investigators evaluated the effects of four supplements and three lifestyle interventions, including weight loss and sodium reduction, on blood pressure in 2,182 men and women over 18 months. In TOHP II, researchers studied the effects of sodium reduction and weight loss on blood pressure in 2,382 men and women with hypertension.

"It’s not tobacco. Without sodium, you die."

For this latest study, Cook along with co-authors Lawrence Appel (Johns Hopkins University, Baltimore, MD), and Paul Whelton, MD (Tulane University School of Public Health and Tropical Medicine, New Orleans, LA), first assessed all-cause mortality in the randomized treatment assignment in TOHP I and II. This included 744 participants in TOHP I who were randomized to the sodium reduction intervention or control arm and all patients participating in TOHP II. Over a median follow-up of 25.7 years for TOHP I and 22.4 years for TOHP II, there were 77 and 174 deaths, respectively.

In an adjusted model, there was a trend toward lower all-cause mortality among individuals randomized to sodium reduction, but the difference was not statistically significant (HR 0.85; 95% CI 0.66-1.09).

To TCTMD, Cook said that with the long follow-up, there is an expectation that any mortality benefit from the sodium reduction “might wash out over time, and this did happen to some extent.” The largest separation of the mortality curves occurred at 10 years, but there was still a trend in the reduction of death with patients randomized to sodium reduction. “It’s a pretty big effect for an intervention that happened 20 years ago,” she said.

Next, the researchers performed an observational analysis based on the urinary sodium excretion levels of 1,844 participants in TOHP I and 1,167 participants in TOHP II who had not been randomized to the sodium-reduction intervention. Overall, the average sodium excretion level during the study period was 3,766 mg per 24 hours, and there were 272 deaths in the post-trial follow-up period.

In their statistical model, the researchers also state there was a linear relationship between sodium intake and long-term mortality, “with no deviation from linearity detected.”

For Mente, as well as for O’Donnell and Yusuf, the data simply don’t support such a conclusion. He said the researchers are placing too much emphasis on the one analysis—where average urinary sodium excretion was treated as a continuous term—and pointed to the data not showing a statistically significant difference in mortality among the patients stratified by sodium intake.

“They report one significant effect out of many tests that they do,” said Mente. Moreover, the relationship between mortality and sodium was not linear, he noted, adding the “statistics can be misleading.” Mente told TCTMD the “spline analysis,” which was a plot of average of sodium intake and total mortality in the observational analysis and was marginally significant for a linear relationship (P = 0.048), had extremely wide confidence intervals, particularly for sodium intakes at the high and low end.

The bottom line, said Mente, is that TOHP I and II were excellent blood-pressure studies, but they were not intended to assess clinical outcomes. “This study does not settle the debate,” he said. “If anything, it just creates more uncertainty.”

Cook believes the editorialists are too dismissive of the findings, particularly the 15% nonsignificant reduction among patients in TOHP I and II randomized to sodium-reduction interventions. Such a reduction is important, particularly from a population standpoint, she said. “I don’t think this should be dismissed because of a P value,” said Cook. Secondly, she said the subgroup analysis where patients were stratified across the range of baseline sodium excretion levels was also underpowered, with very few individuals having a sodium intake less than 1,500 mg/day.

To highlight the disagreements between the two camps, each cited studies supporting their own point of view. In a similar analysis published in Circulation in 2013, Cook, Appel, and Whelton reported data from TOHP I and II showing that each 1,000 mg/24 hour increase in sodium excretion increased the risk of cardiovascular events by 17%.

Mente along with O’Donnell and Yusuf published data from PURE, EPIDREAM, and ONTARGET/TRANSCEND in the Lancet in 2016 showing that consuming less than 3,000 mg of sodium per day was associated with an increased risk of all-cause mortality and cardiovascular death. Those conclusions, as reported by TCTMD, resulted in the AHA issuing a public statement disputing the results.

“Everybody agrees that high levels of salt are harmful,” said Mente. “There’s no disagreement there. If you eat a lot of salt, it’s harmful. The question is, ‘What is high?’ That’s the controversy. The people who support very low intakes in populations, they believe that even a little bit of salt, anything over the recommendations, is harmful. For us, just going by the data, we advocate for a moderate-level of sodium.”

The Debate Over the Right Amount

According to Mente, the typical North American diet includes approximately 3,500 to 4,000 mg of sodium per day and this appears to be the optimal level based on studies evaluating the association between sodium and clinical events. Mente argued that the AHA and US government recommendations are based on blood pressure, which is a surrogate marker, and that focusing solely on blood pressure might lead to adverse consequences not captured by the measurement.

Cook agreed with Mente, to a certain extent. She told TCTMD there is little doubt that high levels of sodium have an adverse effect on blood pressure and cardiovascular events, and that there remains some controversy about the benefits of low sodium levels. In 2013, the US Institute of Medicine (IOM) reviewed the evidence for limiting sodium intake and concluded there were no consistent data to support lowering intake in the general population to 1,500 mg/day. The IOM also stated there was no advantage to lowering intakes in individuals who consume a moderate amount of sodium.

As part of the IOM committee evaluating the evidence, Cook said past studies have suggested a J- or U-shaped curve with sodium intake and clinical events. But these studies are prone to bias, particularly in the way sodium is measured or the populations studied, she added. There might be an “uptick” in mortality at low sodium intakes in sicker populations, particularly those with cardiovascular disease and comorbidities, she said.

Despite their differences, Cook and Mente suggest similar recommendations for the general public, at least outside of sodium. They suggest following a healthy diet rich in fruits and vegetables, being active, and not smoking, but Mente suggests individuals do not need to worry about a single nutrient like sodium. “Certainly, if you consume very high amounts of salt, then definitely you should lower your intake to more moderate levels,” he said. “But there is currently no evidence to support lowering your intake from what we eat in Western countries down to low levels as currently recommended.”

To TCTMD, Cook said the US Food and Drug Administration recently released draft guidance for industry to voluntarily reduce sodium levels in commercially processed, packaged, and prepared foods. Although the recommendations are not final, the draft suggests a “gradual reduction” in sodium content in processed foods. “I agree with the recommendations,” said Cook. “It seems if you lower sodium gradually, it’s much easier to do. One of the biggest sources of sodium in the American diet is processed foods. If those can be reduced, it will go a long way toward reducing overall sodium levels in the population.”